I'm still picking the feathers out of my hair from last night's 20th anniversary Jimmie's Chicken Shack show at Rams Head Live, where for over two hours, almost every incarnation of the band, including the original four members, rocked out more than twenty songs spanning their discography.

Pushing the Salmanilla Envelope is one of my favorite albums ever.  The consummate alternative rock record record, it teams tribal drums with searing slap bass, and crunchy guitars with aggressive, yet listless lyrics.  When I heard JCS were playing it in its entirety at Rams Head Live, I bought both a concert ticket and a bus ticket to Maryland. 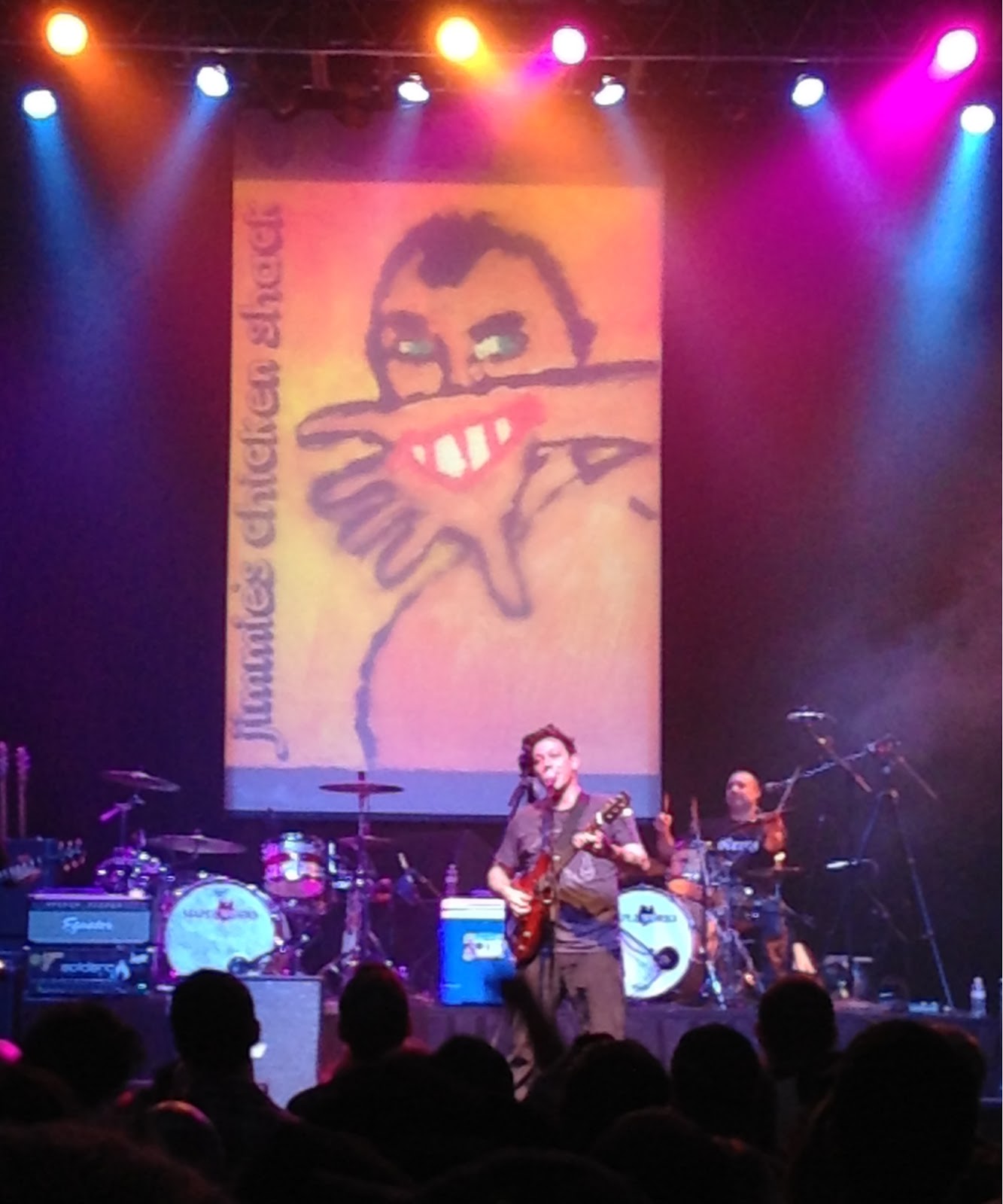 The venue filled up as HFS DJ Neci introduced the band, with the current lineup of Island Styles, Christian Valiente, Jerome Maffeo, and of course Jimi Haha taking their places on the wide stage.  Now in his mid-forties, sporting a wedding ring and a distended Frank Zappa t-shirt, Haha looked a tad older, but the years evaporated quickly as they launched into a high-energy combo of "Hole" and "School Bus."  Although the show was advertised as a celebration of 20 years of misses, you wouldn't know it from the crowd of diehards, yelling along to all the words.  After the opening salvo, Haha remarked that the show was over and you could find the band at DaveMatthewsBand.com.  "Oh, wait.  We have a couple more songs left," he teased, holding up a setlist.  "I don't always write a setlist, and when I do, it's got 20-fucking-7 songs on it."  They followed with "Sitting with the Dog" and "Outhouse," which may have been played a little prematurely considering the lineup at that point.  The audience felt so too, as things remained fairly tame, most people standing in one place as they called out the lyrics.  Jimi noticed, and said that while he didn't condone moshing, it would be nice if the crowd would collectively bounce, "always up and down, never side to side." 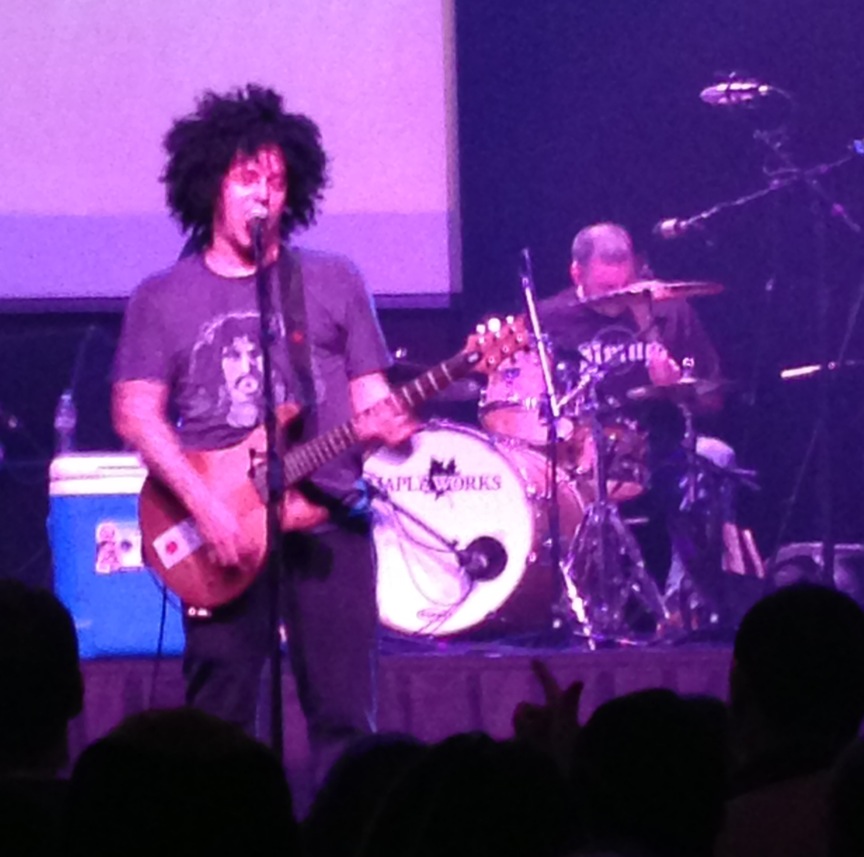 Naturally, this served as an invitation to mosh, and a pit opened up for "Dropping Anchor" that would remain for most of the show.  "This is Not Hell" had Jimi doing his classic tick-tocking back and forth during the melodic guitar intro, and afterwards, he commented that he could feel his heart and brain pounding... but in a good way.  "If I drop dead from an aneurysm, it's gonna be a fucking awesome show," he offered.  "Isn't anybody gonna yell 'Freebird' or 'Play Bliss' or something?  'Bliss' is our 'Freebird' and we haven't played it in like 15 years," he said.  And they played it in true "Freebird" fashion, with three guitars as Matt Jones joined in.  Haha messed up the start of "Mutha Luvas," and put on the "wig of shame," an Afro-puffed hairpiece.  It would be the only track off their most recent album to be performed.  Christian was traded out for bassist Derrick Dorsey to the tune of "Frosty the Snowman" supplied by Matt's guitar.  After a trio of Re.Present ditties, the crowd began to get a little restless, and started hollering out song titles.  Jimi replied, "You got 'Bliss.' We're not playing 'Inside' and we're not gonna do 'Remember' either.  If you wanna make a cover band, call it Jimmie's Lickin' Sack and you can play all the fucking songs we didn't play here."  He opened the blue cooler that sat center stage between the drum kits, procured a bottle of Patrón, and took a generous swig before passing it around.

Mike Sipple and Dave "Double D" Dowling arrived for "Pure" to usher in the Bring Your Own Stereo portion of the set, with Ché Lemon making his first appearance on "Lazy Boy Dash."  It was immediately apparent how much better a drummer Sipple is than Maffeo, and the boys played on through "Spiraling" and "String of Pearls."  Identifying  the scent of weed in the building, Haha asked that joints be thrown onto the stage.  Holding up a cigarette that was tossed, he proclaimed, "This is not a joint.  I will smoke it later, but this is not a joint."  For "Do Right," their one legitimate hit at #12 on Billboard's Top Modern Rock Tracks, Jimi updated the lyric to  "And now you see a ring" to account for his wedding band.  To heighten the drama before the finale, they slowed things down with "30 Days," marking its second performance ever.

"Let's bring out the original recipe in this bitch.  And I'm keepin' my shirt on," Jimi said, as the other founding Jims, McD and Chaney, took their spots with Haha and Ché.  After a brief history of the band's formation, they busted out "Return to Sender."  The band was back!  McD's guitarwork showed hints of the blues that the night's previous axemen did not have, and despite not having all played together in 15 years, they were remarkably tight.  "Spiderweb," as on the album, featured a rap from a beefed-up H1, and although he flubbed a couple stanzas, the energy on the floor was fucking out of control, so it didn't matter in the slightest.  "Another Day," "Blood," and "High," followed, each exceeding the next in energy.  Before the final song, Haha thanked everyone, especially his ten bandmates that made it, which were all aside from two Re.Present-era members, Casey Hean and Kevin Murphy.  He revealed that "Milk" was inspired by the fun of the Baltimore-Washington-Annapolis music scene, specifically local band All Mighty Senators. Unfortunately, AMS frontman Landis Expandis was likely hosting karaoke at Hampden's Hon Bar, but with two drummers, two bassists, and four guitarists powering through the song, as well as another H1 rhymefest, no one was thinking about those who weren't in attendance.  In true JCS fashion, there was no encore, but the band emptied out an envelope of feathers onto the crowd before posing for a few reunion photos.

Rarely do I wish that I was older, but last night was one occasion.  The first time I saw Jimmie's Chicken Shack, the lineup was the originals minus McD, who had been replaced by Double D.  After the Rams Head set, it was staggeringly clear to me that the three Jims and a Ché JCS had a chemistry that was never replicated in the band's 20-year history. 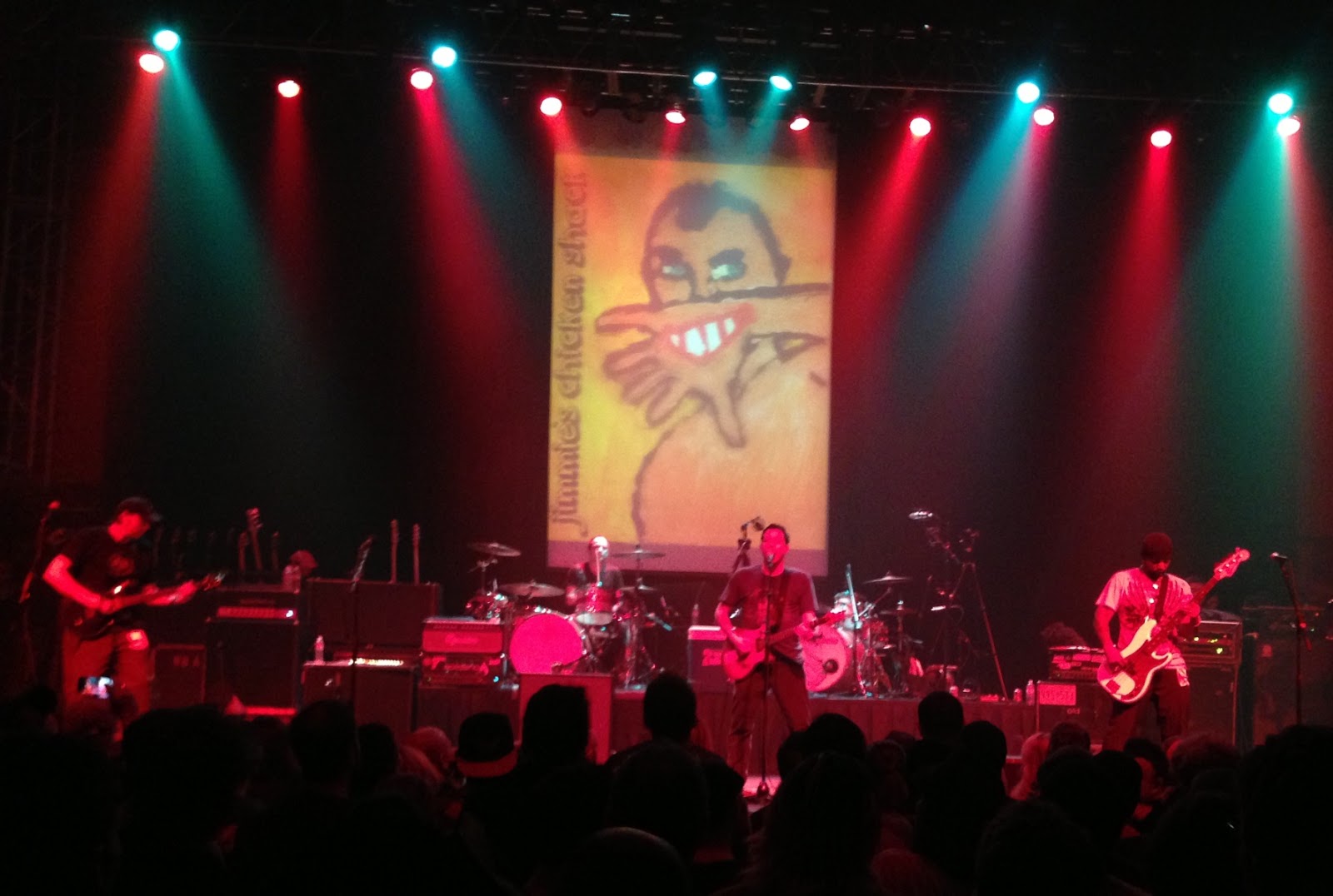