The Cody Chesnutt show was sold-out, so here's another review cobbled together from my brother's texts.

On Friday night, Gary Clark, Jr. headlined a sold-out show at Washington, D.C.'s 9:30 Club, which many people, including myself, consider one of the best clubs in the nation.  Kat Edmonson opened, but had to compete with a loud, chatty crowd that was there to see Clark.  Gary Clark, Jr., the 28-year-old guitarist, is "so hot right now" to say the least.  He burst into the public's ears last year with The Bright Lights EP, a 4-track hors d'oeuvre to the 3-week-old Blak & Blu, his major label debut.  A fixture on this summer's festival scene, Clark has amassed a legion of fans, many of whom were quick to dismiss a handful of the album's more eclectic songs as filler imposed by the label when Blak & Blu dropped in October.  What they may not realize is that GCJ released 3 albums and an EP before Bright Lights, and several of the songs on his new album appeared on them, including the hip-hop-flavored "The Life."  The only one of these records still available is the eponymous EP, which you can download from Amazon.  These documents of GCJ's past have been swept under the rug by Warner Brothers to reinvent him as the savior of the blues, hyping him up as a new artist so as to capitalize on his talent.  Only five songs on Blak & Blu hadn't been previously released before the album debuted at #6 on the Billboard chart.  His entire fall tour sold out in advance, including three shows at the Bowery Ballroom and the Troubadour.  But does he live up to the hype? 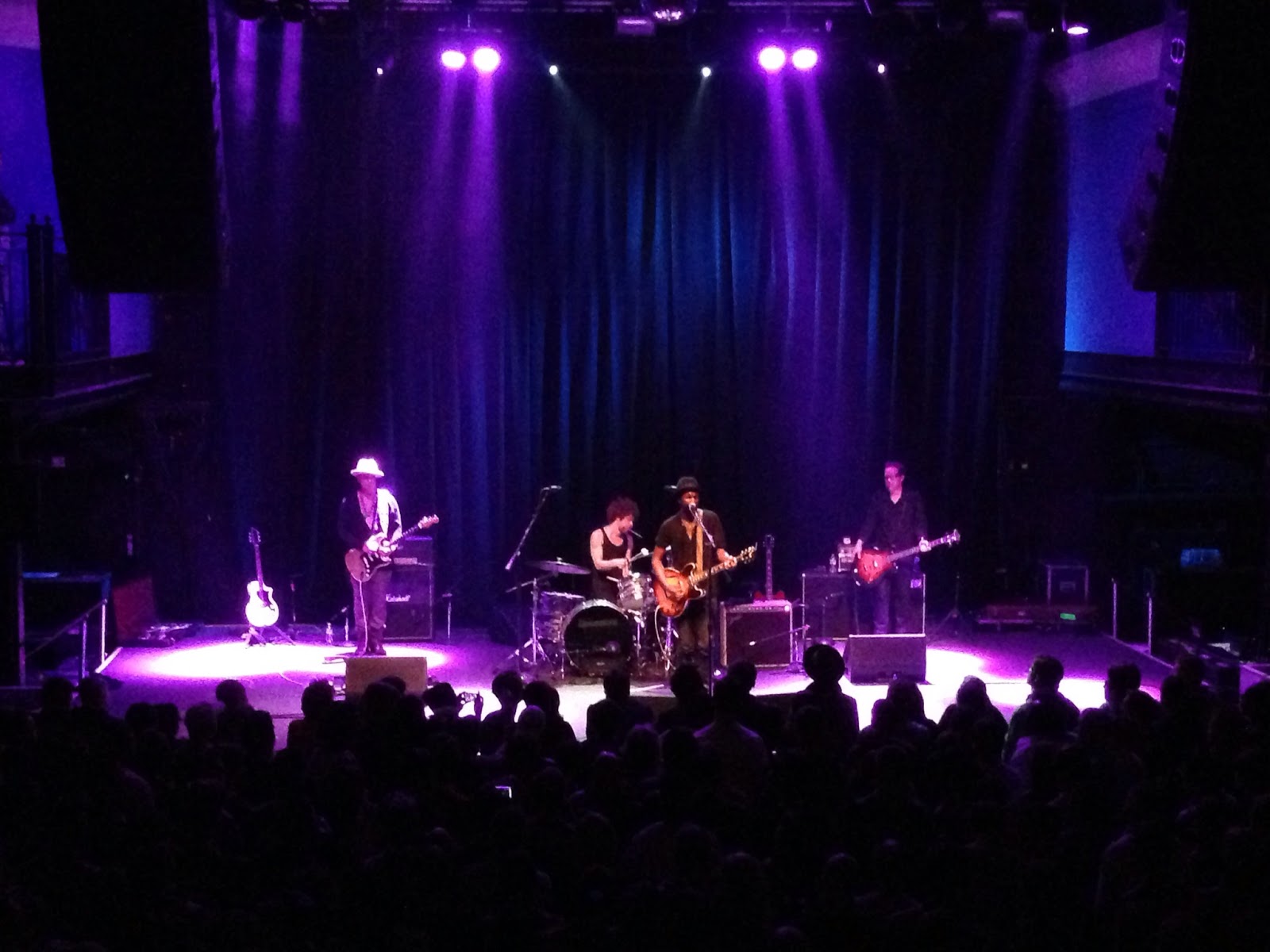 Just before 10:30, GCJ and band hit the ground running with "When My Train Pulls In," accentuated by a screeching solo that extended the song to 11 minutes.  After "Don't Owe You a Thang," Clark went with "Oh, Pretty Woman," the funky Albert King track; not the Roy Orbison hit.  My brother's favorite performance of the night came next on "Please Come Home," where Gary let his vocals, usually reminiscent of fellow blues revivalist Dan Auerbach, take a trip into Smokey Robinson falsetto territory.  Following that was "Third Stone from the Sun/If You Love Me Like You Say," the Hendrix-Collins hybrid that was immortalized on this year's Record Store Day release HWUL Raw Cuts Vol. 1, and tailed by a hornless "Ain't Messin' 'Round."  Clark paid tribute again to blues-great Albert Collins with "If Trouble Was Money."  If you don't recognize Collins by name, you may remember him from Adventures in Babysitting, where he delivered the classic line, "Nobody leaves this place without singing the blues."

A slower version of "Blak & Blu" featuring only Gary and drummer Johnny Radelat segued into closer "Bright Lights."  Gary returned to the stage alone to play a very old blues song, "When the Sun Goes Down," which was released in 1935 by Leroy Carr and later popularized by Ray Charles.  He closed with the album's single, "Numb," whose hard rock riffing inspired two crowdmembers to brawl before being escorted out by security.  When the concert ended more than 20 minutes after midnight, my brother texted, "Don't miss this guy the next time he's in NYC.  Legend in the making."

Which made me think: What constitutes a legend?  In this era of shuffling playlists, mp3s, and laptop studios, can there be legends?  When so much music is inundating the marketplace, a marketplace in which many people see no problem in shoplifting, is there room for legends?  When I think of legendary musicians, the first people that pop into my mind are Bob Marley, Jimi Hendrix, and Elvis Presley.  In "Bright Lights," Clark contends, "You're gonna know my name by the end of the night," which is hopefully true for anyone attending a show of his that sold out in an hour, but will he ever be as iconic as Elvis?  More fittingly, perhaps, is that he may become a blues legend.  Albert Collins has influenced many blues artists and would likely be considered a legend in his genre, but I had to google him to see what he looked like, and then attached him to "Babysitting Blues."  Surely we can all picture B.B. King's face in our heads, but can we readily imagine Albert King's?  I suppose only time will tell for Clark, but one thing's certain: Right now, on stage, he lives up to the hype.

I don't usually make it a point to invite people to comment, but this topic intrigues me.  What makes a legendary musician?  Who would you consider the most recent musical legend?  Do you think Gary Clark, Jr. is next?  Leave your comments below.

SET -
When My Train Pulls In / Don't Owe You a Thang / Oh, Pretty Woman / Please Come Home / Third Stone from the Sun/If You Love Me Like You Say / Ain't Messin' 'Round / Things Are Changin' / If Trouble Was Money / Catfish Blues / Travis County / Blak & Blu > Bright Lights