Phish 12/30 Review: The One Where I Surrendered to the Flow

Just a few days ago, I still didn't have tickets for the 12/30 Phish show.  Thanks to CashOrTrade.org, I was able to trade two of my 12/29 extras for a pair of 30ths... behind the stage.  I was slightly worried that it'd be too frustrating a position to really enjoy the concert, but now it pains me to think of not being there for last night's second set. 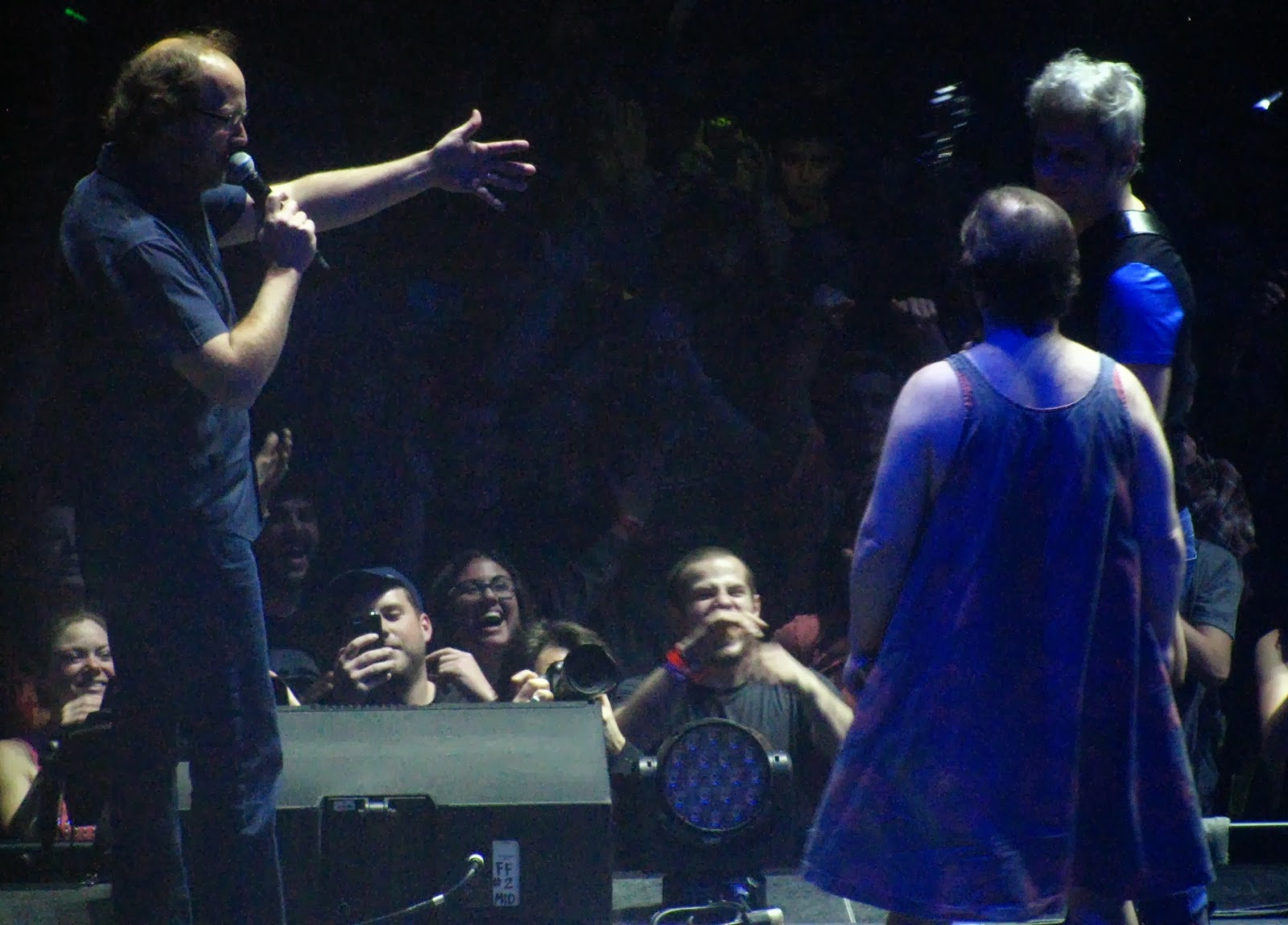 Phish began the night with "Kill Devil Falls."  It's not my favorite song, and the sound was reverberating a tad off the back wall.  I was also experiencing a certain sort of disconnect.  I'm tall, so I typically don't have a lot of trouble seeing at concerts.  My eyes are usually on the musicians: their faces and their hands on their instruments.  And I couldn't really do that from my vantage point.  In fact, I could see Mike Gordon only when his left hand ventured close enough to the headstock to hit the lowest notes.  It did, however, offer me a better view of Jon Fishman, who is usually fairly hidden behind his cymbals.  Now over his shoulder, the complexity of what my ears were hearing didn't match the simplicity of what I was seeing.  A total sensorial trick that could only be pulled off by such a talented drummer.  "Bathtub Gin" was a fun follow-up, especially the "shave and a haircut" tag at the end.  Having been stuck in my head for the whole run, "Wombat" finally reared its funky head next.  Personal desire withstanding, it was the most inspired performance in a predominantly straightforward set.  The reggae of "Yarmouth Road" was a refreshing genre change before the rocking "46 Days," which got the floor quaking beneath my sneakers.  "Lawn Boy" saw Page visiting Mike on stage left (Weirdly, also my left.), and Fishman even came out from behind his kit to join them.


When Phish returned to the stage after that song-focused first set, Mike had a yellow scarf wrapped around his neck.  I was secretly hoping it was there to keep his head from floating away in the middle of a particularly spacey trip.  Anastasio revved up the rollicking "Chalk Dust Torture," and an arsenal of cow-patterned balloons exploded from the center of the crowd.  Trey's guitar evolved into a humpback whale, searching for mates across a swirling sea.  Then Mike dropped "the brown noise," clearing the air for a short, gentle section prior to the final uptempo groove.  By this point, I had accepted my view of the stage.  I was listening to the music.  Surrendering to the flow.  "Mike's Song" developed into a funk rock piece that just begged to be made into a "Frankenstein" monster.  But they resisted, and a clunky transition into "Devotion to a Dream" kept the no-covers streak going.  I like the Wingsuit ditty, but as the newcomer, it was the obvious weakest link.  "Ghost" followed, and it was incredible to hear the arena fully singing along to a song, not just a single line or wooing in unison.  Once it reached the breakout, you could call this one Casper, because this was a friendly "Ghost."  The radiant jam took on more and more positive vibes until it couldn't contain them anymore, and ruptured into the fat bass intro of "Weekapaug Groove."  The song continued along the established sunny path until it too had to burst, this time into "Simple."  After the silly lyrical part, the band pushed forth, eventually taking the song inward.  The hive mind of these guys just astounds me; the way they rarely even look at each other (generally only for the endings of songs), but are so telepathically aligned, they can improvise a song that constantly evolves.  Bouncing along on Mike's trampoline bassline, Page and Trey twinkled on until the whole thing sounded like blissed out electronica.  Scraping some of the resin leftover from "Yarmouth," they dropped into "Harry Hood."  I think I preferred last year's version, but then again, last year I wasn't right in front of a girl screaming like Miss Piggy right before a karate chop.  Eventually it wound down to a feedback-y denouement, which most assumed would be the set's finish (My brother even left to go to the bathroom.), but Fishman crashed right into "Cavern."  "They faked me out!" yelled my brother once he returned for the singalong.  Then they faked everyone out again by descending into "First Tube" for a victory lap.  The guys took a bow, and Trey collected what appeared to be books and a framed photograph from the front row. 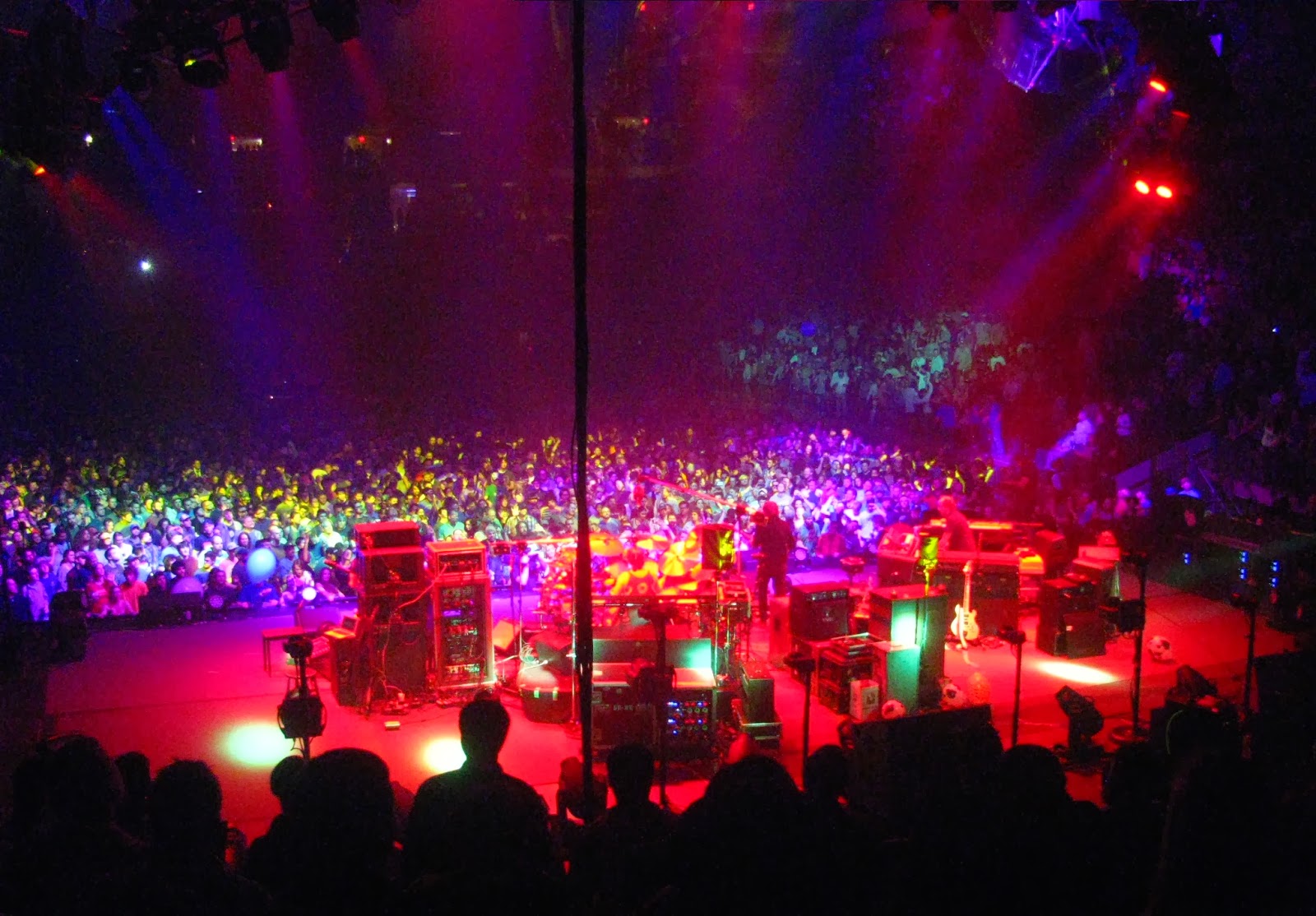 At that point, Page could've returned, played only the fart sound he finished last night's "Gumbo" with, and I would've been happy.  Instead they chose "Slave to the Traffic Light."  After such a euphoric second set, it seemed even more relaxed than usual.  It was the satisfied exhale, the cigarette after sex.  And it was my favorite Phish show.