Those disappointed in Saturday's straight-playing shouldn't have much to complain about now.  When the four members of Phish took the stage tonight, they had a mission: Start excavating some jams so in this banner year for your band, you'll be ready to attempt to make 2012 surpass '95 as the ultimate NYE MSG show. 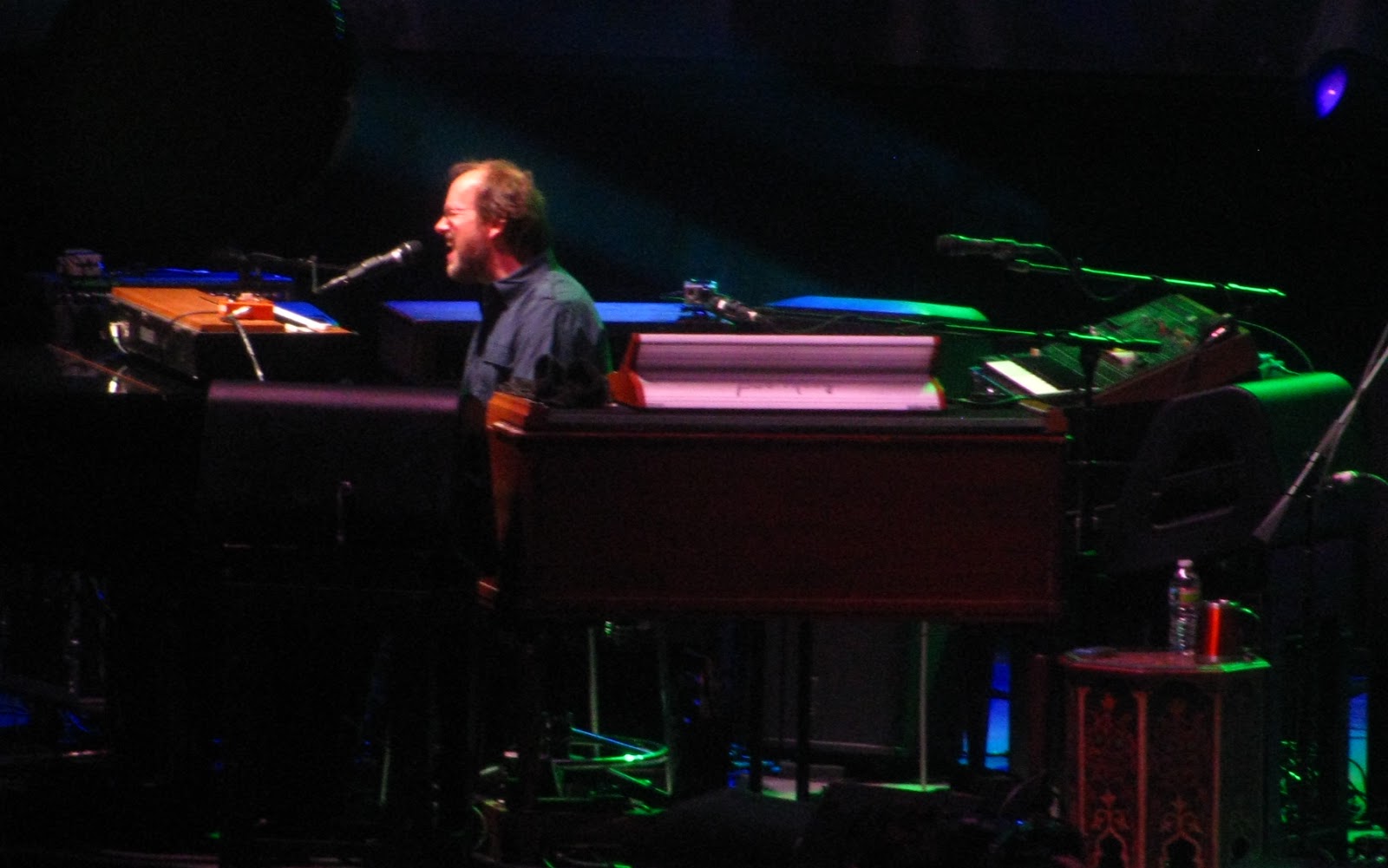 With a crowd already riled up from having just navigated a confusing new maze of barricades directly inside the entrance (not to mention having the escalator turn into stairs while you're still on it), the energy was crackling as Phish catapulted into "Runaway Jim."  When the song ended with nary a jam, many were caught off-guard.  Following with Talking Heads' "Cities," smiles erupted on faces expectant of funky exploration.  When that too passed without a jam, puzzlement.  By now, Phish had moved into "The Divided Sky," a crowd-pleaser, but with a sloppy palindrome section.  Where would they go from here?  What was going to get them grooving?  As they started "Back on the Train," you could see the crowd shift off.  Phones came out.  People tapped you so they could make their way out to the restrooms.  Even the guy next to me who'd been dancing with his arms like he was fucking Anthony Kiedis stopped.  But I'm a Farmhouse fan, so I kept wiggling.  As the song continued, I noticed more and more people getting into it, and then Trey hit on a Chuck Berry-inspired solo that had people screaming.  The band attempted to capitalize on the mood with a rendition of Blues Image's "Ride Captain Ride," but it didn't really go anywhere.  Okay, so let's try... "Ocelot?"  Those returning from the restrooms traded places with those who were saving their seats.  And then it developed into a nice full-band jam.  "Ya Mar" threw some more gas on the combustible crowd, culminating in a wonderful melodic bass solo from Gordon.  During the pounding end of "My Friend, My Friend," Kuroda left the band in the shadows, hitting the cheering crowd with strobing red lights as Trey's screeching guitar crescendoed into "Run Like an Antelope," which would finish the batch.  Who would have thought that in a set with "Jim," "Cities," and "Divided Sky," that the jamming highlights would come from "Back on the Train" and "Ocelot?"

After fighting with Anthony Kiedis over my own jacket, I went for a pee and some lobsterless mac 'n' cheese.  Returning right before the second set to find my row arm-dancer-free, I smiled.  Disarmed by the first set, we were all ready for Phish to drop the real jams on us.  Kicking things off with "Down with Disease," the boys made it through the main part, and then unearthed a subterranean monster toward its end.  Knowing glances around the room as we lapped up the amazingly funked-out puzzle where all the pieces fit properly.  A not-so-smooth transition into "Twenty Years Later" was a little off-putting, but we were basking in the DWD glow too much to notice.  The "Kashmir" rip-off of a riff that starts "Carini" bugged me a little, but the arena was so full of joy, that I accepted it as part of the journey.  Having found the beast below the crust the first time, the boys went digging deeper.  Unfortunately, most of what was heard was the sound of the drill.  They almost snuck up on the monster again from this drone-angle, but Trey scared him away with an out-of-place lick, so they decided on... "Backwards Down the Number Line????"  A literal step backwards, it was the only set two misfire, because at its conclusion, Phish boogie-woogied into "Julius" to get the whole arena dancing again.  Transitioning into frequent closer, "Slave to the Traffic Light," they sealed their second night in a row with a no-breaks second set.  Oh, and just so things could be even more awesome, Page teased "Little Drummer Boy" from night one as the song wound down.

With two delicious courses consumed, it was time for dessert.  As the reggae intro to "Harry Hood" slinked out, we knew it was a hot fudge sundae.  And then they threw the cherry on top with "Show of Life."  This year's 12/30 has replaced last year's as my favorite Phish show so far. 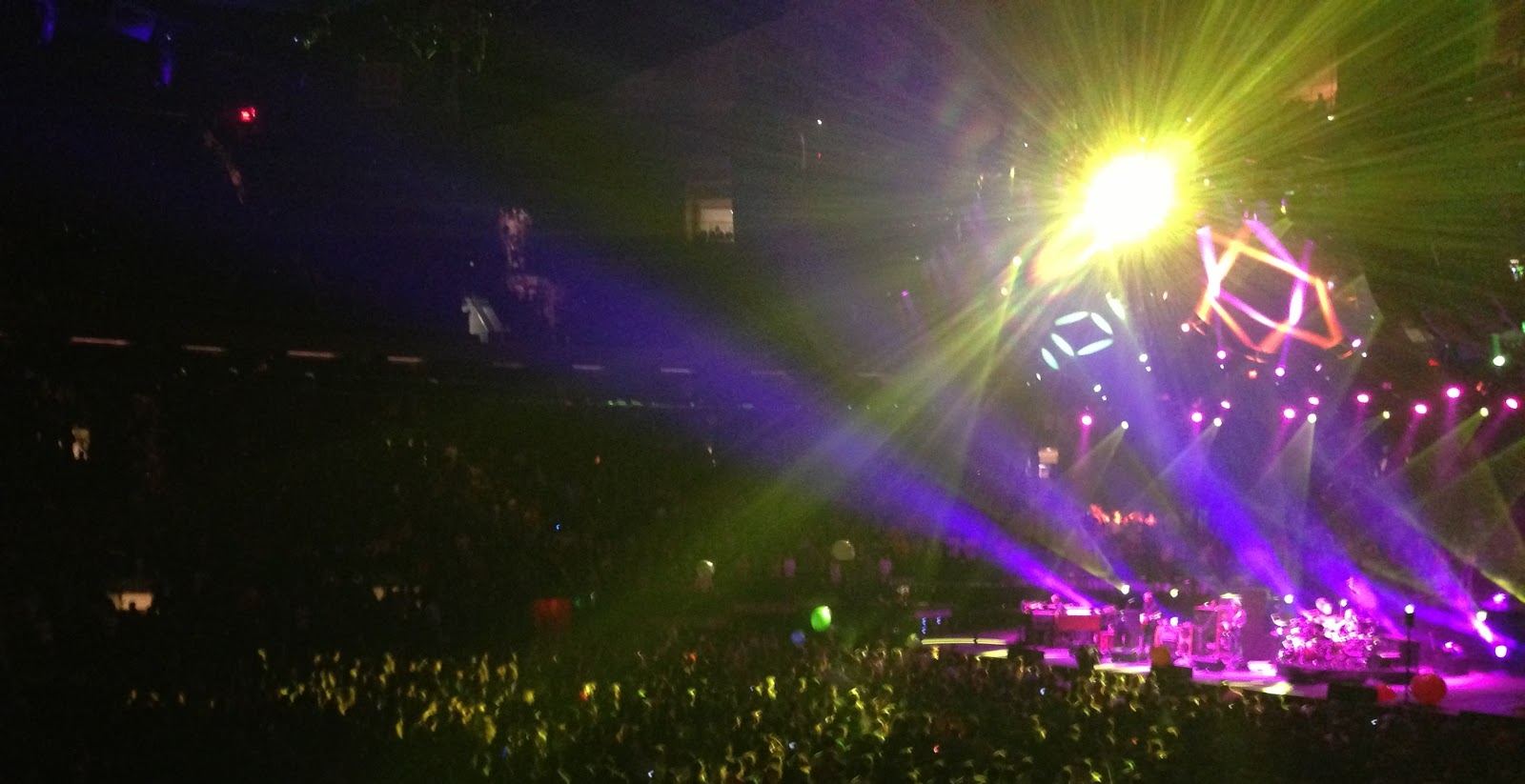 With only one show left in the so far, so good run, talk has officially turned to New Year's Eve.  What will the stunt be?  Speculations are mounting that 2010's "Meatstick" and last year's "Steam" are starting to spell out "MSG."  Will the arena be overrun with ghosts?  Are the "Drummer Boy" teases hinting at something bigger?  Even though it would be a letdown (and they've already played it), wouldn't it be funny if they did "Grind" and then the countdown happened before the total, and they'd have to do it again to account for the additional day?  See you all tonight for the exciting conclusion.

SET ONE -
Runaway Jim / Cities > The Divided Sky / Back on the Train / Ride Captain Ride / Ocelot / Ya Mar / Horn / My Friend, My Friend > Run Like an Antelope