Last night, Chad Urmston kicked off the first ever NYC Calling All Crows Benefit Weekend at the Slipper Room with a setlist voted on by the fans.  Having performed for over 15 years as part of Dispatch, State Radio, and as a solo artist under the name Chadwick Stokes (Download a free EP here.), Chad has amassed a catalog of 138 songs.  Fifteen songs, some of which had not been played in just as many years, got the solo acoustic treatment last night, leaving hardcore Dispatch fans elated, and me, well, a little let down.

The Slipper Room is a burlesque club on Orchard Street, and that's the vibe inside.  The men that work there all wear vests and have mustaches.  The women wear decidedly less, one waitress donning a Santa hat, a tasseled green bra, and a lacy thong revealing her ample posterior.  The stage itself is narrow, but the proscenium is two stories tall to accommodate patrons on a balcony level.  If you're going to a show there, arrive early to snag one of the few tables; otherwise, you'll be left standing.

Chad came out first to thank everyone for coming to the first NYC benefit, saying, "We've been skipping New York throughout the years, but it's such a beautiful city, we couldn't do it any more.  We're finally in New York and we're so psyched about it."  Calling All Crows is a non-profit organization started by Chad and his wife that builds partnerships between musicians, fans, other non-profits, and political leaders to create positive changes in the world.  Some of the organizations they work with include Oxfam America, United Way, Amnesty International, and Women for Afghan Women.  He then introduced his friend Ajax, who opened with a 28-minute set of folk that was all but completely drowned out by crowd chatter.  I looked behind me to see who was talking the loudest and discovered it was Chad's fucking roadie.  Come on, people.

Chad took the stage around 8:45, pushing aside the chair that was set up for him by his talkative tech, saying, "I'm just gonna stand."  He explained how the night's set was democratically selected by fans: "This is a night of deep cuts.  I want to warn you."  "The Story of Benjamin Darling pt. 1" came first, an unfortunately, the crowd was still talking during the song.  "Adelaide," from both Chad's solo release and State Radio's newest album, followed, and the poppy number silenced the chatterboxes.  He dedicated "Coffee & Wine," a song about his mother and father, to his godparents, who were up in the balcony.  "Indian Moon" was one of the best known State Radio songs that made the cut, confirmed by the number of folks singing along.  Chad even dropped his vocals so the crowd could have at it alone. "This one goes out to all the beekeepers in the audience," Chad said, easing into "Spider & Gioma," and abruptly stopping to reveal that spider angioma is a dermatological term for "the red thing under my brother's eye."  He frequently interrupted himself during the love story of the two bees to comment hilariously on certain passages.  "Calling All Crows" was played next, a given, considering the event, but a welcome one nevertheless. 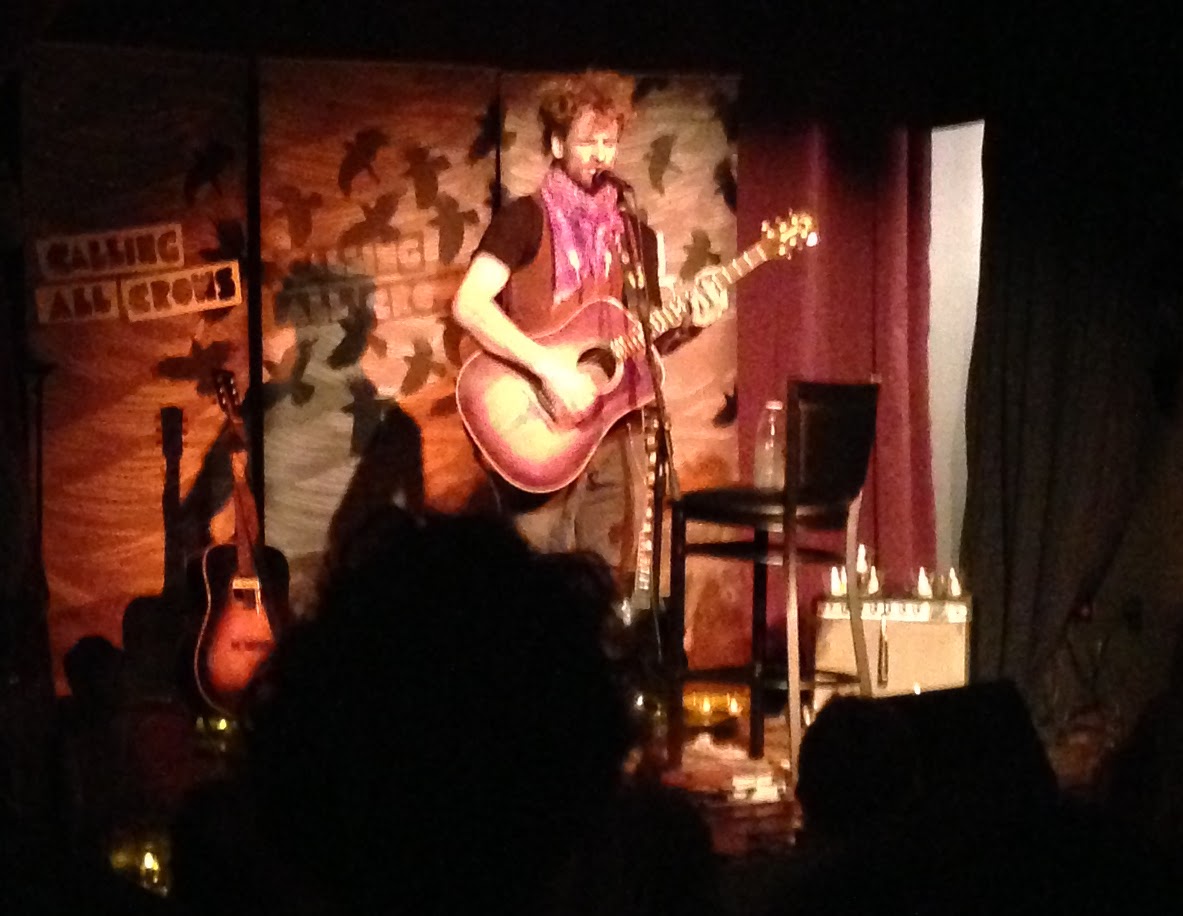 And this was where the show began to falter.  An early Dispatch song called "Gone" was up, Chad sheepishly conceding, "It's so old, it's embarrassing.  It's from my Ani DiFranco stage.  We all have one.  You're gonna hear a lot of disclaimers tonight."  Then someone requested "Out Loud" and Chad honored it.  State Radio song "Rash of Robberies" came next, with the warning: "This is one of those songs with a lot of words."  Halting during the song, he clarified that it's about a man with dementia recalling memories from his past, which ironically "makes it fucking hard to sing because it makes no sense."  "Keepsake" was a nice addition, but Chad even admitted, "We might play that tomorrow. It's better electric."  (Note: He played the same acoustic guitar the whole show, even though he had another acoustic, an electric, and his notorious oil can guitar onstage.)  "This will be a bummer for some of you, most of you. This was number one on the democracy setlist," he said, introducing "JSC" as a weird hybrid of his own words and "Heaven on Our Minds" from Jesus Christ Superstar.  "A lot of these songs are better with more shit going on," he disclosed once it was over.  He finished the set with "Hey, Hey" and came back fewer than 15 seconds later to encore with "Elias."  He again thanked the crowd for their contributions to the cause, and tossed his pick out onto the tables.

I will admit to you right now that I have never really listened to Dispatch.  I somehow skipped the obligatory Dispatch dorm room tutelage because I was a commuter for my first year of college, and then attended NYU, which had no real quad lifestyle.  Over the years, I've heard State Radio insert a few tunes into their sets, and I finally listened to Circles Around the Sun on Thursday.  I understand why superfans would enjoy hearing them, but the Dispatch ditties were not super-exciting for me.  As for the State Radio and Stokes songs, they were mainly unreleased or bonus tracks.  Sure, I like hearing a few rarities just as much as the next guy, but listening to an artist struggle to remember lyrics and guitar parts is not my ideal concert.  Chad was able to recover with his humor, but even he divulged that a lot of the tunes would sound better with a full band.  Urmston is a talented songwriter, with the unique ability to create songs from a variety of narrators' POVs, whether as an old man taking care of his wife in a nursing home in "Mr. Larkin," or Death Row inmate Troy Davis in "All My Possessions."  Forcing him to perform songs he's embarrassed about seems almost disrespectful to his craft.  Didn't you guys like everyone being able to sing along to "Indian Moon?"

So does a democratically selected setlist work?  For me, the answer is no, but like the real election: If you don't vote, you can't complain.  I didn't know about it ahead of time; otherwise, I would've put my two cents in.  Billing the show as "Chadwick Stokes & Friends" was a bit of a misnomer as well, as he has been known to perform with accompaniment from artists like Rx Bandits' Matt Embree and the White Buffalo.  Truthfully, part of me is just glad he showed up on time.  When I went to see him open for 10 Ft. Ganja Plant in Cambridge on 4/20, he showed up a half-hour late, and had to severely trim his set.

State Radio concludes their NYC trip tonight at Webster Hall, and Calling All Crows celebrates its fifth annual benefit in Boston next weekend.  The voting is still open for that Chad show, so select a few deep cuts, but pick some songs you wanna sing too.