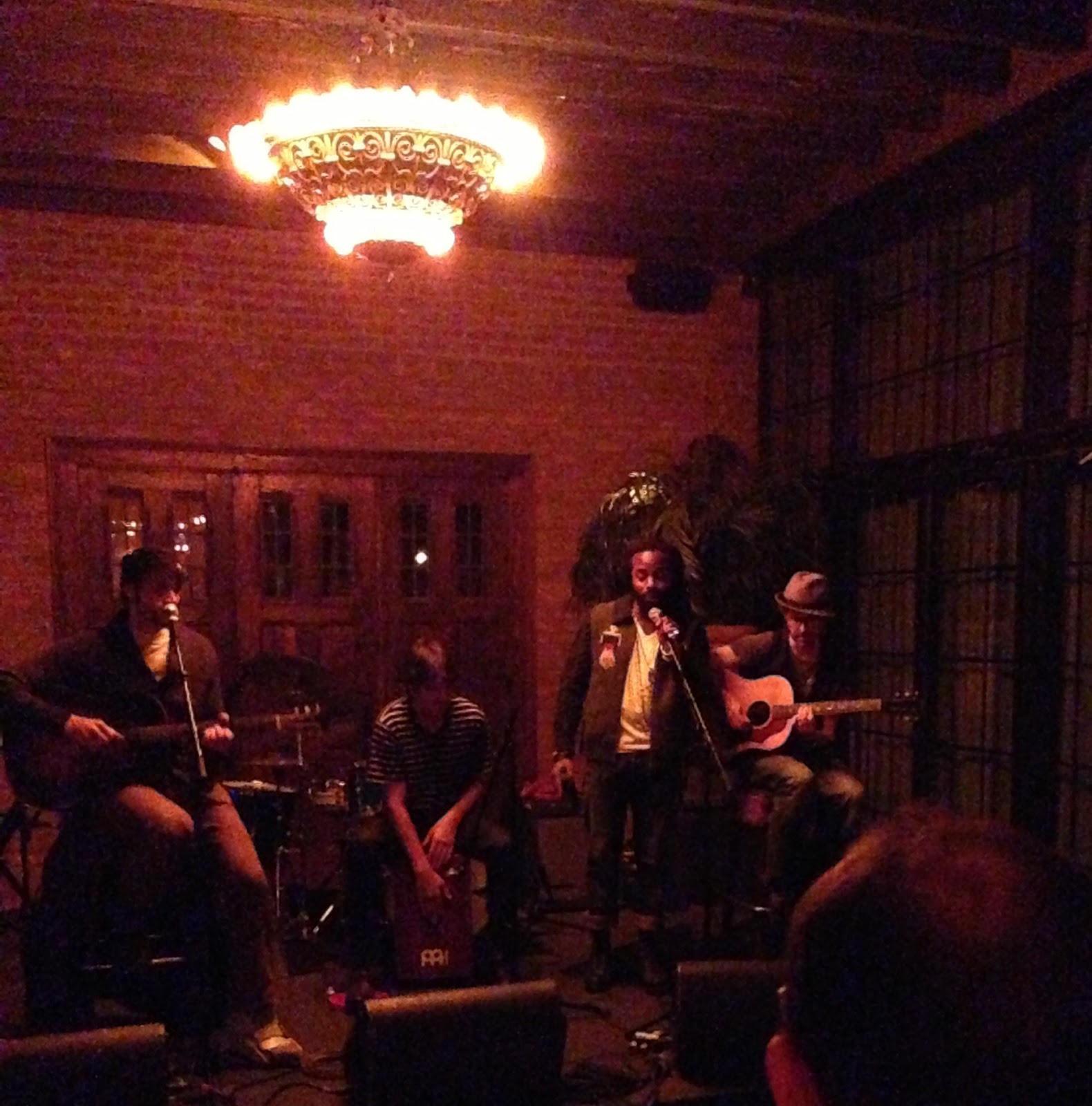 Ben Taylor ended his three-night mini-tour last night with a mini-set at the Bowery Hotel. On each night, he'd taken the stage differently, with David Saw at Rockwood on Saturday, and solo at the Standard Hotel on Sunday, so it was only natural that he start this set accompanied by both Saw and his bassist-cum-cajon-player, Benajmin "Beatzy" Thomas. What wasn't expected was that he'd open with "Rocket to the Moon," which had only been played twice, its debut on Saturday. What that shows is that Ben Taylor stands behind his songwriting. The song's abrupt ending will likely be figured out at some point. It was evident early on that this wasn't a headlining show, the talkative crowd forcing Ben to adapt and abbreivate his stories between tunes. "This is a song about a girl who wouldn't give me the time of day. Yeah," he introduced "You Must've Fallen," which had previously been a longer, more detailed story involving pick-up lines and star signs. No matter, though, for that song, which is fairly self-explanatory. However, without its setup, "How Serious Can This Be" doesn't emotionally involve the listener as much if you don't know it's about his sister Sally's top secret spy organization called Spycraft, where she took Ben on as the only baby operative when he was only one.

John Forté was in attendance, his video camera replaced with a bottle of Peroni, and he graciously accepted his vocal duties on "Hungry" and "I'll Be Gone." This crowd probably wasn't going to listen long enough to learn how to participate in "Dirty." I realize that most people were there for Menahan Street Band, but I think the lighting in the room was a huge culprit for any inattentiveness. The stage was only dimly lit by a single chandelier, and because the stage was only a foot tall, it wasn't delineated enough from the rest of the space. Lights shout "Pay attention!" but Ben was only as illuminated as he would've been in a trendy Greenwich Village restaurant's restroom. While the show was not an essential concert by any means (All songs had been played at the two prior gigs.), it was interesting to follow a band for three nights. I'd only done that once before, for Phish's 2011 NYE run (I missed the 28th.), but those shows were all at MSG. Going to different venues and seeing how they coped with different set times and different audiences, it almost felt like being in the band. Well, at least the tour reporter.

The crowd swelled to the borders of the stage for Menahan Street Band, who billed this as their album release show. Their latest LP actually came out on October 30th, but I assume whatever they had planned was cancelled by Hurricane Sandy. After the first song, organist Mike Deller stepped up to the mic, glass of liquor in hand, drunkenly slurring, "We have a brand new album that we're celebrating tonight. That bitch is called The Crossing. It's pretty badass." He proceeded to introduce new tune "Keep Coming Back," but it didn't hold a candle to the following funky one-two punch of "The Wolf" and "The Contender" that got everybody dancing. Set-closer "Make the Road by Walking" was the only song that bested that energy level, but then the band left the stage without a word, leaving their instruments behind as though they would return for an encore. Unfortunately, I was informed by my friend who works there that it was over, and the rush that came with "Make the Road" was left to dissipate oddly down the stairs and out the door into the rainy night.

(Setlist help for Menahan is appreciated.)