Ben Taylor kicked off his Manhattan mini-tour last night with an at times, too intimate acoustic performance at Rockwood Music Hall.  The show featured new songs, old faves, and a few covers of his father, Sade, and... Mary Poppins!?!

Having to fight my way through Lincoln Tunnel traffic, delayed subway trains, and an army of drunken Santas, I didn't get to Rockwood at the time I had hoped.  I was still able to snag a stool in the balcony, albeit behind a row of people.  The opener was a woman called Grace Weber, who I had never heard of before.  Thirty minutes later, I was in love with her.  A gorgeous, tall blonde, she had an incredibly soulful voice with a range so amazing, it seemed it could have only come from inside the blue water bottle she drank from, sucking the beautiful voice out and singing with it à la Ursula in The Little Mermaid.  She has some room to grow as a songwriter, (and I've probably never said this) but I think if she got on American Idol, they'd be able to turn her into a star.  Not in the young pop starlet mold that she physically encapsulates, but more along the lines of Adele.  After failing to get the vocal effect pedal to work that she'd just hyped up, and knocking her guitar into the mic stand several times, she laughed embarrassedly, "You guys are seeing my dorkiness like in full force tonight."  "We love it!" shouted someone in the crowd.  Closing her set with "Somewhere Over the Rainbow" caused me to roll my eyes a little, but as the song progressed, I listened with rapt attention like the rest of the silent audience.  Grace Weber, with the right guidance, you will go far, and please leave a comment below if you want a boyfriend. 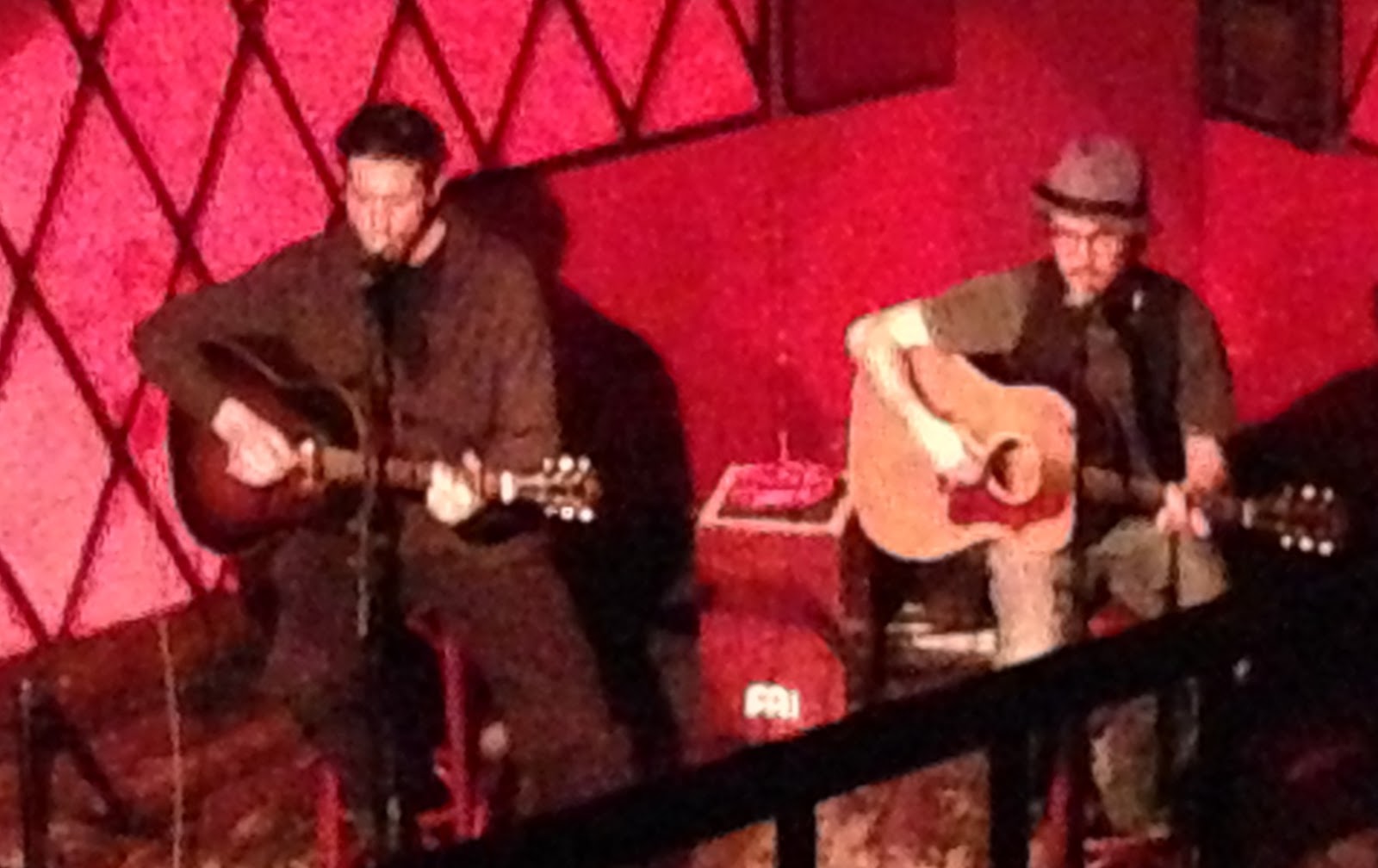 The piano onstage was lifted into the ceiling, leaving me worrying about a coyote and roadrunner-style mishap for the first few minutes of Ben's set.  After all, he was already wounded, having recently snapped his left Achilles' tendon whilst playing frisbee.  Ben was accompanied by his longtime friend/collaborator David Saw, and the duo's guitars harmonized so sweetly, you'd have never known they'd been off-tour for two months.  Ben paused between each song to give a little background on it, and introduced Sade's "By Your Side" as having been recorded for a top-secret TV appearance.  They sang "Worlds Are Made of Paper" with the line in the chorus changed from "Nothing lasts forever" to "Nothing lasts for apples" because Saw was smitten by a young child's YouTube rendition.  They followed that with a brand new song, a spicy little number which I'm going to call "Rocket to the Moon."

Those in the know spotted songwriter/producer of Fugees fame, John Forté, seated in the front row.  Busily sipping wine and videotaping the show, Ben asked if he wanted to join in, but Forté shook his head.  "We'll work on him little by little.  We're gonna sing the songs he normally sings, and we'll sing them so badly that he'll not be able to take it anymore," said Ben.  Enlisting the crowd's help on "Dirty" and providing Forté's rap himself, Taylor tried to work on him too quickly, but it was a great laugh for the audience.  The beat provided by Ben's bassist Benjamin Thomas on cajon, Taylor played new song "How Serious Can This Be" and segued seamlessly into his father's "Lo & Behold," the first time I've heard Ben cover his dad.  John Forté put down his camera and took the stage for two songs, "Hungry" and "I'll Be Gone."

Ben designated the next part of the show to be his family's portion, starting it off by recalling the time his mother inquired, "Write a song telling me how much you love me."  When Carly Simon requests you write her a song, you oblige, but you've got to take your time.  As the years passed, she kept asking if songs he'd written about other women were about her, to which he'd reply, "Did you even listen to it? That's gross."  Eventually settling on "Nothing I Can Do," Ben admitted, "I wrote this for my mama 'cause she's my archetypal woman."  The most interesting songwriting tale that I hadn't heard yet, however, was the one for "Oh Brother," written for Ben's younger twin brothers.  He sang the song over the phone for James, who cried and revealed, "That's so beautiful I wish I'd written that for them."  Still without a bridge, Ben offered it to his father, who excitedly took the task.  Two months later, Ben still hadn't heard back, so he reminded his father again.  James accepted, but only if Ben would hum a melody over the bars, so James could write the lyrics.  To mess with him, Ben recorded, "If we could only get some of that old good time JT shit right here," following it with a series of "no's" in James' signature scatting.  "My dad's the only old man who gets happier the more times he says no," Ben laughed, and demonstrated.  Playing the track for James, the legend responded, "That's a great fucking lyric," and the bridge remained the same.  Ben also tacked on "Jolly Holiday" from Mary Poppins to the family section, in tribute to a foxy nanny he once had named Mary.

The funny banter and excellent sound in the tiny space increased the intimacy level to a comfortability where fans would answer Ben's rhetorical questions or shout out questions of their own.  While that could get a little annoying, it was only encouraged by the candidness Ben was displaying, making announcements like, "Ladies and gentlemen, Benjamin Thomas is going to urinate."  He told the crowd straight-up, "You can clap and clap all you want, but once I leave this stage, that's it because I can't get back up," motioning to his leg.  He finished things off with "I've Known the Garden," and retreated to the hallway to talk with fans and sign CDs.