Phish dove into the jams early for their third consecutive New Year's run at MSG last night.  Before I go any further, I'd like to advise the reader that I am not a tie-dyed in the wool Phan.  Last night was my fifth time seeing Phish, and every time has been at the Garden.  That being said, I do review concerts, so I'm going to every show in the run and will be chronicling them here.  Basically, don't jump down my throat if I was impressed by what you considered a ho-hum version of a song you've seen them play 50 times.  Discussion is welcome in the comments, however.

I was fortunate enough to have seats in the highest suite, directly opposite the stage, so I got a great bird's eye view of everything.  I felt like an emperor... or at least Evita.  At 8:20, when Phish took the stage, the Garden still wasn't full.  If you had GA West tickets, you could feasibly approach the fourth row from the stage.  I think they surprised most people who took opener bets when they launched into "Stealing Time from the Faulty Plan," which I never would have banked on.  Thirty seconds in, MSG was filled to capacity.  Having not performed together since September's incredible Dick's run, the boys literally got off to a faulty start, not reaching some high notes in the next few songs or necessarily meshing like they can.  The sound could have just been different at the venue's apex, but Paige's organ was too shrill, and Trey's guitar was too hot. 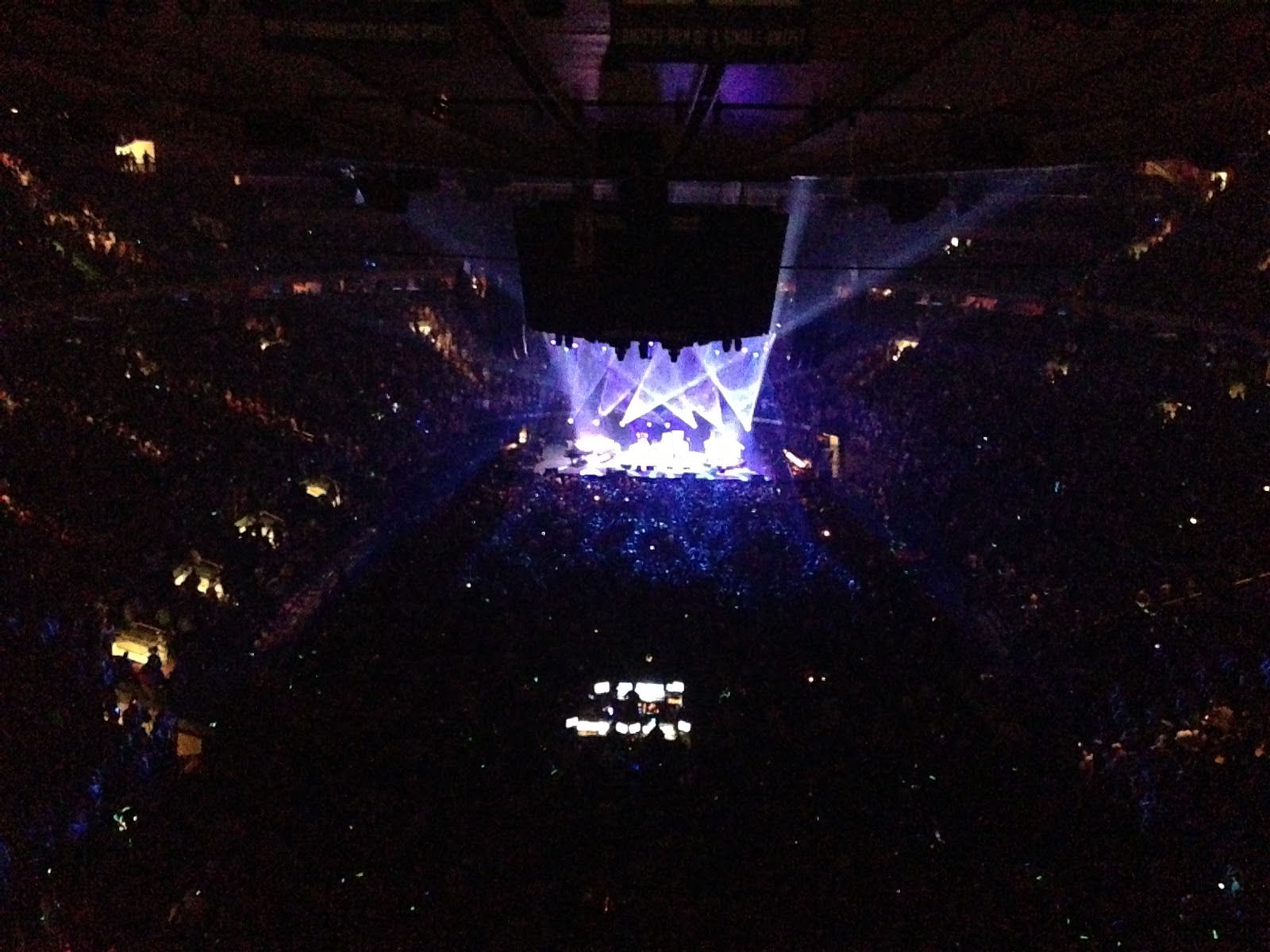 Five songs in, they found their way with "Tube," segueing into a jammed-out "Stash," which really opened things up for the set.  The second part of "Kill Devil Falls" was urged along by Chris Kuroda's excellent lighting design, and "Free" brought the house down.  The show's shining moment came next, with a funky "Wolfman's Brother" delving into "The Little Drummer Boy."  Three days removed from Christmas, the holiday classic was still fresh in our minds, and everyone had to smile as they brought it into the mix and returned to "Wolfman" at the perfect time before it got cheesy.

One set down, and it got increasingly better.  What would they have in store for us next? We popped down into the concourse in a lower level, but returned to the suite once we saw all the lines.  The private bathroom and beer delivered in a bucket are definite perks to the suite life.  At 10:18, Phish regrouped and started the second set with "Tweezer," sending the guy with the TWEEZER sign behind the stage into a frenzy.  When Kuroda switched on the brights to illuminate the crowd, puffs of pot smoke shot up like geysers all around the arena.  The jammy "Tweezer" eventually ran into a "Maze," and when they finally got to its end, they found not cheese, but another "Little Drummer Boy."  Fishman hadn't gotten a chance to solo in its prior appearance, so he got to run with it a little before they oozed into "Twist."  They revisited "Drummer Boy" at the songs finale before slinking into "Theme from the Bottom," which seemed a slightly odd choice.  Two jam odysseys "Fluffhead" and "David Bowie" closed out the second set by 11:37. 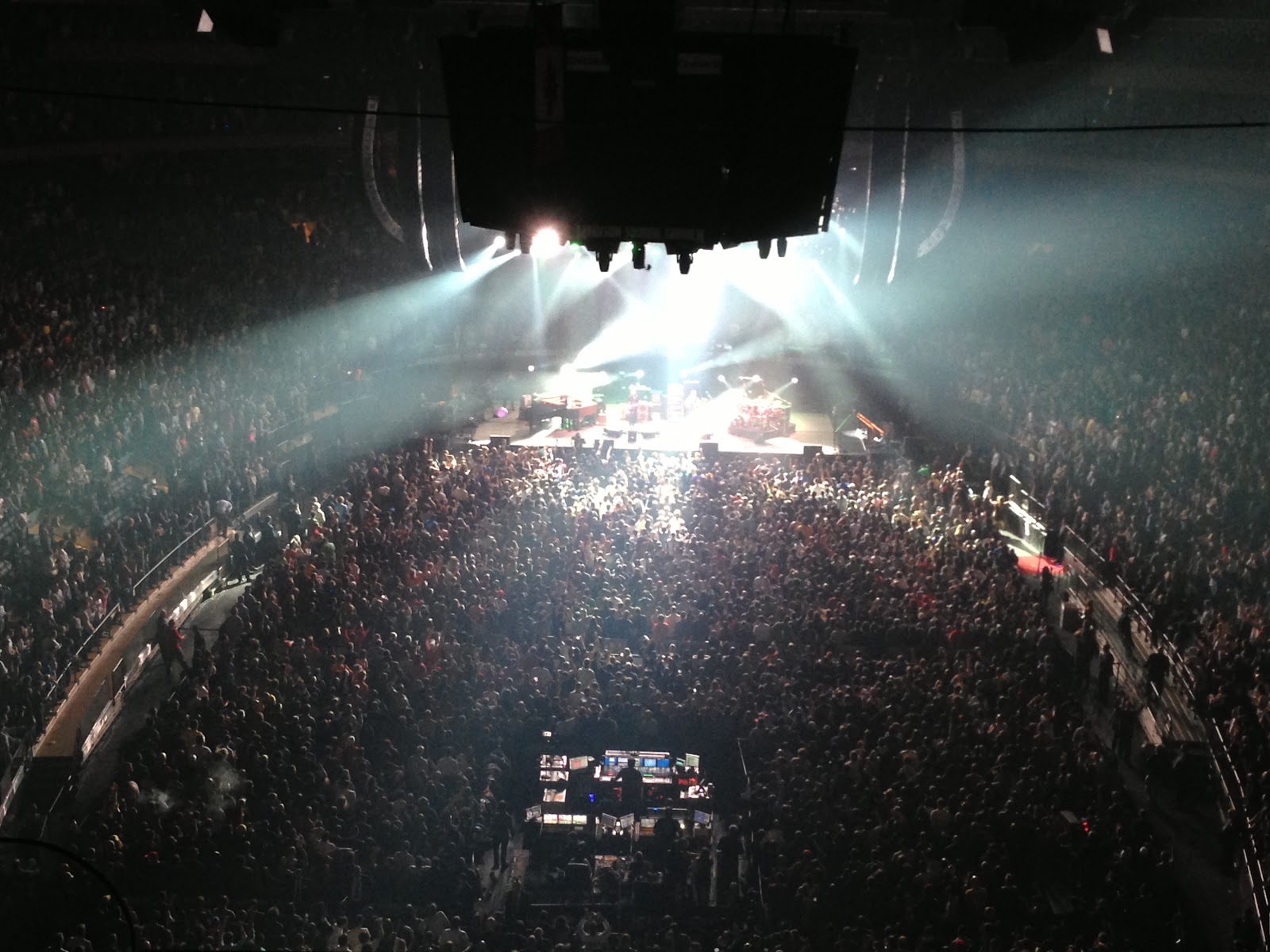 Three minutes later, they returned for an encore of "Bouncing Around the Room," a happy memory for all, but essentially a pop song.  Led Zeppelin's "Good Times Bad Times" followed, somewhat disappointingly for me, who was hoping for "Tweezer Reprise" with another "Drummer Boy" tease to wrap things up with a Christmas bow.

I went the 29th-31st last year, but missed the 28th, which several have claimed was the only good show in a shitty run.  Hopefully history doesn't repeat itself this year.  I'm gonna go check out Mr. Miner to find out how I did, and I'll see you tonight.

ENCORE -
Bouncing Around the Room / Good Times Bad Times
at 4:18 AM