We woke up to sunshine at our hotel, optimistic for the final day of the festival.  We'd be seeing full sets instead of splitting our time between performers, and it was finally warm out!  We took a MATA bus that drove past Sun Studio on its way downtown, but that was the last sun we'd see all day.  When we got to Tom Lee Park, the clouds rolled in and the wind whipped the snot right out of my nose.  But after Friday, it was a relative cakewalk.  We set out for the Bud Light Stage, where we'd be watching three consecutive acts. First up were the Kingston Springs, who I'd first seen supplying some gorgeous harmonies to Rayland Baxter's "Olivia" in this video.  Left to their own devices, however, the Tennessee band are rockers.  Sure, that rootsy Nashville sound is present, but on "Sweet Susie," Ian Ferguson sounded a lot like Jack White (although I guess Jack's been picking up that Nashville sound too).  The vibe was friendly and relaxed, with long-haired bassist Alex Geddes asking the crowd, "Anybody out there getting drunk today?  We are."  Ian expounded, "We got off to an early start. We already finished all the beer in our trailer."  "So whoever heard that, bring us some more beer," added Alex with a smile.  The boys were accompanied by some squealing harmonica on "Lover," courtesy of Patrick Weickenand, who used to play with War.  They clapped it up on the chugging "1991," which was enhanced with a little trumpet from James Guidry, before they closed it out with the hard-edged "Lowest of Animals."  I would've bought a vinyl if I didn't have to carry it all day. 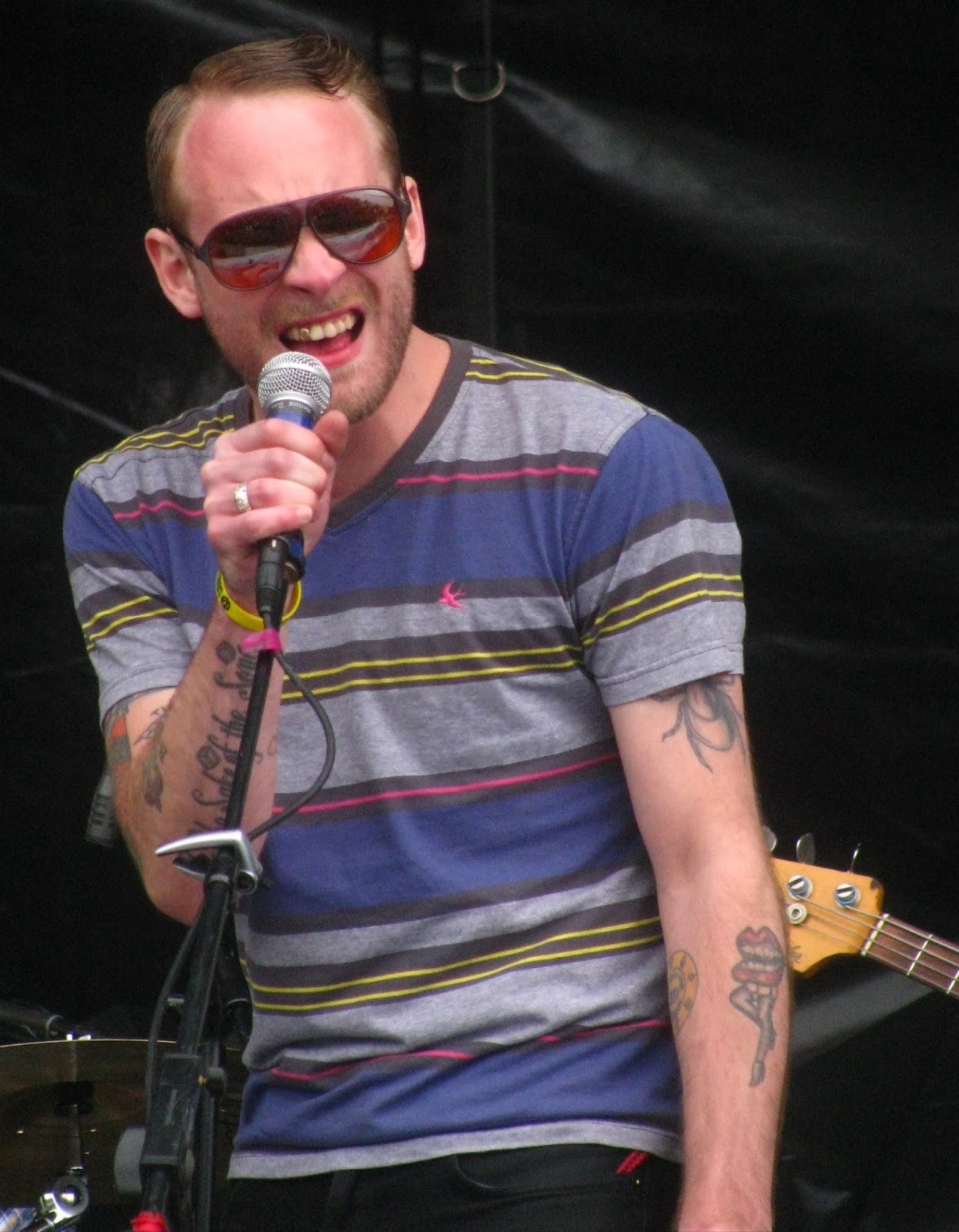 And who wants to carry anything but two beers during a Deer Tick set?  They kicked things off with "The Bump," John McCauley punctuating "They call me the Bump" with a long snort on the microphone.  They weren't entirely satisfied with the sound (or lack thereof) coming from their monitors, but McCauley skillfully worked in his "Hey! Hey!" mic-checking to the transition into easily the best "Easy" I've heard.  After playing the catchy "The Dream is in the Ditch," Ian O'Neil asked the crowd, "How was that?  Because I couldn't hear it," which was kind of nuts, considering the mix offstage was the best of the festival.  As the technicians tried to remedy the issue, McC admitted, "We're the problem children at every festival," following it with a few Bon Scott screams of "Problem child!"  For new number, "Really Just Friends," John put down his guitar, singing at the mic while holding a beer can and a cigarette like a white trash Sammy Davis, Jr.  "If I was you, I would be watching Public Enemy right now," he confessed.  But then I would've missed the funky keyboard jam in "These Old Shoes" that briefly turned into "Superstition."  After a winning "Ashamed," McCauley said, "Happy Cinco de Mayo, bee tee dubs."  The band crept into "Sleep Walk," and although I knew what Mexican treat was coming next, most in the crowd were delightfully surprised when they launched into their fully Spanish cover of "La Bamba."  It was one of the top sets at the festival that I'm sure resulted in dozens of new Deer Tick fans. 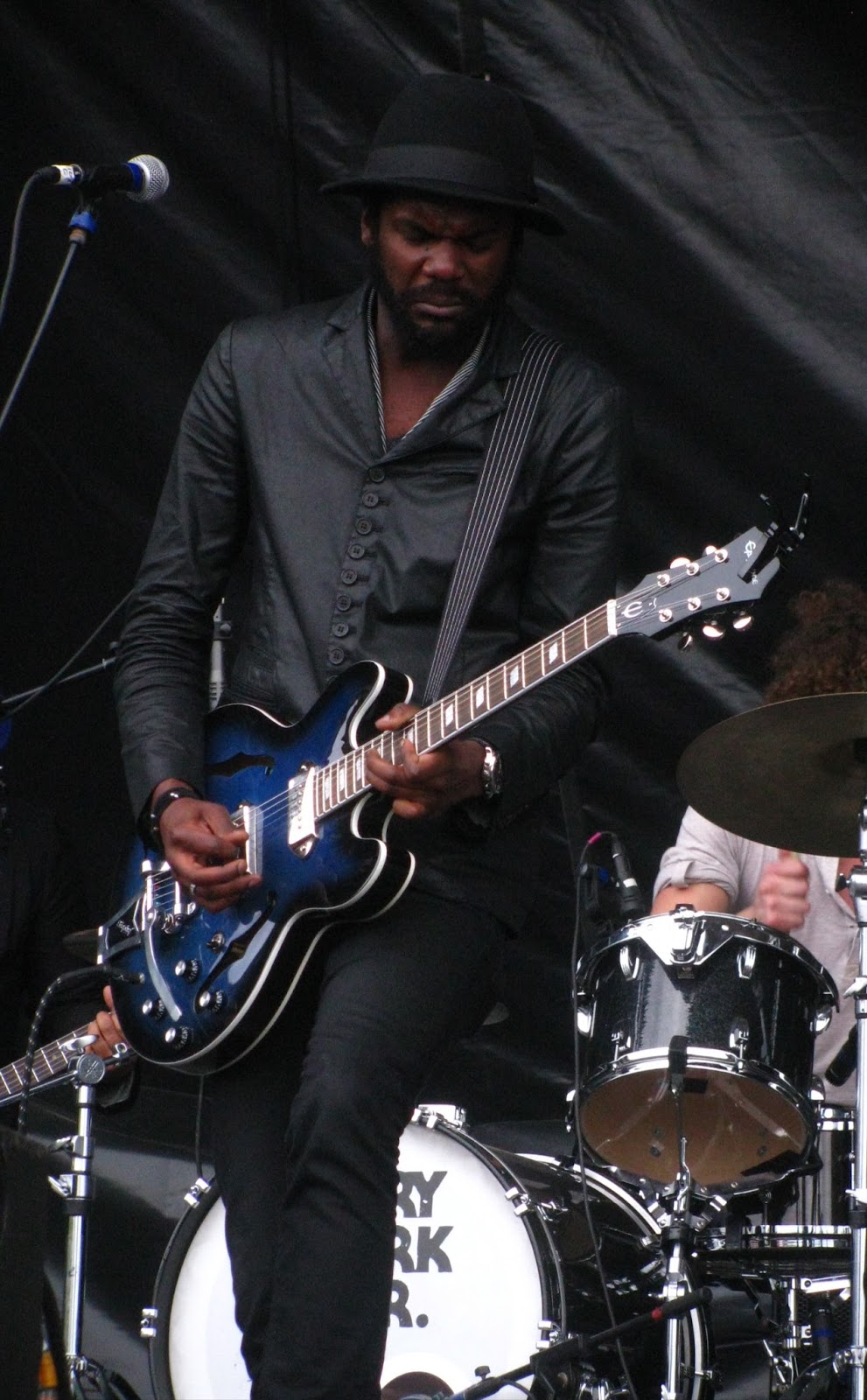 My brother had pinned Gary Clark, Jr. as a "legend in the making" when he saw him at the 9:30 Club, so it was time to see for myself.  Gary walked onto the stage, picked up his guitar, and smiled briefly before asking the eager crowd, "Y'all ready?"  We all clapped like we were, but no one was prepared for the 13-and-a-half-minute "When My Train Pulls In" he pulled out.  Gary Clark spent half of "Please Come Home" crooning in a sweet falsetto, and the other half ripping into his guitar, with members of Kingston Springs and Deer Tick watching studiously from the wings.  "Travis County" and "Ain't Messin' 'Round" charged up the audience for the set's biggest moment, Clark's reinterpretive "Third Stone from the Sun/If You Love Me Like You Say" medley.  While returning to "Stone" from Collins' song, Clark transmogrified his six-string into a turntable, scratching out a string-breaking solo that dropped jaws.  "Y'alright?" Clark asked with a wry grin.  Because we'd only just gotten a taste of Albert Collins, GCJ covered the bluesman's "If Trouble Was Money."  It was nice to hear so much Collins after seeing his guitar on the wall at Rum Boogie Cafe on Friday.  He finished with "Bright Lights," and you could be damn sure that everyone in the constantly growing crowd knew his name by the end of the song.  In fact, I bet you could edit the entire concert together from all the iPhone footage that was taken.  "Well, it's been fun. Thanks for listening to me," he said bashfully at the song's end.  While he did seem shy with the banter, there's no doubt the man has stage presence.  His band spent the entire show flanking the drum riser, so it may be a bit forced, but this towering figure in front, grimacing in pain at the emotion he was dispelling out of his fingers and onto the strings is exactly what the blues are about.  I foresee a brass note on Beale St. in his future for sure.

I was excited to see many of the bands at the festival, but after hearing Phoenix's new album Bankrupt!, the French band stood out as number one.  They kicked things off with "Entertainment," pumping me up for a set of new tunes.  Thomas Mars counted off, "Un, deux, trois," and the band launched into "Lasso."  "Lisztomania" had the crowd going crazy, but not as much as I was while screaming out the chorus to "S.O.S. in Bel Air."  They followed that with "Love Like a Sunset" with a hunk of "Bankrupt!" squeezed in the middle, a mash-up some have taken to calling "Sunskrupt!"  When the first verse of "Too Young" gave way to "Girlfriend," I finally noticed a saddening trend: They weren't just favoring Wolfgang Amadeus Phoenix; they were playing the entire album.  Don't get me wrong; I like the record.  But it's not on the same level as It's Never Been Like That or Bankrupt!  In recent interviews, they'd discussed the possibility of failure after the success of Wolfgang, so it seemed too safe of them to play the album in full here.  In spite of the song selection, they sounded excellent and put on a great show.  Mars climbed offstage and onto the barricade mid-"Armistice" and stayed there for all of "1901."  He even took the opportunity to crowdsurf a little during the encore.  Fortunately, his shoes didn't appear to be muddied. 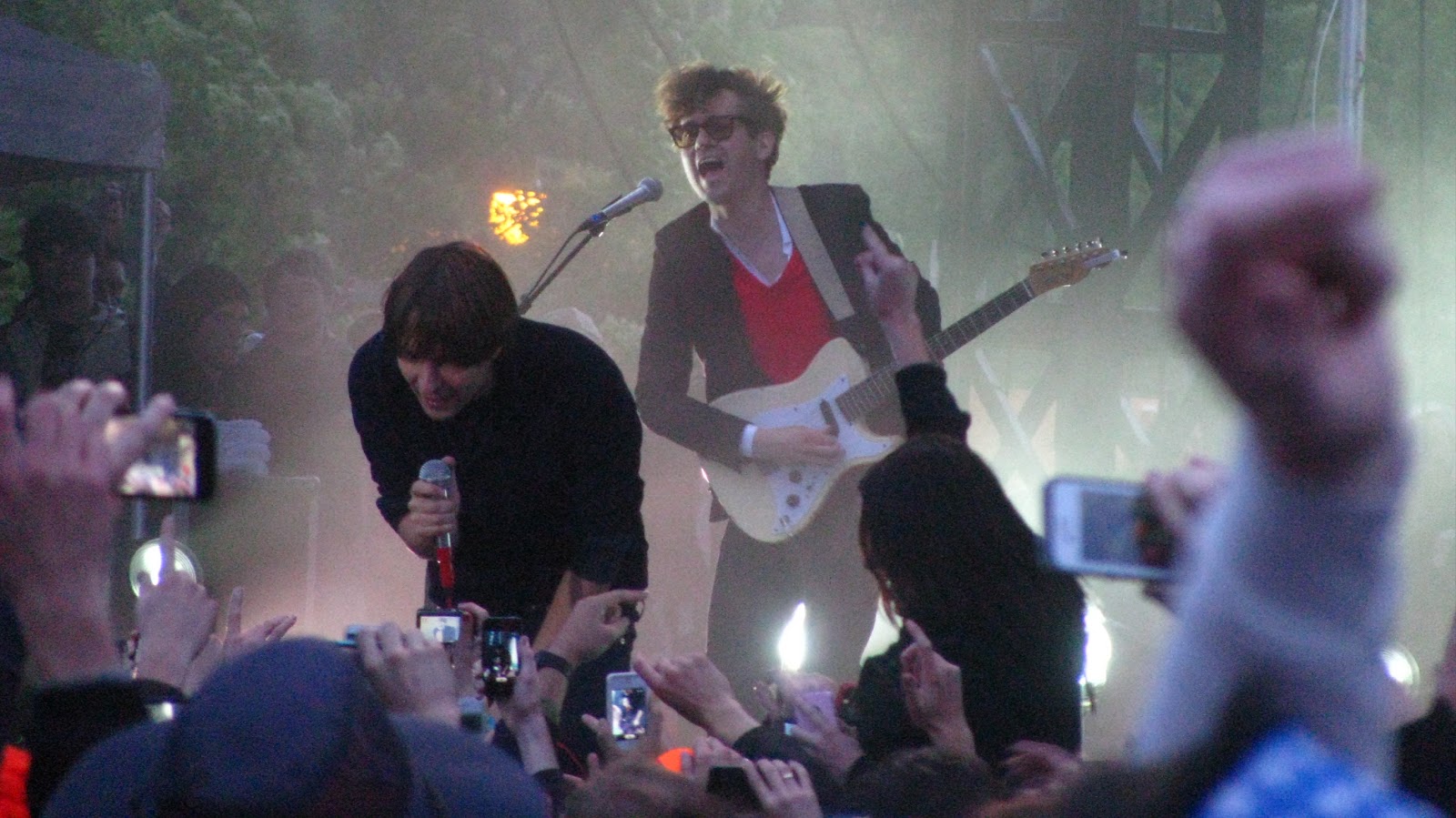 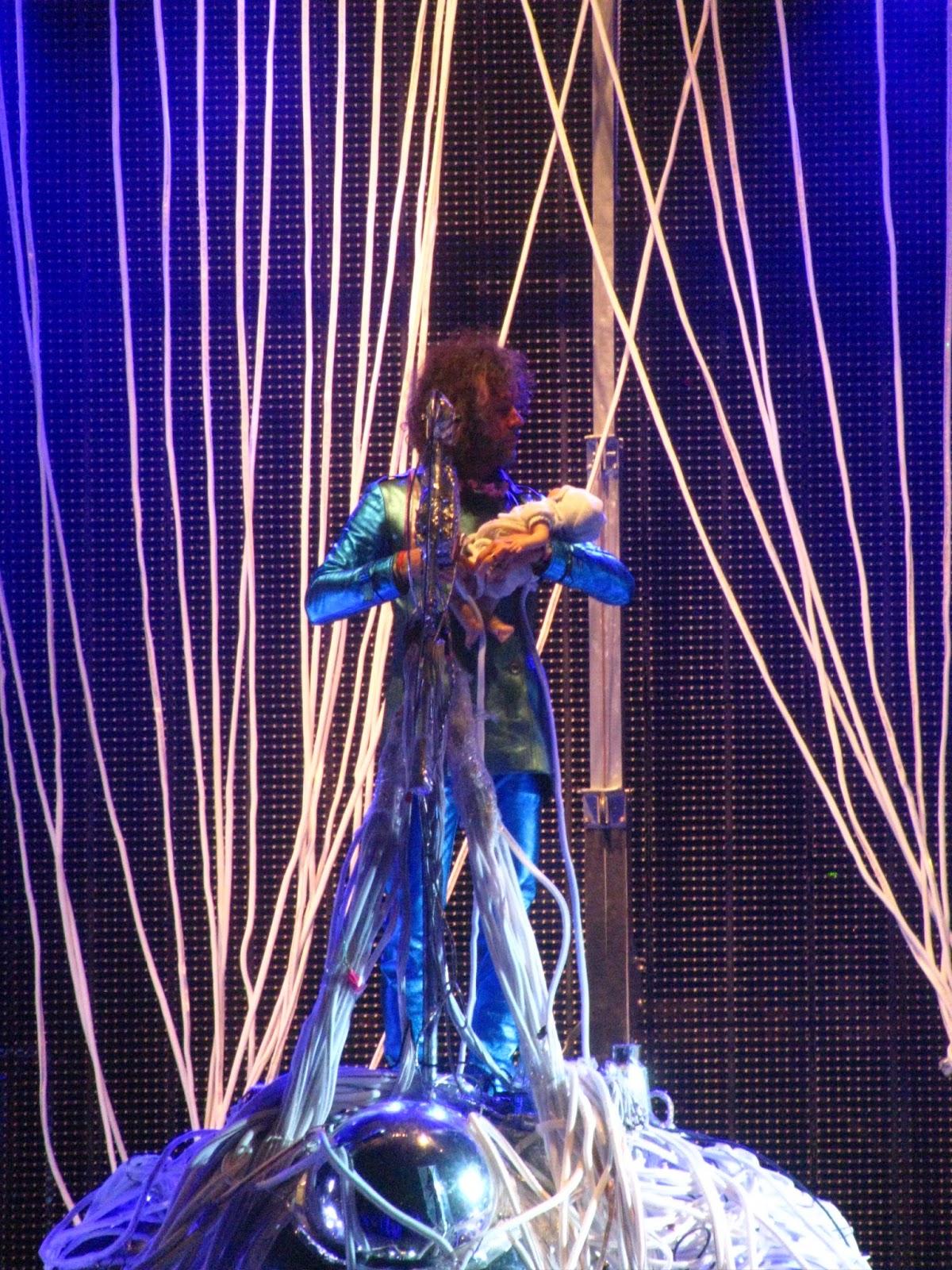 If I'd been hoping that Phoenix would play their new album, it was the complete opposite for the Flaming Lips.  My first listen of The Terror was disappointing, finding it to be somehow both abrasive and boring.  But I'd only ever seen them play a few songs at StePhest Colbchella, so I wanted a full FLips set.  I even had a backup plan: If things get too weird, just go watch the Black Crowes.  Things got weird alright, but it was an engrossing live experience that demanded my attention.  Flaming Lips shows have always been strange, but they may have been getting too cuddly with people dressed as life-sized stuffed animals, "She Don't Use Jelly" singalongs, and Wayne Coyne crawling across the crowd in his space bubble.  If that aesthetic was an all-embracing, stoned lovefest, their new one represents a harsh acid trip.  From a four-foot-tall platform amid a nest of sparkling tubes and silver globes, Coyne coddled a baby doll while he sang over the nightmarish groove of "Look... The Sun is Rising."  At the song's end, he informed us, "This baby's sleeping," and set it aside for a louder, more frightening version of "The Terror," the screen behind him rapidly hurtling through a succession of sharply toothed mouths.  It was audacious and horrifying. The relief of the crowd was audible when the band kicked into "The W.A.N.D." but that didn't stop Wayne from shining a spotlight into fans' faces.  The assault on the eyes continued later with "Try to Explain," when the lighting rig lowered to eye level and continuously strobed red into our retinas.  It was annoying and yet mesmerizing.  The dichotomy of Wayne's banter and the eerie songs was interesting.  Aside from a kooky tangent about a girl in the front being an alien who was there to see Phoenix, he spoke pretty much like a normal guy.  "How you all doin'? My fuckin' pants are too tight," he said, tugging at his waistband.  Well, I guess the invocation about the Mississippi River was a little bizarre too: "We're gonna command it to just fucking overtake us.  See you guys swimming together.  That fried chicken stand over there is where we'll all huddle together."  Then, back to tormenting us with menacing music.  And just when you weren't sure if you could take any more, they dropped a Yoshimi classic like "One More Robot" or "Do You Realize??"  I'm actually excited to revisit The Terror now that I have some visual mindfucks to accompany it.  Nice job, Flaming Lips. 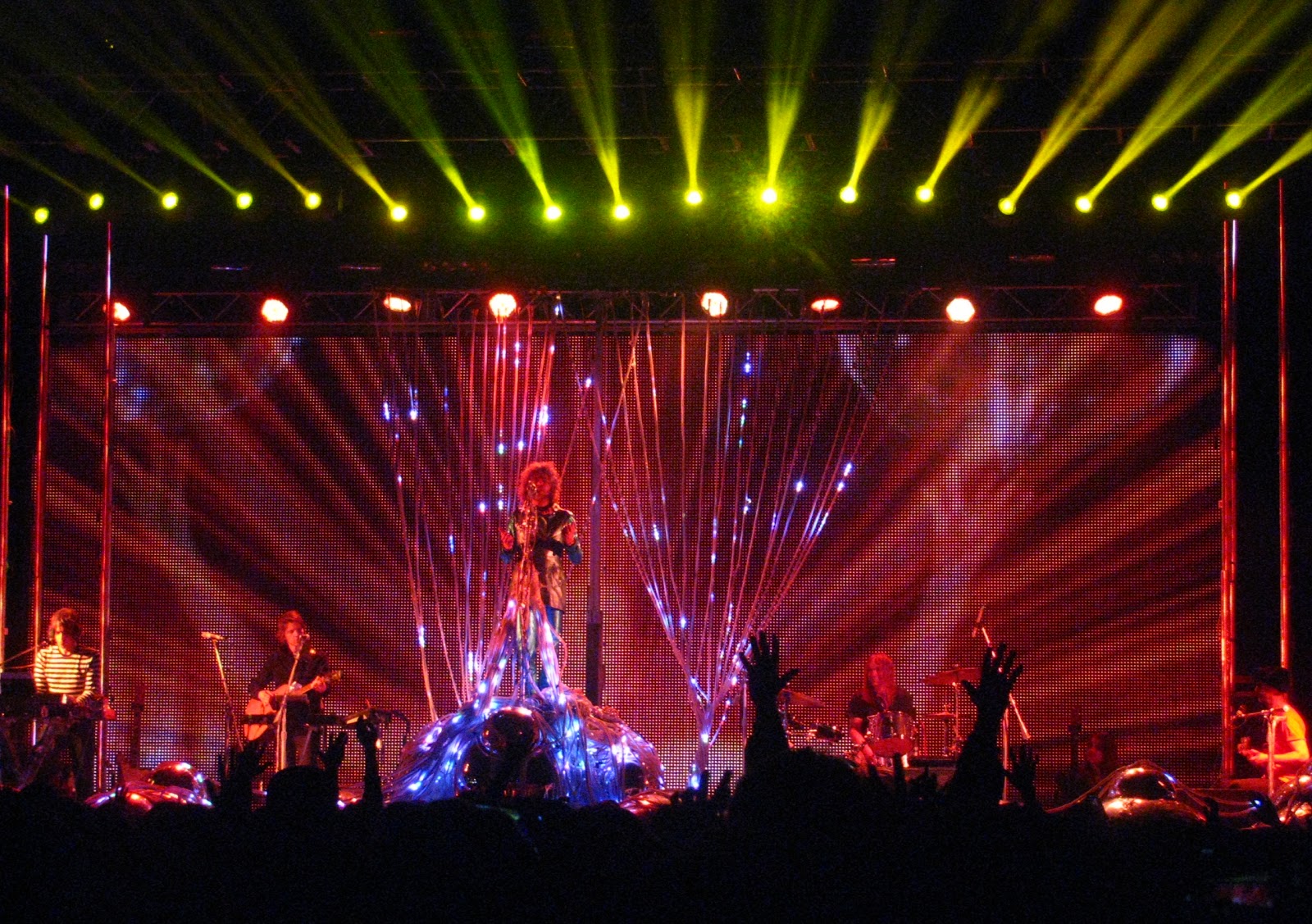 I even got to see the Black Crowes play "Hard to Handle," and Smashing Pumpkins encore with "Today" to finish off the best day of the three.  Despite all the mud, I'm highly considering a trip back in 2014.