Last night, I went to my third Spin Doctors concert in three years.  When I told my coworkers where I was going, they asked, "For real?"  "Yeah, it's an album release show," I replied.  "They have a new album?"  Yes, folks, Spin Doctors have finally delivered on their word and unleashed a blues record, If the River Was Whiskey.  To celebrate their first album since 2005's Nice Talking to Me, the Doctors treated fans to an almost two-hour concert at Brooklyn Bowl.

The show was opened by James Maddock, who looks like Lt. Dan (but with legs) and sings like Joe Strummer.  With such a great voice, I expected less generic lyrics.  When he started singing about "wrapping his coat around you" in the already sticky sweet "Beautiful Now," I rolled my eyes a little. I was impressed, however, by bespectacled drummer Doug Yowell, and how he was able to create a whole kit's worth of noise with just a cajon, a cymbal, a snare with brushes, and some bells strapped to his ankle.  Maddock dedicated "Step Into the Water" to Willie Manning, the Mississippi Death Row inmate who was granted a stay yesterday, hours before his scheduled execution.  After Counting Crows' guitarist David Immerglück led the band to a crescendoing climax on mandolin, James laughed and said, "We are not fucking Mumford & Sons, so just get that out of your head."  Maddock was selling advance copies of his upcoming album, Another Life, but there was another new LP we were itching for. 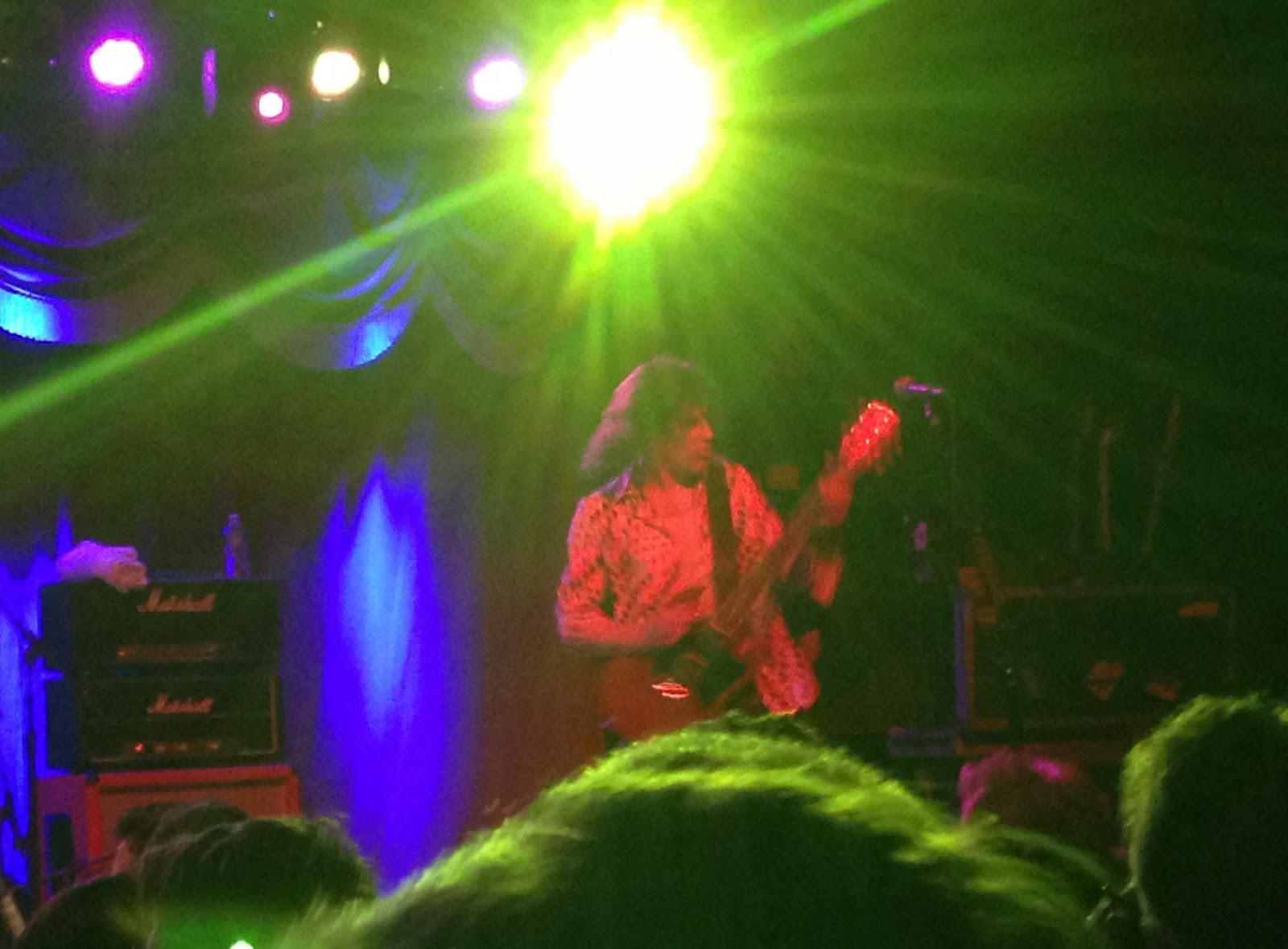 "This is a record release party.  This is not so much a concert as a party.  I hope you feel that way too," announced Chris Barron as Eric Schenkman strapped on his Flying V for "Scotch & Water Blues."  When he wasn't singing, Barron stood to the side intently watching Schenkman play.  The smile on his face revealed a musician genuinely impressed by his bandmate, a refreshing attitude in rock and roll.  When Barron felt the crowd wasn't cheering loudly enough for the solo, he yelled off-mic, "Come on, you motherfuckers! What the fuck?!"  Bassist Mark White was so tickled with his bandmates that he spent part of "About a Train" snapping their photos with his iPad.  It was great to see a band playing together so joyously after so many years.  "We're the original Spin Doctors," informed Chris.  "If you have any doubts to the veracity of that statement, I ask you who else could do this?"  Three quick hits from Aaron Comess, and Schenkman revved up the famous riff to "Little Miss Can't Be Wrong."  The crowd devoured it, proving Barron correct.

But even if most of the audience was there to hear their favorites from Pocket Full of Kryptonite, the Spin Doctors weren't there for that reason.  They were pushing If the River Was Whiskey, playing nine of the album's ten songs, and shooting the music video for the title track.  The record is currently number one on iTunes blues album charts, leaving Chris glowing, "We're fucking relevant."  Spin Doctors have always incorporated several styles into their songs, so the Whiskey tunes fit into the set swimmingly, ranging from the funky "Traction Blues" to barroom stompers like "Some Other Man Instead" to that archetypal, slow song about the devil, "So Bad."

However, it was the blues of one Jimmy Olsen that really ignited the fans.  The call-and-response section was easily the loudest I've ever heard a crowd sing at Brooklyn Bowl.  That is, until the band played a damn near perfect "Two Princes" that had everyone belting, "Just go ahead now!"  There's typically some sort of exodus after "Two Princes" (Why you would leave right after they bring the house down is beyond me.), but those who departed missed some of the night's best moments, including an extended jam in "Lady Kerosene" and an 18-minute encore that ended with rarity "Yo Baby."  Unfortunately, some people will only ever remember Spin Doctors as the band who did "Two Princes."  I know them as a band that always puts on a solid live show.

What Time is It? > Nice Talking to Me / Traction Blues / More Than She Knows / Scotch & Water Blues / Little Miss Can't Be Wrong / Some Other Man Instead / If the River Was Whiskey / Charge (tease) / Yo Mama's a Pajama > About a Train / The Drop / Sweetest Portion / Jimmy Olsen's Blues / Refrigerator Car > Genuine / Two Princes > Lady Kerosene