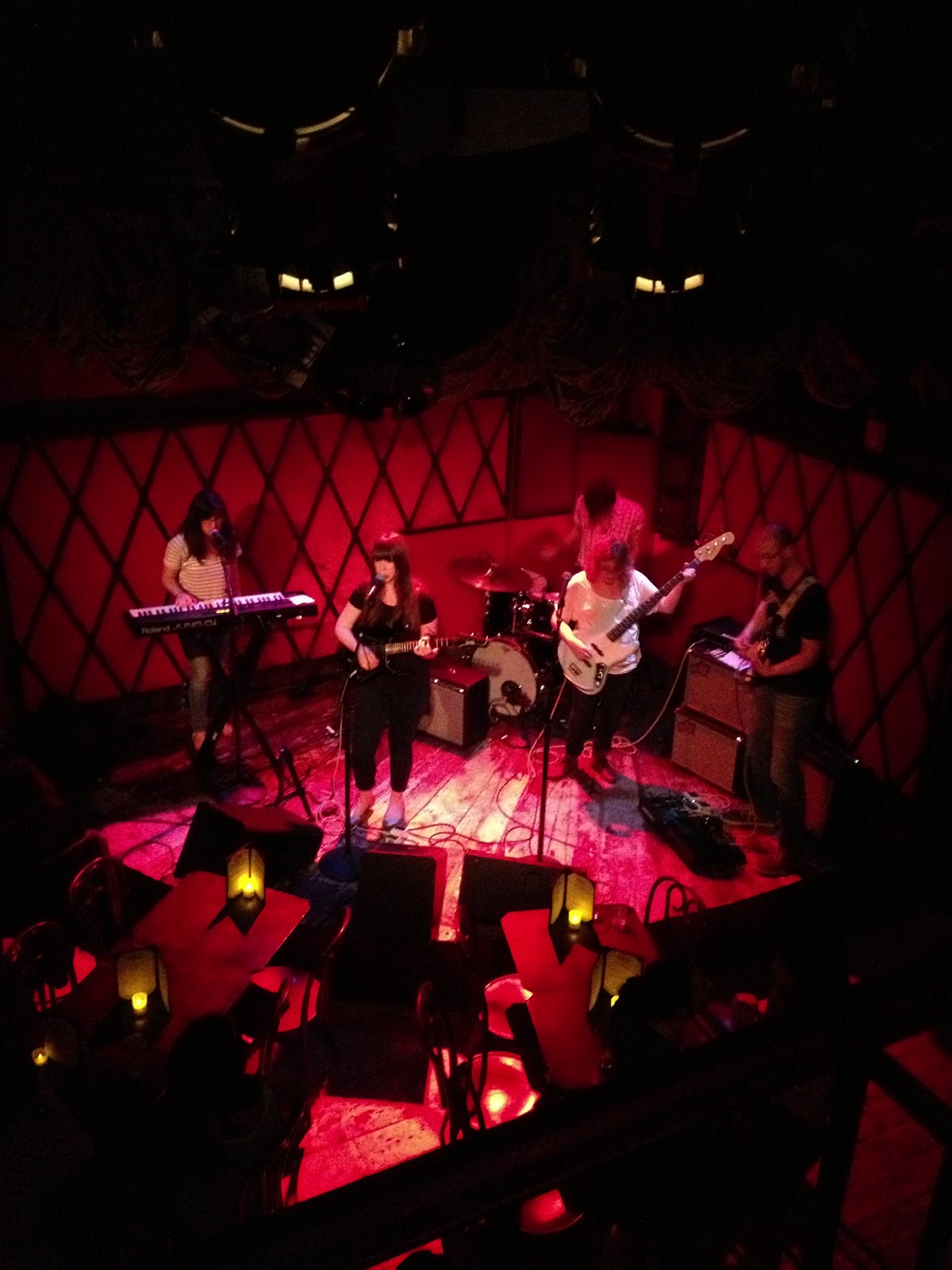 I discovered Hey Anna back in March at Muchmore's in Williamsburg, and I said I'd be keeping them on my radar.  Well, they played a gig at Rockwood Music Hall last night, so I decided to head on down.  Hey Anna is fronted by the three Rauch-Sasseen sisters (Erin, Katie, and the band's namesake, Anna), and rounded out by Andrew Smolin on guitar and Matthew Langner on drums.  They recently released their second EP, Pompette, which you can download for free at their Bandcamp.  "Or for some money if you're feeling generous," said Erin.  "$3000?" offered Katie optimistically.  "You never know," replied Erin hopefully.  They played all four songs from the EP, starting the set with the sweet love song "Superglue."  Erin reminded me of a mid-1990s songstress on this one, but make no mistake, they are not a revival band.  Smolin's staccato stringwork is the superglue that holds Hey Anna together, and sets them firmly into today's indie pop scene.  On the EP's best song, "Pia," Erin matched him on the verses with her jerky vocals as Anna tried her best to contact aliens with her keyboard.  Unfortunately, the room was quite talkative for the first half of the set until Anna and Erin harmonized a cappella on "Rollercoaster," which silenced the chatterboxes.

More stage time should allow them to command a crowd better, but they're so new that right now they seem to mostly just be playing the songs as they would when jamming in the studio.  Smolin was the exception, looking up from his guitar to clap and sing along (He doesn't have a mic.).  I suggest starting a set with Katie's spunky "Love Love Baby," which got the crowd dancing and the band smiling.  The shift was noticeable, with Smolin and Langner laughingly displaying their wingspans as they pretended to coast like birds at the beginning of "Cloud Bird."  When the band announced they had one more song, there was a collective "aww" from the audience (Awwdience?), followed promptly by a request for "Blackout" from their self-titled EP.  Erin retuned her guitar and they honored it, Smolin leading the crowd on the shout of "Woo!" towards the song's end.  If you were disappointed by Vampire Weekend's new album this week, give Hey Anna a try.  It could be the best $3000 you ever spend.