Last night, Fun played a free show for fans at Music Hall of Williamsburg. While the setlist was an abridged version of their recent run at Terminal 5, the small venue experience enhanced some of the performances. 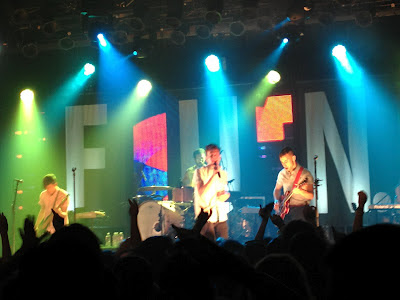 My friend got into a 300-person line two hours before the 9pm door time. I had to catch a $25 cab (so much for free), but was able to join up at 9, the line obviously swollen since 7:00. Slowly inching around the block, inhaling secondhand smoke, and being rained on, it was quite the nerve-racking experience. Would it all be for naught?

Right before 10pm, security cut the line off about 20 people behind us. Success! We showed our IDs and made our way into the only available spot at the rear. Before we could even get our bearings, the house lights went down, and screams gave way to the opening notes of "One Foot." "I'm standing in Brooklyn, just waiting for something to happen," sang Nate Ruess, quenching the desires of a crowd who had done just that in line. "We've only been off tour for like three days. It feels so much better to be back," he admitted.

The set was so similar, it didn't feel very different from T5, aside from the awful squealing of lyrics by the girl behind me and the presence of camera cranes and dollies for a broadcast of the show on Walmart's website in July. The déjà vu remained until Ruess took a break to remove his shoes, and informed the crowd that Nelly's "Ride Wit Me" had just popped into his head. Andrew and Jack found the chords and led the crowd in a sing-along of the chorus. The fun moment was followed by a reflective "The Gambler," in which Nate had to stifle the handclaps of an eager crowdmember. "You're not gonna find the beat, my friend. I dictate the beat."

When the drumbeat to "We Are Young" kicked in, the show elevated to new heights. The acoustics of the room combined with the choral singing of the crowd really made this a special moment, seeing the hit single of the hottest new band performed in such an intimate setting. No one could remember the smoke-choked line we waited in in the rain; only that we were young and we were going to set the world on fire. Perfect.

As the band slipped into "You Can't Always Get What You Want," the Terminal 5 surprise seemed less unique... until they trumped it with this version, all in the face of incessant talking from the girl behind me, too young to know the Stones. The band left the stage, and the audience began chanting, "One more song!" which thankfully later morphed into "Encore!" Why only ask for one more song? Why not eight? Fun listened to the first chant and went with "Some Nights." The "oh-oh-oh-oh-ohs" bounced off the walls amazingly, and Jack took the opportunity for a shimmering guitar solo.

The sonic hat trick at the end of the concert had me giddy at actually being able to get into the show. I wish I could've seen them when I started listening in 2009 before they got huge, but I never had the chance. I just realized that next year they will likely follow in the footsteps of many artists who've been around for years and yet are still nominated for a Best New Artist Grammy. And I'm fine with that, as long as they win, and as long as you know I was listening to them way before you.