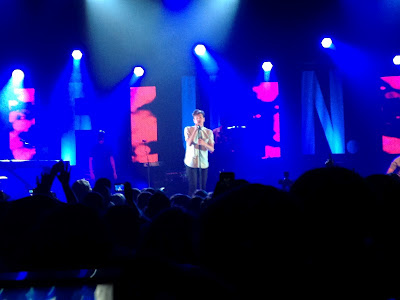 Fun (I refuse to put periods where they impede upon sentence structure, so deal with the lack of stylized punctuation.) started off their run of two sold-out nights at Terminal 5 tonight. Who would've thought that only a year ago when I saw them open for Panic! at the Disco (Yet I had no problem putting an exclamation point there?), and they began their set with "We Are Young," that it would become the spring hit of 2012? 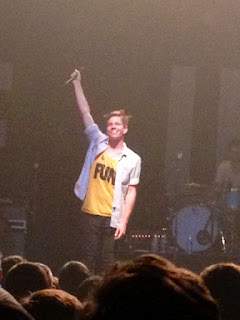 Well, it did, and that meant thousands of fans packed like sardines, singing along to songs from both Some Nights and Aim & Ignite. The sound was actually very good for Terminal 5, allowing me to fully appreciate Jack Antonoff's bright guitar-playing. As you'd expect from Fun, the show was bursting with energy and rarely set aside much time for banter (aside from one notable discussion of how New York is now their hometown, even though Nate still has an Arizona license. "He looked like Steve Buscemi before we all got to know him as a great guy. You know, the first time you saw him, he stressed you out a little bit," said Jack.). The show also featured the lengthiest eruptions of confetti I've ever seen, causing whiteout conditions, as evidenced in the photo below. 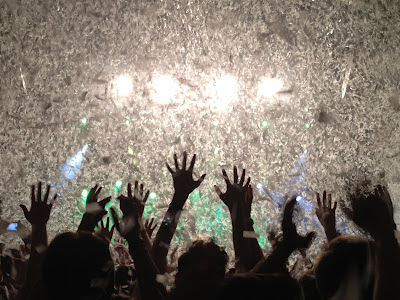 The surprise of the evening was not ending the set with "We Are Young," but launching into a cover of "You Can't Always Get What You Want." While I've heard better versions, it was nice to see them defy expectations. Also kind of shocking was the limited use of auto-tuning (I only noticed it during "Some Nights.") so liberally employed on the new record. Highlights for me were "All Alone" and the first encore tune, "One Foot." I hope they play the same exact set tomorrow, so I don't have to feel any shame in trading my tickets for tonight's show.