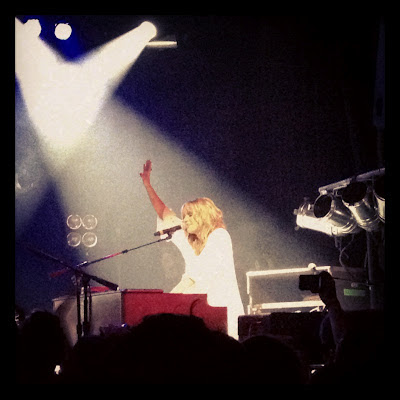 Move aside, Emily Haines. A new favorite frontperson is in town.
Grace Potter and the Nocturnals rocked Irving Plaza last night as part of Rolling Stone's Private Concert Series. I'd seen Grace Potter maybe five years ago, when she was pretty much just known on the jam band circuit. I remember enjoying that show, but last night I was fairly blown away.
At 9:37, the band took the stage to the tribal drums of the title track off their newest album, The Lion the Beast the Beat. Having released the LP on Tuesday, the set was heaped with fresh tunes, and Grace wasn't ashamed of it. "If you don't know it, just fucking pretend you do." The album sounds different than anything they've ever done before. I've always thought of Grace and the Nocturnals as a band that you could drop into the late '60s/early '70s and they'd fit right in. Their eponymous 2010 album delved into mid-to-late '70s-era pop/rock, and The Lion leaps forward into the '80s. With its angular guitar lines and drum machines, tracks like "Never Go Home" sound more like Tom Tom Club than Janis Joplin. How would this sonic departure fit into their live show? 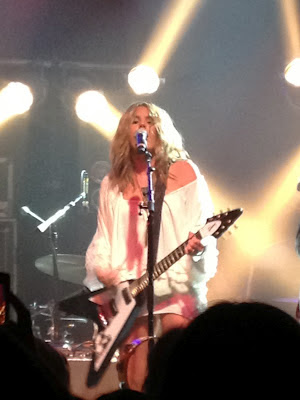 Surprisingly well. While the band tended to have more fun with the older material (The end of "Oasis" featured a jam with some killer Allman Brothers-style guitar interplay.), they were quite confident with the new tunes. By the time they hit "Timekeeper" halfway through the set, they were all smiles.
And so was I. Grace Potter looked amazing in her post-Memorial Day shirt/dress thing with matching Daisy Dukes. She danced the whole show all over the stage. (I don't think she ever learned to just walk anywhere.) You could actually watch her feeling the beat as it convulsed through her body and out her mouth off the tongue that seemed to so frequently emerge. When she belted out a song, she didn't just sing with power; she channeled her love of music into her vocals, and it's awesome. On ballads like "Stars," you could see her dealing with the same pain she felt when she penned the song. Trying to quell my recent vinyl addiction is going to be damn near impossible after seeing her seductively twirl her microphone stand while singing, "I will be your record, and you will be my turntable." She ended the set with "Medicine," and I immediately felt withdrawal symptoms.
They didn't last long, however, as the band reappeared for an encore of Jefferson Airplane's "White Rabbit," both parts of "Nothing But the Water," and a rousing Rolling Stones' cover "Happy." Hell, it was Rolling Stone's event. "There are a lot of parties in New York, but there aren't a lot of good parties," said Miss Potter. This was one of the good ones.