I did a double-header last Sunday: Alabama Shakes at Rumsey Playfield, followed by Penguin Prison at Brooklyn Bowl. I'm probably going to upset a number of you when I say Alabama Shakes are really good, but not great, live. If you want to just believe all the hype and quit reading now, I understand. You're a hipster. But if you're a real music fan, I encourage you to read on.
Doors for the 3pm show were at 1:45, and I was actually freaking out during my commute, believing that I wasn't going to get in because I was going to arrive around 2:15. Thankfully, there was no line, and I made my way to a choice spot in the center. The standing room tightened with each minute and by the time Houston-based Robert Ellis walked onstage, the venue was about 500 humans short of capacity. Those who made it early were exposed to his take on outlaw country, from barnstormers like "No Fun" to introspective ballads like "Photographs," the title track off his latest release (which I would've bought if the vinyl wasn't fucking $25. Come on.). Having played to eight people, one of which was his wife, the previous night in West Virginia, Ellis and his band lapped up the energy from the mass of people, and injected it back into the highlight of the set, a cover of the bluegrass tune, "Ruby, Are You Mad?"
After a short break, the nine to eleven members of Diamond Rugs, who I was almost more excited to see than Alabama Shakes, piled onto the stage. After about a minute of incoherent chatter, they oozed into "Hightail," the first song off their eponymous album. John McCauley of Deer Tick fame grabbed the mic for second song, "Gimme a Beer," with joyous trombone and baritone sax parts punctuating the chorus. Hardy Morris of Dead Confederate took the reigns for "Big God" and traded the microphone back to McCauley for what is sure to become one of my favorite songs this year, "Call Girl Blues." It was at this point I realized they were playing their album in order, and they kept this formula for their set. It worked well, though, because no one member sang lead vocals for more than two songs in a row. "Totally Lonely" was exponentially better live than recorded, with all the members joining producer Justin Collins on the final refrain. For the set-closing "Christmas in a Chinese Restaurant," which I had seen Deer Tick perform before, the group thinned its ranks to a duo of McCauley and Los Lobos' Steve Berlin. The fact that it was merely days after the summer solstice only amplified the beautiful sadness of the song. 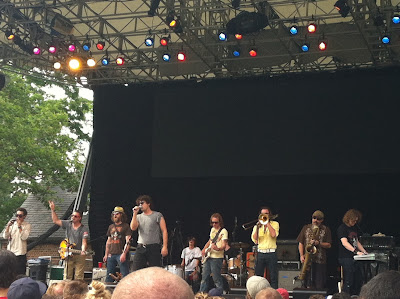 The most glorified band of the year, Alabama Shakes, were up next, packing Summerstage to its limits. Thankfully they chose to forgo the rigidity of their album, quietly welcoming the crowd with "Goin' to the Party," which I had predicted would be the only placement for the song in a live setting (It kind of kills the momentum of the album, but it probably wouldn't work as an album lead-off track either.). Exploding into "Hang Loose" and "Hold On," the Shakes had the crowd eating it up, but I wasn't totally sold.
Here's the deal. Frontwoman Brittany Howard is a sight to behold. Her powerful voice, accentuated by the pronounced shapes of her mouth while she's howling out her lyrics, makes her the prime candidate to lead a band. Unfortunately, the rest of the members don't live up to her. Don't get me wrong; the Shakes are all great musicians and they do sound better live than on record. But they made me realize how important stage presence is. Save for a few smiles from guitarist Heath Fogg, you couldn't 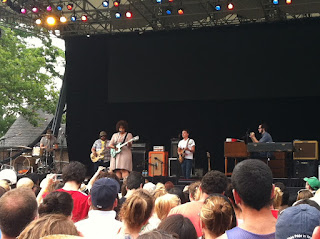 tell if the band members were actually enjoying it, or even if they knew they were playing to a crowd. Perhaps this concentration is what keeps them on top of things musically, but I like a little showmanship with my rock 'n' roll. When Brittany set aside her seafoam green Gibson and took the mic from its stand for "Be Mine," things improved. Stuck behind her stand for the previous numbers, she barely moved, aside from her aforementioned mouth and her curls billowing in the summer breeze. When she traversed the stage, you could follow her with her eyes, distracting you from the statues making the bluesy funk behind her. I hope that with more and more stage time, the young band will develop a little more sizzle in the future, or at least acknowledge that they are playing to 5000 adoring fans.
I hightailed it home so I could eat dinner and a half a brownie before heading over to Brooklyn Bowl for the next show. It started an hour later than advertised, so I made it in time to see two shitty support acts. Before Penguin Prison's set, I situated myself about three people back in the center. Chris Glover and band geared up and took us on a trip on the "Golden Train," with Glover climbing off the stage and into the crowd, pacing through us as he sang. It's not uncommon for artists to bring the show onto the floor, but I don't think I've ever seen it happen during the first song. I think it represents Chris Glover's newfound confidence by using the Penguin Prison moniker. He has always seemed a little socially awkward introducing songs, though it usually came off as funny, almost Hedbergian. Now that he has reincarnated himself as a new disco/remix artist with a ridiculous name, he seems more comfortable in that he's playing a game, not baring his soul. Hell, even when he performed as Chris Glover, he made sure to put it in quotation marks ("Chris Glover"). "Golden Train" segued nicely into "The Worse It Gets," as did "Animal Animal" into "A Funny Thing." He finished the set with "Blue Jeans," a remix/cover of a Lana Del Rey song, which you can download here. As I could give two shits about Lana Del Rey, it was a little disappointing. For the encore, he broke out "Multi-Millionaire," this time entering the crowd with his guitar. My main criticism would be the meager 47-minute set duration. Chris Glover has several unreleased songs from the period of his career directly preceding Penguin Prison that I find to be his best work. A well-placed "Hold My Soul" or "Tear Stains" would not be too much of a departure from his new sound, and would undoubtedly prove his versatility. I can't really complain. I had a great time dancing and singing along, and isn't that what it's all about?