I saw Donavon Frankenreiter for the third time last night. It's always been a good show, from watching his original amazingly talented percussionist stageside at Bowery Ballroom, to being genuinely shocked at seeing him perform "Lovely Day" last year at the Bowl. And these moments will be the memories that remain with me for as long as I will see Mr. Frankenreiter perform. Sadly, last night's show was so obfuscated by crowd noise that it will likely be the noise itself that I remember.
Rayland Baxter was the first to compete with the disrespectful audience. The complete lack of enthusiasm from the concertgoers (even though they still filled the front of the room) meant I was the lone person clapping when he asked how we were. He thanked me into the microphone. Buzzing from the amp on the first song did not help the matter, but Rayland had the sound tech fix the issue before he continued. Awkward stage banter ensued: "My middle name's Alan. I'm a fuckin' Libra." He reminded me of early Matt Costa with more of a country bent, germinated from his lifelong residency in Nashville. Despite the din of the majority, there were some of us paying attention to Baxter's folksy ditties, so he continued to push on, playing a 53-minute opening set. His debut album drops in late August on ATO, so be sure to click through to his website, provide your email address, and get a free download of the instantly likable "Driveway Melody." Or watch a heart-wrenching rendition of his song "Olivia" below:
Donavon and crew took their places a little before 10pm. I immediately noticed a difference in his appearance/attitude than past times. Sporting a shorter haircut (though still shaggy), a red button-down, and white pants, he seemed a little more mature than a professional surfer; more like a surfer dad. The set started with "Free," this version taking its cues from Hawaii à la Revisited, with Matt Grundy supplying the ukulele. After "Glow," he premiered "You" off of his new album, Start Livin', free to anyone in attendance. As is lamentably the case with new songs at concerts, the audience took the chance to start talkin'. So Donavon roped everyone back in with "What'cha Know About." It was at this time that I looked around and identified this as the most populated show I've seen at Brooklyn Bowl. And that almost everyone was talking. 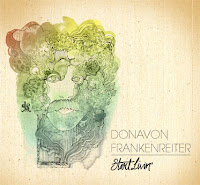 Donavon makes wonderful "barbecue music." You can put it on at a cookout, and no one will stop eating or speaking to perk up their ears, but they will enjoy it when they catch themselves listening when whoever they're talking to goes to the bathroom, or during a lengthy chew on an overcooked piece of steak. Unfortunately, if you go to a Donavon concert, expect a lot of people to have never left the backyard. I can't even tell you how many reunions I overheard instead of lyrics to new Donavon songs. Even old Donavon songs. One gaggle of cunts was especially annoying until they thankfully migrated closer to the stage. And why do people ever take pictures together in the crowd at a show? Not even with the stage in the background! "And here's us in a group of strangers." When Donavon asked for requests, he was met with "American Girl!" He obliged, and improved it since last year, but why not shout one of his songs? I wish there was some sort of required concert-going etiquette course that everyone has to pass before they can fill out the captcha on Ticketmaster.
In spite of all this bullshit, the show was still good. Most of the set drew from his first album, which is no surprise from Donavon, but he sprinkled some newbies in, including "Shine" and "Start Livin'," with its chirpy organ. Donavon said the show was surreal because he was watching his family bowl the whole time, and was unsuccessful in his attempts to get his son Hendrix to drum on "Call Me Papa." The band had some fun with "Lovely Day," but the real highlight was the final three-song funkfest of "The Way It Is," "Move by Yourself," and a chunky "Byron Jam." Donavon came out solo for the encore, saying, "I'll play anything you wanna hear." I don't know if anyone actually requested it, but he chose "On My Mind." The band rejoined him for "It Don't Matter," which devolved into a karaoke contest, with crowd members literally taking turns coming onstage to sing the chorus into the mic. I would've preferred another song or two instead of that nonsense, but it was the perfect conclusion for the crowd full of assholes.

On My Mind / It Don’t Matter