I was in no rush to get to Randall's Island today, only really caring to see Matisyahu and Snoop on today's schedule.  I arrived at 3:45 when the Dirty Heads were taking the Jeep Stage, and City & Colour were playing to one row of people on the main stage.  The Dirty Heads did their best Sublime impression, but I'm pretty tired of bands emulating Sublime (including Sublime with Rome). 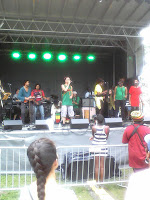 I headed over to the reggae stage, and discovered a somewhat unlikely amalgam of people and instruments onstage.  United by what I suppose is a love of marijuana, the 16 members of the Cannabis Cup Band made some irie music, complete with female vocal harmonies, live horns, and even a violin!  It was disheartening to see the huge crowd across the way for the fake-ass reggae of the Dirty Heads.  MC Rocker T joined CCB for a preview of their later set: a cover of "Bend Down Low."

It started drizzling and I made the walk over to the main stage for Cold War Kids.  I basically just like "Hang Me Up to Dry," so I figured I'd stay until they played it (likely last) and then go over to Matisyahu.  As I took my place in the mud from the previous day, a stench invaded my nostrils that I couldn't place.  Was it the mud?  The people around me?  Some skunk weed?  I decided it was the mud and was inescapable.  To my surprise, Cold War Kids played "Hang Me Up to Dry" about halfway through their set.  I couldn't really get into many of the other songs, but I noticed that the bass player kept kicking the singer on purpose.  Tension in the band or some strange bit of stageplay?  He didn't kick the Johnny Knoxville-looking guitarist at all.  Weird. 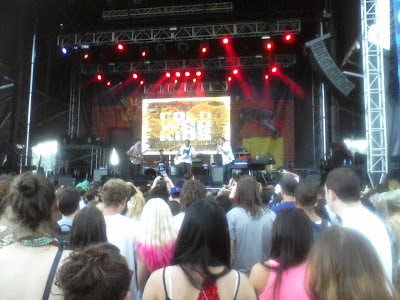 The sun burst through the clouds in tandem with Matisyahu's intro music, which sounded like the theme to a demented sports movie.  Originally possessing a long beard and Payot, it was somewhat of a novelty to witness a Hasidic Jew performing reggae music.  Having shaved off his facial hair in December, the new Matisyahu, looking more like a toned-down Ali G in his jean jacket, shades, and cap, walked onstage and sat down on a speaker cabinet while his band played.  No one really cheered because it seemed no one knew it was him.  The anticlimactic opening was only furthered when he began performing his latest material, which came across as poppy hip-hop.  It was the old Matisyahu we wanted, and we didn't get it until after some stellar beatboxing, when he settled into "Jerusalem," teasing Matthew Wilder's "Break My Stride" in the middle. 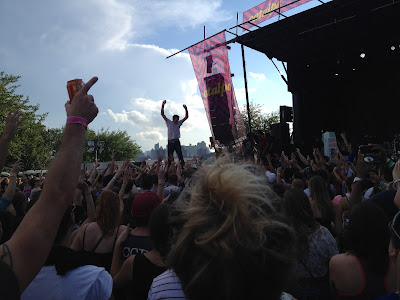 A beach ball was thrown onstage and he promptly confiscated it, handing it off to a roadie.  "I find these beach balls to be mad fucking distracting, you know?  I always hated getting hit on the back of the head with a beach ball when I was trying to watch a concert.  We're not at a fucking beach."  A little foul-mouthed, but accurate.  In response to requests: "We're gonna play 'One Day' and 'King Without a Crown.' Like we wouldn't play them.  Those are the only two songs everybody knows.  Patience, children."  Now wearing only a wifebeater, Matisyahu resembled a tall Jimmy Fallon.  He delivered on his promise, standing on top of the crowd in "King," and plucking people from the front one by one to join him onstage for "One Day." 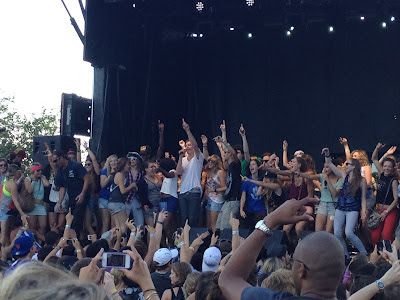 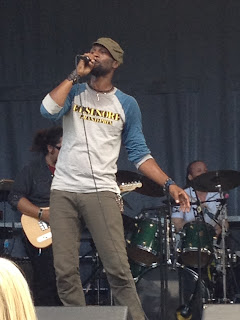 I had no desire to see Matt & Kim, so we returned to the dependable reggae stage for one of the biggest surprises of the night.  Leon & the Peoples were playing their "reggae-soul" music, which is essentially lovers rock.  I overheard a man in the crowd say something about Leon being a model and then it hit me where I'd seen him before.  Leon was the lead actor in Cool Runnings.  That was almost 20 years ago and he looks almost exactly the same, so we IMDb-ed.  He's fucking 50 years old!  Crazy.  He was also Black Jesus in Madonna's "Like a Prayer" video.  We took in the positive vibes of the group as they put their spin on "African" and "Lovely Day."  They have an electronic saxophone player, and now I totally want an EWI.

The moment I was dreading, choosing between the noise of Araab Musik and the mashups of Girl Talk, had finally come.  I chose dinner.  The grilled Vermont cheddar/bacon marmalade/avocado sandwich from Little Muenster was good, but some fresh cracked pepper would've taken it to a whole new level.  Crumbs was desperately trying to unload their cupcakes, so we took advantage of their 2 for $3 deal and ate them as the Cannabis Cup Band with Rocker T closed out the reggae stage with "Get Up, Stand Up."

We attempted to ride the Jeep Power Amp thing, but registration was closed.  With nothing else to do, we decided on A$AP Rocky, the Harlem rapper du jour.  But which one was he?  Two songs in, there were twenty hypemen on the stage, but none of them appeared to be the leader.  They just chanted "A-SAP! A-SAP! A-MOTHERFUCKIN'-SAP!" and yelled "Pussy!" as air horns and gun sound effects went off.  On the third song, a white-jumpsuited member took the forefront, but the same "A-SAP! A-SAP!" shit continued.  A post-song real-talk: "I'll tell you how life go.  I could be anywhere in the world right now, but I'm right here." "That's real nigga shit right there!" exclaimed one of his cronies.  Fool, you could've walked here.  As we walked away, I heard, "We were wearing skinny jeans back in 2004 and everyone thought we were fuckin' gay, and we had to fight every day, and now you embrace our skinny jeans."  New rule: Don't listen to anyone with a dollar-sign in their name.  Here's lookin' at you, Ke$ha.

With the stage decorated like the album's cover, it was finally time to hear Doggystyle performed in its entirety.  A projection screen shifted from the brick backdrop to Snoop Dogg smoking weed in a bathtub, setting up the interludes as scenes from a blaxploitation film.  It was a clever way to accomplish this, but technical errors resulting in the reveal of the DVD's menu sort of killed the flow.  One filmed bit even negatively affected the show:  After claiming that he should "never trust a bitch," Snoop wakes up to a woman pointing a pistol with a silencer at his face.  He quickly grabs his gat and shoots her in the head, digital blood spraying out.  Cut to an overhead shot of the woman's corpse on the bed with Snoop at its edge with his face in his palms.  The music to "Murder Was the Case" chimed in at this laughable moment, undercutting the seriousness of the song.  Compare this with the ominous production from the 1994 VMAs:


A DJ played a recording of a live band performing the songs, which begs to ask why a live band wasn't used.  The sound was what you'd expect from being inside a trunk-rattling system.  If it sounds like I was disappointed, it's mainly because they omitted "Lodi Dodi."  Maybe it was lost in the mix, as the album wasn't performed in order, but it made no sense as to why Snoop left it out, but he included a medley of his verses from Dre's "The Next Episode," "Deep Cover," and "Nuthin' But a G Thang."  I am dumbfounded that I was the only one who seemed to notice. 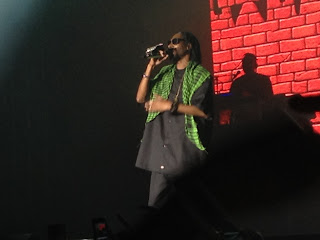 It was great to see Snoop back with all his original gangstas: the afro-puffed Lady of Rage, the lispy RBX, and Tha Dogg Pound's Daz and Kurupt.  Although Nate Dogg was sadly missed on "Ain't No Fun," we did get the mascot-headed Nasty Dogg, who occasionally waved his 4' dick from side to side.  But the thing that shocked me most was the realization that the album is almost 20 years old.  While Dre's G-Funk production is no longer used in hip-hop, the songs remain incredibly fresh onstage.  When I recognized that we will tell our children about this album the way older people tell us about Led Zeppelin, my mind was blown.  I also don't know the right age to expose a child to such graphic subject matter, but for me, it was 9.

"Drop It Like It's Hot" and a singalong "Young, Wild, & Free" made up the encore.  Snoop gave praise to Haile Selassie I at the end of the show, which makes me wonder just how seriously he's taking this Snoop Lion thing. 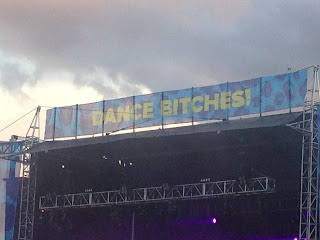 If they decide to do another Catalpa next year, here are my suggestions:
1. Better bands.
2. More trashcans.
3. Water in the hand-washing stations.
4. Move the soundboard further from the stage.
5. Print the reggae schedule.
6. Change the name.  No one knows how to say it or what it's supposed to mean.

SET –
Bathtub / G Funk Intro / Gin & Juice / W Balls / Tha Shiznit / Domino Intro / The Next Episode / Deep Cover / Nuthin’ But a “G” Thang / Serial Killa / Never Trust a Bitch Interlude / Murder Was the Case (Death After Visualizing Eternity) / For All My Niggaz & Bitches / Ain’t No Fun (If the Homies Can’t Have None) / U Betta Recognize / Gz Up, Hoes Down / Pump Pump / U Betta Ask Somebody / Gz & Hustlas / Chronic Relief Intro / Doggy Dogg World / Stranded on Death Row / Who Am I (What’s My Name)?