"It's like being shot with an arrow of Katy Perryness," replied a young fan when asked what she thought of the show she attended on Katy Perry's California Dreams Tour.  Katy Perry's new documentary/concert film Katy Perry: Part of Me attempts to recreate this arrow for moviegoers, and while it does look fun, it's missing some magic. 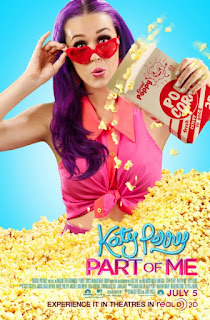 I have to disclose some things before I continue.
1) I do listen to Katy Perry; not that often, but I've listened to every song on Teenage Dream at least 3 times.
2) I went to see this film mainly to see Katy's boobs in 3D.

Part of Me is a document of the behind-the-scenes dealings of Katy Perry's 2011 California Dreams Tour with 3D concert clips interspersed.  It also chronicles Katy's rise to fame from her Pentecostal upbringing to her first hit to her record-breaking five #1 singles from one album by a female.  It follows the same structure of Justin Bieber's Never Say Never, even down to the fan YouTube testimonials (Katy's fans albeit slightly older and way gayer).

The obvious difference between Perry's and Biebs' flicks is the conflict: Justin has a sore throat; Katy has a failing marriage with Russell Brand.  We get to witness a few of their interactions and put together our own conclusions as to why the fairytale ended.  Katy's rigorous yearlong tour schedule only made time for the occasional 3-day break, which she spent flying around the world to meet Russell.  Russell sends her a picture message of a McDonald's in LA with an address matching their anniversary, claiming they should name their firstborn Ronald.  "Babies can't have babies, and I'm still a baby," Perry admits in a confessional.  Sadly, the documentary crew has a horrible time keeping their shots in focus, and it looks very unprofessional.

The majority of the 3D concert footage, on the other hand, is a colorful treat for the eyes... and ears.  Katy sings all her songs live, and I respect her greatly for that.  The frequent costume changes (about 7 in "Hot N Cold" alone), mimes on wires, and giant purple Kitty Purry mascot add to the spectacle, but even though it's 3D, you never really feel like you're there; just wishing that you were.  It's a little like watching a tape of a Broadway show.

Unfortunately, for most of the movie, these two worlds rarely feel like part of the same film.  When they do come together, however, the film succeeds.  (SPOILER ALERT/BEST PART OF MOVIE ALERT)  At the movie's climax, Katy Perry's marriage has fallen apart and she's weeping backstage in her dressing room.  Her manager informs her, "You have two options.  You can cancel the show, or you can go out there and do your best."  As Katy Perry waits below a trap door, pinwheels spinning on her breasts, she is crying.  She composes herself and puts on a wide smile, which quickly fades to a shaky frown.  As the platform begins to rise to stage level, she reapplies the smile, this time with a little less teeth.  It's a moment that documentary filmmakers live for, and thankfully they got it in focus.

NOTE TO PERVS:
There is some nice boobage in the movie, though with the majority of 3D movies now preferring recessed dimension over outward projection, the most you're gonna get in your face is a microphone stand.
at 5:18 PM