I bought the early bird weekend pass to Catalpa Festival the day it went on sale because the announced lineup was the Black Keys, Snoop Dogg, TV on the Radio, and Umphrey's McGee.  More acts were to be added, so they had to be quality bands, right?  Wrong.  Imagine my disappointment when the schedule was finalized and these are still pretty much the only performers I wanted to see (and that 3 of them are on the same day, 2 of them at the same time).

I sucked it up and went to Catalpa today on Randall's Island.   It was five years ago to the day that I saw Rage Against the Machine headline Rock the Bells on the same field.  That day was insanely hot and sunny, while overcast skies and light rain greeted me today as I exited the 103rd St 6 station.  I met my friend, Maritza (who took all the photos) and we trekked across the footbridge to the island. 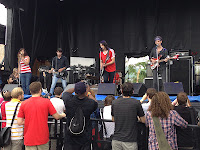 The first band I wanted to see were the Demos.  The Rochester group caught my ear with their poppy "Nervous" when I was YouTubing the openers to decide what time to arrive.  They introduced "Nervous" as "a song about fuckin'," and while it reminded me a little of the Postelles, the rest of their tunes reeked too much of the Strokes.  I guess we know what band they are the demos of. 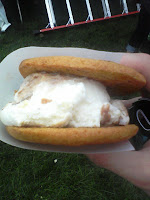 I bought a chicken and waffles-flavored ice cream sandwich from Coolhaus, but it didn't taste like chicken or waffles, so I won't be visiting their truck any more.  Thankfully it was served in an edible wrapper because trashcans were few and far between.

The hidden gem of Catalpa is the High Times Reggae Stage, where I'll likely be spending most of my day tomorrow.  The reggae bands aren't even listed on the schedule (Bullshit in my opinion, especially considering the schedule for something called Arcadia is listed, but it's not on the map.), so I figured they would be a bunch of dancehall acts with synthesized beats, and God forbid, maybe even some reggaeton.  I was dead wrong.  There was a good band with live horns finishing up as we arrived around 3, and we also caught the last two numbers from the singalong-worthy Marcia Davis & Outro. 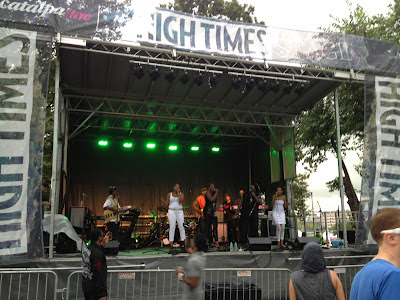 What about the rain?  It was torrential for about twenty minutes or so.  Thankfully, we had just picked up our headphones for the Silent Disco and took refuge dancing in the tent with a DJ who deftly mixed the Beastie Boys' "Intergalactic" with "Need You Tonight" by INXS.

Canada's the Sheepdogs were next on the docket.  They opened their set with "Who," which I had YouTubed yesterday, only to learn that the song is a little too similar to another Canuck's, "Down at the Khyber" by Joel Plaskett.  Judge for yourself below. 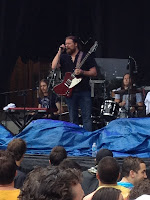 Cribbing their look and sound from the Allman Brothers, it seems the Sheepdogs don't mind a little thievery in their music, introducing another ditty as "an old song adapted from an Aretha Franklin song."  They weren't bad.  In fact, if I lived in Saskatoon, I'd be pretty proud to have them as my local bar band.  But they shouldn't be on the cover of Rolling Stone.

We got cheeseburgers and sat on the hill while Hercules & Love Affair played.  "You guys wanna hear disco or house?" shouted DJ Whitney Fierce.  Neither!  Get off the fucking stage if you're not gonna play any instruments. 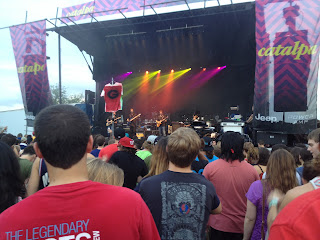 Umphrey's McGee played two sets.  They took the stage about 15 minutes late, which was annoying because I wanted to see all of TV on the Radio, which meant less Umphrey's.  That turned out to be just right.  I've read interviews where they have said they hate being called a jam band and insist on being classified as progressive rock.  Which would be fine if they progressed a little faster.  It took them about 8 measures too long to start exploring once they locked into a groove.  It wasn't bad (like the Disco Biscuits), but I wasn't completely caught up in it, moreso in the crazy dancing of the guy in the Character Zero t-shirt, who would every so often touch the ground just to make sure he was still on Earth.  The second set seemed more fluid when I caught a whiff of it later, including a raging "Miami Virtue" from their most recent album.

TV on the Radio made me angry... that I hadn't seen them live before.  Coming out with the spacey "Young Liars," complete with wind chimes hanging from David Sitek's headstock and trombone blasts by Dave Smith (He played with Diamond Rugs at Central Park.), they commanded the main stage with an intensity not yet seen during the day.  "Dancing Choose" may have been performed a little too aggressively, Tunde Adebimpe's vocals barely discernible in his punk rock fury, as he waved his giant hands around. Tunde dedicated "Second Song" to Adam Yauch, professing, "I would not be in New York City without the works of that man." "Will Do" proved itself as an instant classic, and "Repetition" flowed nicely into "Wolf Like Me," the crowd-pleasing last song. 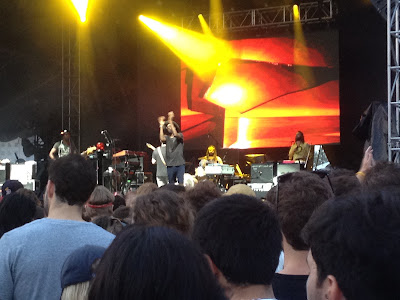 It seems you can't have a festival in 2012 without the Black Keys.  I'd been waiting to see them for awhile, so Catalpa seemed the perfect opportunity.  Turns out that if you've seen them at one festival this summer, you've seen them at every one.  They played the exact setlist they did at Firefly last week, except they didn't allow for an encore break.  And it's weird when a band doesn't do an encore when they headline a festival.  Especially when they have ten minutes left before curfew.

Was the crowd to blame?  I think the initial dip in excitement came during "Gold on the Ceiling."  The best song on their latest release, it should be a surefire live hit.  But Patrick Carney just couldn't keep the tempo for some reason.  The song faltered, and the audience had a hard time clapping along.  Carney regained his timekeeping for a string of older songs done as the original duo, but the young crowd didn't know the tunes.  When Dan Auerbach announced they had a couple more songs left, "so let's make 'em good ones," it was a plea for dancing, clapping, anything.  Appreciatively, the energy level did rise with his request.  "Lonely Boy" jump-started the crowd into dance mode, and Auerbach's timid falsetto in "Everlasting Light" shined.  A huge backdrop of "The Black Keys" written in lights rose behind them for "I Got Mine," and then it was over. 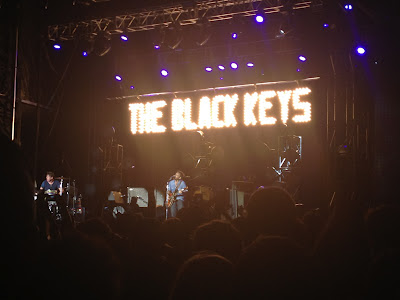 As we sloshed through the muddy field and onto the Robert F. Kennedy Bridge, I had flashbacks to Rock the Bells.  Although not perfect, it was a show I will never forget.  While I would've loved to see Rage when they were originally together, another Beastie Boy, Mike D., ruined that for me by breaking his collarbone.  Catalpa Day 1 will likely not  go down in anyone's history.  Well, maybe Hercules & Love Affair's.  Here's to hoping that tomorrow's live performance of one of my favorite albums will make up for today's downfalls.