Incidental Animals Play Their Second Show Ever at Brooklyn Bowl 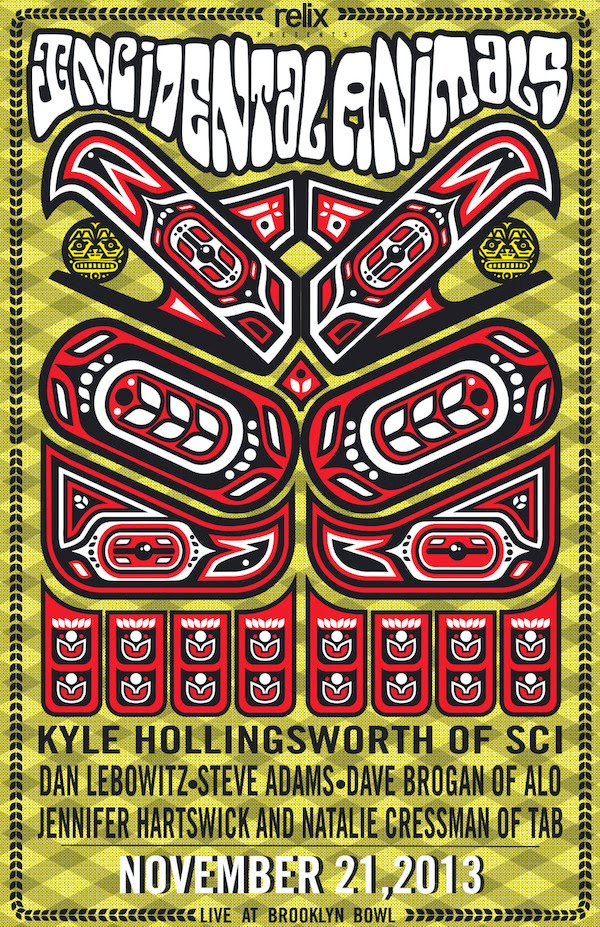 Weddings bring people together.  ALO were hired to play a wedding event in NYC, but with Zach Gill on tour with Jack Johnson, Kyle Hollingsworth of the String Cheese Incident was tapped to man the keys.  Then the group was filled out with the horn section of Jennifer Hartswick and Natalie Cressman, compliments of Trey Anastasio Band.  The group, known as Incidental Animals, decided to book a few gigs to practice, and performed their second show ever on Thursday at Brooklyn Bowl.

The concert was opened by a Fort Lauderdale 5-piece called the Heavy Pets.  The Pets began with "Xylophone," which reminded me of Phish's "Free."  And while the tune may have crossed the ten-minute mark, the jam never progressed into a different headspace.  "We've got a brand new song for you guys," Jeff Lloyd announced, turning the vocal duties over to keyboardist Jim Wuest.  Unfortunately, Wuest turned his vocal duties over to a vocoder, rendering the lyrics unintelligible.  Ditching the vocal effects, "Stay the Night" went smoother: real lite FM baby-makin' music.  But the band claimed it was their 900th performance, so I expected much more experimentation.  "Help Me Help You" did feature an unexpectedly funky breakdown, but that was quickly expunged by guitar noise.  The song received a helpful upgrade from guests Cressman and Hartswick, who took turns soloing.  That would've been the ideal place to end the set, but they continued with "Last Babies," a tune that did little more than suggest that Mike Garulli probably listens to a lot of Dispatch and Slightly Stoopid.

Incidental Animals kicked off their set with the SCI number, "Can't Wait Another Day."  Dan slathered something similar to "Barbeque" sauce onto the peppy island tune before taking it into a haunting, spacier world.  Once they emerged from the darkness, Jennifer brightened things up with her trumpet, stretching the song out to 13 minutes.  "We care about you.  That's why we take the time to tune," informed Dan, readying his guitar for the rarely played "I Wanna Feel It."  Hartswick took lead vocals on the most joyous "Piece of My Heart" I've ever heard.  Always a delight, "Try" was enhanced by the ladies, who played the I-Threes card, singing back the last word of each line of the chorus.

It was refreshing to witness the smiles across the stage as the musicians figured out how to gel, with Cressman and Hartswick arranging their horn parts on the fly.  The brass reinvigorated "Lady Loop," which was also intensified by Kyle's spooky Virus TI synthesizer.  Having never seen Hollingsworth before, it was interesting to watch him work, mouthing along to the notes from his keyboards.  I got quite the kick out of imagining that the sounds were actually coming from his mouth.  Following "Naïve Melody," they played a fun Dan ditty I've never heard before, which I'll call "I Thought You Were My Friend."  Steve Adams finally got a chance to sing on "Falling Dominoes," and the girls proved they were just as talented minus their mouthpieces, as they traded verses on "Higher Ground" to finish out the set.


A minute later, the Animals returned.  "We got the OK to go another five hours straight," joked Kyle.  Jennifer ushered in a chill take on "Walls of Jericho" with a jazzy intro.  Once the song reached its climax, the band segued into the Jacksons' "Shake Your Body (Down to the Ground)," the perfect choice to prep the dancefloor for Bowl Train.  Aside from getting married and hiring them yourself, the only way to see them is via the Relix stream recorded that evening.  So find that special someone, and do us all a favor.

After the show, Lebo and I went across the street to the Wythe Hotel's rooftop bar to tape an interview for The Next Round, so look for that in the upcoming weeks.