A Night at the Rockwood with Grey Reverend, Taurus, & Fancy Colors

I made the rounds at Rockwood Music Hall last night, visiting Stages 1, 2, and 3.  The first stop was Stage 3 for the sold-out Grey Reverend performance.  L.D. Brown a.k.a. Grey Reverend has quite the captivating backstory.  While making headway as a jazz guitar soloist, Brown began to notice problems with the dexterity in his hands.  He was diagnosed with a neurological disorder called focal dystonia that affects fine motor skills.  Rather than give up his instrument, Brown turned lemons into lemonade, and adjusted his playing to suit a minimalistic folk approach.  The combination of how he uses his fingers (including his thumb) on the neck and off-the-cuff interesting tuning results in his anomalous tone.  This unpredictability went both ways, from the stirring ring of the final chord in "Altruistic Holiday" to the muddled middle of "The Payoff."  "One by One" featured the most complex of the guitar parts, requiring both rhythm and lead.  At its end, Brown sighed, "That was exhausting."  The great unifier to the songs was Brown's haunting voice, which could somehow simultaneously sound meek and powerful.  The audience was dead silent for each number, entranced as they pondered the thoughts in his lyrics.  His dry, witty banter in between tunes made him all the more endearing.  "I'm gonna take things down just a little bit," he said.  "If you didn't think things could get any more down."  Before the final song, "Sunday Soldiers," a loud thump came from the rear of the room by the door.  "Is everyone alright back there?" L.D. questioned.  "Someone just passed out from the awesomeness," he added with a laugh.

I popped into Stage 1 for the first time in years to catch a little of Taurus, who are currently in the midst of a month-long Thursday night residency at the club.  Bassist Chris Morrissey was leading the band through a grooving new tune when I entered.  They followed it with a song from their first album, which had a more alt-rock Foo Fighters vibe.  The last number I caught was another unreleased one, but if I had to guess, I'd say it's still in the germination stage.  While the drums and bass proceeded like an upbeat jazz section, the guitars fought over whether they were playing country or psychedelic rock.  Throw Morrissey's pop vocals on top, and you had four genres in an all-out brawl.  That space has always been a little claustrophobic for me, so I made my way next door. 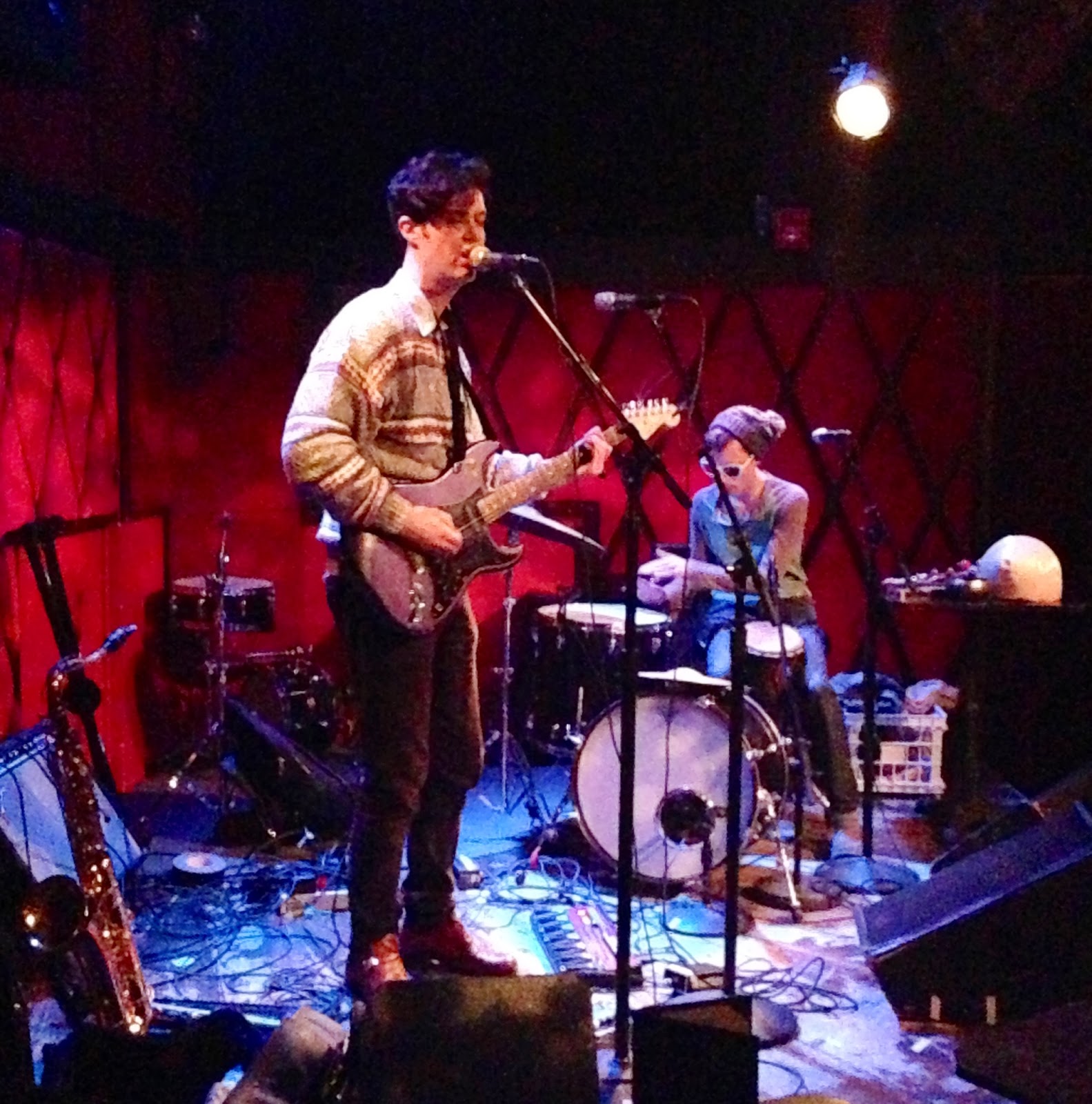 I've been a big fan of Jupiter One since 2009, and I learned at Kishi Bashi's Irving Plaza concert that the other members are now in a band called Fancy Colors.  When I walked into Stage 2, I saw Zac Colwell, but I was surprised to find Dave Heilman absent.  In his place was Adam Wall, wearing sunglasses with one lens missing.  "Tonight, me and Adam are presenting the songs like this," informed Colwell.  "We're experimenting."  And experiment they did.  The first song began with Zac playing a flute and a saxophone, some fairly unusual instruments for a rock band, but then Adam trumped the weirdness by blowing into a large conch shell.  They followed with "The Way You Walk Away," a more conventional tune with a choppy riff and super-smooth hook.  "The Last One" was an extended cut, ranging from gentle plucking to abrasive Flaming Lips-esque drones, before it culminated in a sax solo that charmed a wine-swilling patron into an interpretive dancer.  She grabbed a partner for "Driftin' on a Cloud," within which Colwell removed his saxophone's neck and used it as its own instrument.  At five songs, it was a brief set, but it capped off a night of truly intriguing music.