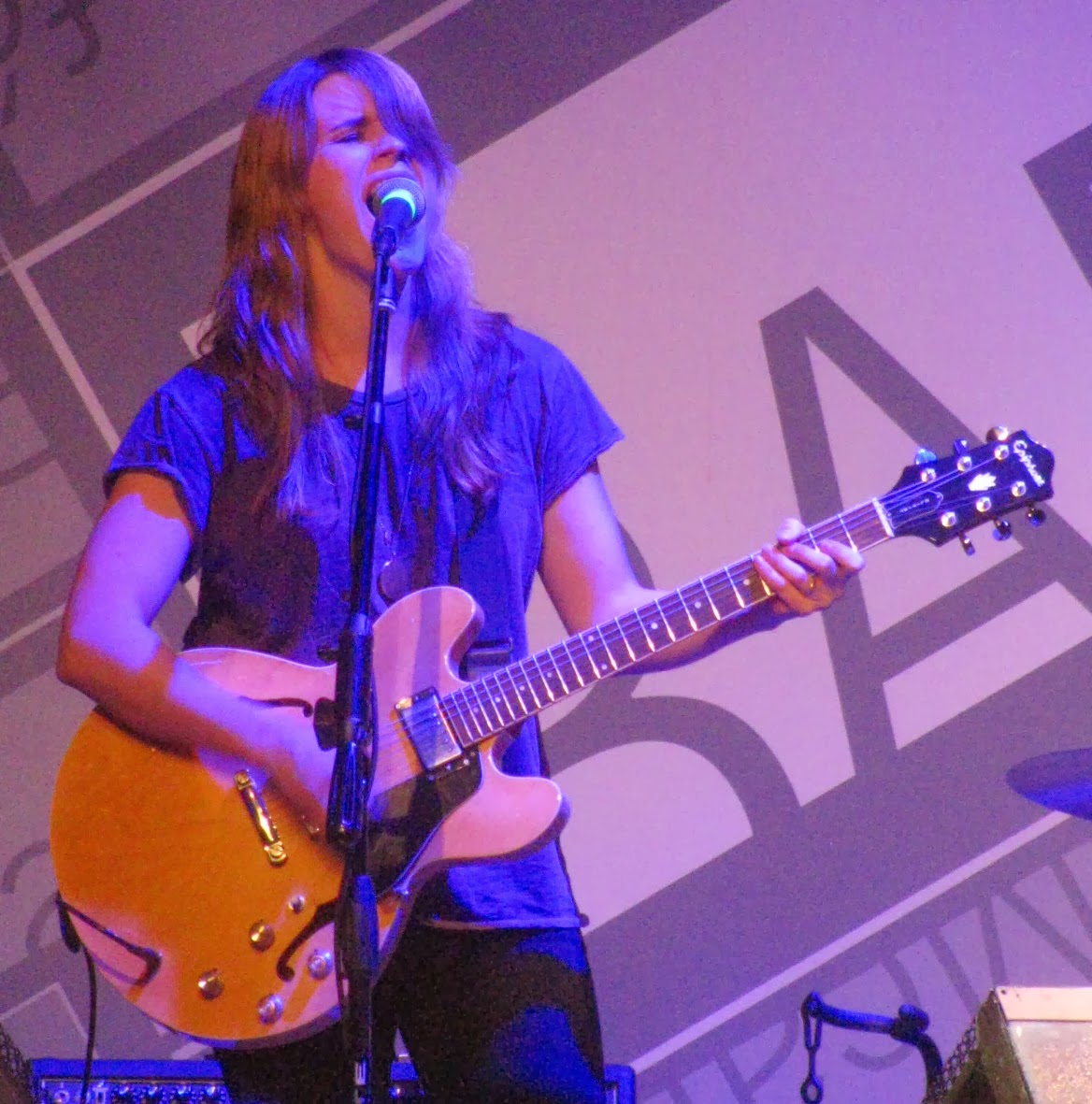 Jenny Owen Youngs played a free show on Friday as part of the BAM Café Live concert series.  The last time I was at BAM was for the Joy Formidable, and the staff had removed the chairs and tables to allow the crowd to get closer to the action (and the band to venture into the crowd).  But on Friday, this JOY was presented with the formidable challenge of uniting a room of seated patrons organized in the same configuration as at a comedy show I'd seen there.  While the ushers insisted on keeping a chasm of floor space between the seats and the stage, and the building's lofty ceilings served to amplify the chatter coming from the back bar, Youngs didn't let it affect her.

Assisted by her friendly demeanor, Jenny is so instantly likable because she puts so much passion into her vocals onstage.  She's capable of both shouting uninhibitedly like a punk or cooing sweetly, and she often does so within the same line.  Fronting a power trio that included bassist Mike Tuccillo and drummer Elliot Jacobson, she charged into the set with "Love for Long."  Following the sea shanty stylings of "Clean Break" and the poppy "Your Apartment," JOY threw everyone for a curveball when she revealed the next number would be "Colors of the Wind" from Disney's Pocahontas.  She requested that we accompany her: "If you blank on anything, you can just go 'bobcat, otter, rainstorm.'  You know, nature images."  From my seat in the back, I didn't really hear all the voices of the mountains, but Jenny and band successfully morphed the song to fit her sound, coming across like the version Pocahontas would've sung once England-bound on John Smith's ship.

A few fans who had seats in the front row began trickling into the space directly in front of the stage, but to be sure, Jenny still had to battle with the bar.  Unfortunately, the quiet "Why You Fall" fell victim to the rebounding conversations, but the audience was recaptured by Tuccillo's growling fuzz bass in a beefier take on "Led to the Sea."  Jenny took a moment to share the hilarious, rambling introductions of her bandmates, including referring to Mike as a "lover of dogs."  "I've been playing a lot of solo shows recently, so I haven't been introducing people," she admitted.  In fact, the last time I saw her perform was a solo opening spot at Webster Hall, where she played Johnny Cash's "Ring of Fire."  While this time it wasn't exactly the singalong that the crowd of anxious-to-sing-anything Frank Turner fans at Webster made it, Youngs utilized the band to manifest a pretty cool live fadeout.  After the cover, she dismissed the boys, but she didn't want to be alone.  "Are you guys feeling like participating?" Youngs polled the crowd.  She tutored us on the gentle chorus to "Firefight," and though muffled, I heard the refrain rising from the tables.  She invited Elliot and Mike back to close out the show with three of my favorites, "Great Big Plans," "Pirates," and "Last Person."  By the end of the hour-long set, the space in the front was packed with dancers of all ages.