Having rocked Madison Square Garden less than a week prior, Metric pleasantly surprised fans by announcing an intimate gig at the Bowery Ballroom, their first show at the venue since 2005.  Unfettered by both time and the pressure to gain Paramore fans, the band opened up the setlist, reaching back to revive seven Live It Out tracks.

With no support act, the band took the stage a little after 9pm to cheers from the crowd.  Emily Haines rubbed her hands together and placed them on her keyboard.  She began playing the first notes of "Nothing But Time," the slow-burner a far cry from the torrent of MSG's "Black Sheep."  It was obvious Haines was more relaxed, all the way down to her outfit.  Donning a thin black blouse under an unbuttoned tan military shirt, she wasn't relying on sparkles to catch your eyes, though she did sport some pot leaf bling on the sleeve.  After two more Synthetica tunes, Metric began their plunge into the past with the gentle "Ending Start."  "Why is the Bowery Ballroom still my favorite place to play?" Haines questioned.  "Empty" was a standout, Emily oscillating her head vigorously as the audience sang along.  Haines took some time to express her feelings on how the band was somehow left out of the indie music history book despite being in its Williamsburg epicenter in 2001.  It seemed like she was lamenting their exclusion, but clarified when asked what they would've done differently: "You know, fuckin' nothing, man."  More set highlights included a "Patriarch on a Vespa/Handshakes" mash-up, a Jimmy and Emily "Love is a Place", and a stellar performance of "Clone." 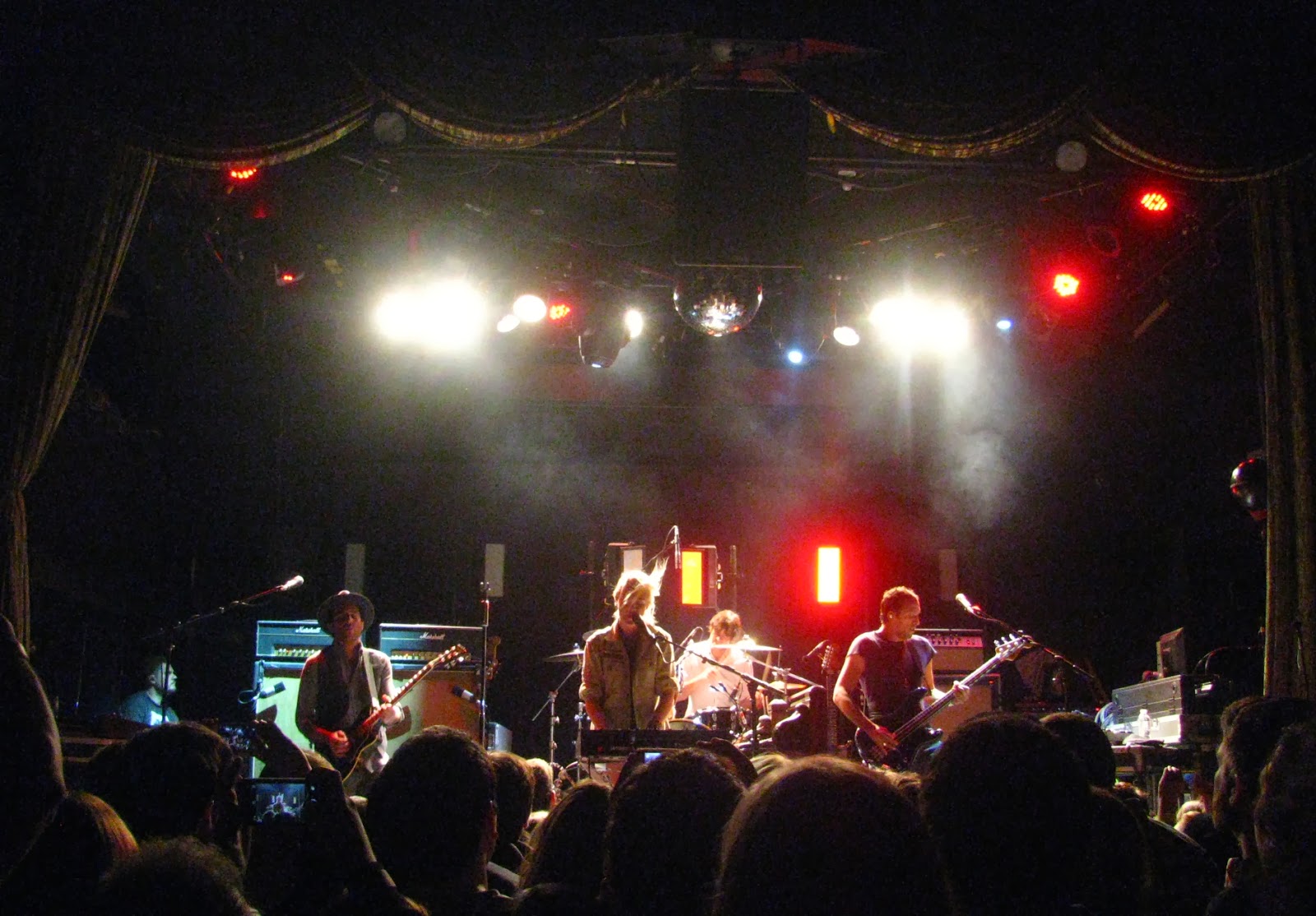 Jimmy and Emily returned to the stage for an encore, and Emily shared her optimism for the new mayor.  "This song is dedicated to the end of stop and frisk," she said, ready to begin "The Police & the Private."  As it turns out, fans aren't the only ones who get annoyed by iPads at concerts.  Catching sight of a tablet in the front row, Emily abruptly halted.  "Yo, yo, yo, I can't sing with that thing recording me.  It's gonna shirk me out.  I hate this shit, man," she said.  The iPad was confiscated with approval from the audience, and the duo proceeded.  Josh Winstead and Joules Scott-Key rejoined them for "Too Little Too Late," "Glass Ceiling," and an impressive "Gold Guns Girls" that saw Shaw, looking the part of Indiana Jones in his hat and vest, ripping into his solo to melt faces like he'd just lifted the lid off the Ark of the Covenant.  The rhythm section departed once more, and Haines announced, "We'll leave you with a lullaby.  Did you get everything you wanted from your Metric show?"  More cheers (aside from my roommate, who really wanted to hear "Black Sheep" again).  Shaw and Haines finished things with an acoustic "Gimme Sympathy," encouraging the crowd to accompany them.  Smiling, Emily looked around the room and remarked, "Well, I don't know what it is, but it's ours."  To which I would pose the question: How many of their turn-of-the-millennium Williamsburg compatriots are even together, let alone still making compelling music?

ENCORE -
The Police & the Private / Too Little Too Late / Glass Ceiling / Gold Guns Girls / Gimme Sympathy
at 12:50 AM