On Saturday, I saw They Might Be Giants for the fifth and final time of this year.


Opening the show was Miniature Tigers, who I've followed since their 2008 full-length, Tell It to the Volcano.  By the time I saw them at CMJ that fall, I was well-acquainted with their songs.  I consider it my favorite album that sounds like anyone could've made it, which is a testament to their knack for melody and unconventional lyrical topics.  However, as the years have progressed, the band has morphed into a sort of Pet Shop Boys tribute act.  Paired with acoustic guitar chords, Charlie Brand's reedy voice was endearing, but set against the polished synths of their current material, he just sounds like someone who can't sing.  Brand expressed his excitement for They Might Be Giants: "I hope they play 'Fingertips.'  That's my personal favorite."  Yeah, and I wish you'd play "Cannibal Queen."  With no need to strum a guitar anymore, Brand has been relegated to awkwardly walking around during the songs, or resorting to exhibitionism like grabbing bandmate Rick Schaier by the shoulders to kiss him on the lips at the end of "Gold Skull."  While the big sound of "Oblivious" and a line about Aladdin on VHS in "We Used to Be the Shit" were pleasing, nothing was as original or spirited as the tunes on their first album.  They played nothing from it. 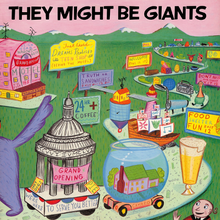 They Might Be Giants, however, performed their entire first LP.  "Released in 1986 to almost complete silence," according to John Flansburgh, their eponymous debut came to be affectionately referred to as The Pink Album, due to the pink background of the cover.  Listening to the vinyl in preparation for the concert, I realized just how influential a record it is.  It's difficult to imagine that the Elephant 6 Collective could've even existed had TMBG not paved the way in Pink.  Ever since the fantastic Celebrate Brooklyn gig, when They revealed that They would be playing the album in its entirety at Terminal 5, I was excited to finally see some of my favorites live.  And then came the announcement two weeks ago that it would be their last US tour date until 2015, taking things to a new level and causing me to put too much pressure on the show to be perfect.

TMBG took the stage as a different band in "The Mesopotamians," and quickly launched into the song that has traditionally opened their shows this year, "You're on Fire."  But fans like myself don't go to show after show just for the catchy songs; the witty banter between and sometimes even within those songs is what truly makes a TMBG show unique.  Flansburgh referred to "Tesla" as "almost all true.  This is like the Where's Waldo of songs.  I think if you listen to it, you can figure out the part that's not true."  After "When Will You Die," everything went dark.  Silence except for an answering machine recording of a woman named Gloria having a very hard time understanding what exactly They Might Be Giants means.  The infamous Dial-a-Song message primed the air nicely for the main event.  The two Johns, Flans on guitar and Linnell on accordion, returned to the stage, and began "I Hope That I Get Old Before I Die."  This meant two things: 1) They wouldn't be slaves the to the tracklisting, and more importantly, 2) Linnell would be playing a lot more accordion!  Their backup band returned for "She's an Angel," nicely countrified by some slide guitar from JF.  Two minutes into "Hide Away Folk Family," They commanded the crowd to "Scream as if you're in Hell," which was fun, but its best moment occurred when the Johns tried to approximate the rewound vocals at the end of the number.  If you were listening closely enough, you would've heard JL sneak in a "Meryl Streep."  "Boat of Car" followed, with Flans' vocals pogoing from Johnny Cash bass to Margaret Seiler mezzo-soprano.  As JF procured a harmonica for "32 Footsteps," we all learned that the instrument is symmetrical, so that you can accidentally play it upside-down.  This lead to a strange riff on adult-onset Alzheimer's, which Linnell tagged with "As soon as the show starts, we'll talk about it."  He finally put down his squeezebox and resumed his post at the keys for a rocking "Youth Culture Killed My Dog."  Before "Number Three," Flansburgh announced, "This is in the key of F."  "For those of you playing along," Linnell jested.  He switched to bass clarinet for "Hotel Detective," and then it was time for the tune I was looking forward to the most: "Rhythm Section Want Ad."  The first verse felt rushed, but everything was reconciled with an excellent "Powerhouse" section, Linnell banging on the keyboard as Dan Miller made his guitar sing like a Warner Bros assembly line.  It was my highlight of the night. 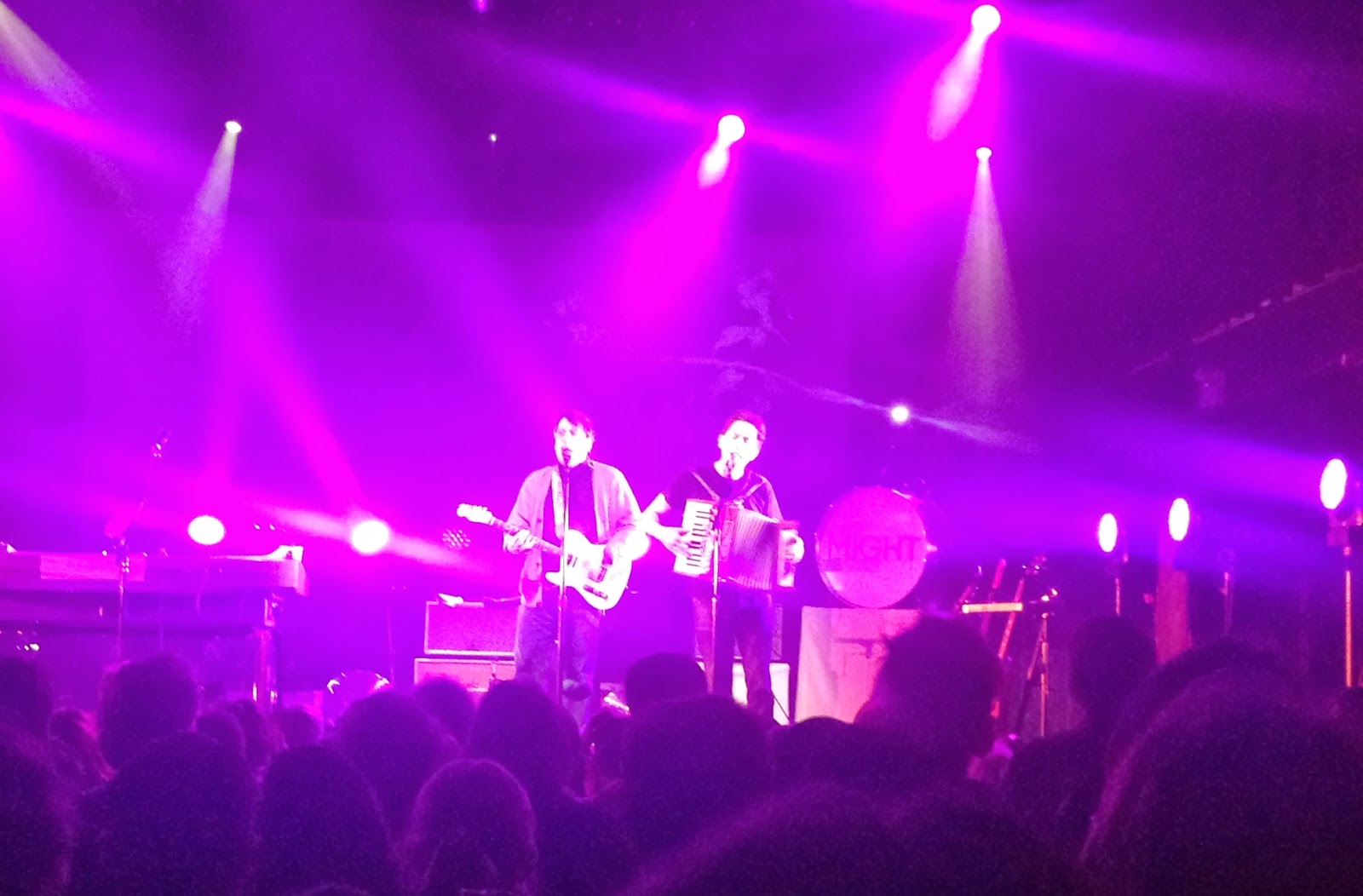 While the band teased Black Sabbath's "Paranoid," the Johns headed to stage left to stick their hands into the Avatars of They: two sock puppets that sing songs but are mainly known for their repartee.  "Toddler Hiway" was the selection they'd been given; in fact, the shortest song on the album.  "The first thing I thought was, 'The fuck?'" said the shafted Blue Avatar (JF).  The duo dropped their puppets for the bizarre "Chess Piece Face" and got the crowd singing on "Alienation's for the Rich," particularly the line about Miller High Life.  "Thank you!  We're gonna play a song from our first album," laughed Linnell.  They charged into "Nothing's Gonna Change My Clothes," segueing into "Absolutely Bill's Mood."  The record's biggest single and always-welcome setlist addition, "Don't Let's Start," completed the string of first record cuts.  After the obligatory "Damn Good Times," JL finally revealed his true feelings on the 11th president: "He was a dick." It was one of the more energetic takes on "James K. Polk" I've heard, and the potency carried over into the caffeinated version of "Black Ops."  "Doctor Worm" finished the set, although it lacked the punch of the horns, not to mention the fact that Dan Miller's mic wasn't on for half the song.

There was still one track remaining from Pink: "The Day."  Thankfully, the Johns came back to play it.  I'd noticed throughout the evening that the crowd had seemed divided, and this confirmed it.  Split down the middle by a too-tall guy near the front, the left side of the room waved their giant arms like trees, while those to the right stood idly by.  John and John then went to "Istanbul," their "take me back" interaction developing into a monk chant.  They wrapped up the encore with "Nanobots," Linnell facing the audience, while the band turned their backs to blend into the video projection.  After more applause, the members reclaimed their stage positions.  "We love this town.  We're thinking of staying," joked Linnell.  If there was ever a song to unite the segregated crowd, it was "Birdhouse in Your Soul," and it worked like a charm.  I was holding out for "The End of the Tour," but "Birdhouse" was an effective closer.  The band didn't reference their upcoming touring hiatus onstage at all.  I guess I would've rather not known about the 2014 no-show policy until after the concert.  I would've approached it differently; not as a farewell, but for what it was: a charming celebration of a great album.

ENCORE I -
The Day / Istanbul (Not Constantinople) / Nanobots