When the weather is perfect in New York, there are few things better than a Celebrate Brooklyn concert in Prospect Park.  Last night's show brought New Orleans to the borough, with sets from the Soul Rebels and Jon Cleary & the Absolute Monster Gentlemen.

Jon Cleary and his Gentlemen represented NOLA's cherished history of piano-based fonk, continuing a lineage of artists that includes Jelly Roll Morton, Professor Longhair, and James Booker.  Beginning with a medley of "Fools Game" and "Just Kissed My Baby," Cleary interjected, "Somebody needs to shake somethin'!" and swerved into "Loose Booty."  The sound was great, but a careless cameraman stood right in front of Jon, blocking him from view.  This was especially annoying because it wasn't apparent why they were actually shooting it, considering the bandshell doesn't use screens during their concerts.  As Jon sang, "I feel so damn good I'll be glad when I got the blues," no one was more the embodiment of that feeling than drummer Jeffrey "Jellybean" Alexander, who played the entire set with a huge grin.  Though Cleary took obvious pleasure in performing fan-favorites like "When You Get Back," he also made time for some new numbers, which included "Beg, Steal, or Borrow" and "Pump It Up."  The latter took on an island vibe with its chorus of copious congas from percussionist Danny Sadownick.  A low-flying helicopter sent a quick burst of excitement through the crowd during "Groove Me," and the funky ditty sustained that momentum, ejecting several asses from their chairs.  They remained standing for the Absolute Monster Gentlemen's anthem, "Mo Hippa," which featured some supremely fat synth flourishes from Cleary on his Nord keyboard.  I taped a podcast interview with Jon earlier in the day, so be on the lookout for that.

The Soul Rebels took the New Orleans tradition of the brass band and updated it for the 21st century.  After coaxing the crowd to their feet, they used "2013" to teach some simple choreography to the crowd, miming a lasso movement.  Following "Rebelosis," a screen descended behind the eight-piece, and it lit up with a live feed from the cameras.  (It was nice to see Celebrate Brooklyn stepping up their game, but why did they have the camera guys out there to block Cleary?)  The group proceeded with "Thank You," a Jay-Z medley found on their new mixtape, Power=Power (Download it for free.).  Finishing with "Hard Knock Life," the brass mash-up was a hit with the Brooklyn crowd.  For those too old to appreciate rap, the band embarked on a cover of "Billie Jean" with Marcus Hubbard's trumpet replacing MJ's vocals.  They segued into "I Can't Go for That (No Can Do)," this time with Erion Williams' saxophone playing the part of Daryl Hall.  A large portion of the crowd took a minute to relax during a drum solo from Derrick Moss and Lumar LeBlanc, but they rocketed upwards at the first notes of the Latin scorcher "Work It Out."  "504" allowed for some easy hand choreography, and then the Rebels educated the audience on the 2-1 handclap to set the pace for Pharrell's "Happy."  Cameras tracked across the barricade, capturing Park Slope matrons unabashedly shimmying to the mom-dance song of the millennium.  During closer "Get Up," Hubbard instructed the Brooklynites to get down as the band lessened its volume.  Singling out a few ladies that remained upright, Marcus scolded, "Y'all with the umbrellas need to get down.  I know you second line."  The raingear-wielding women obeyed.  He continued, "I want people on the other side of the park to say, 'Man, what's going on over there?' letting us know that we were supposed to go wild.  With everyone crouched and ready for liftoff, the band teased the classic "engine, engine number 9" line from "The Choice is Yours," and the crowd exploded with delight. 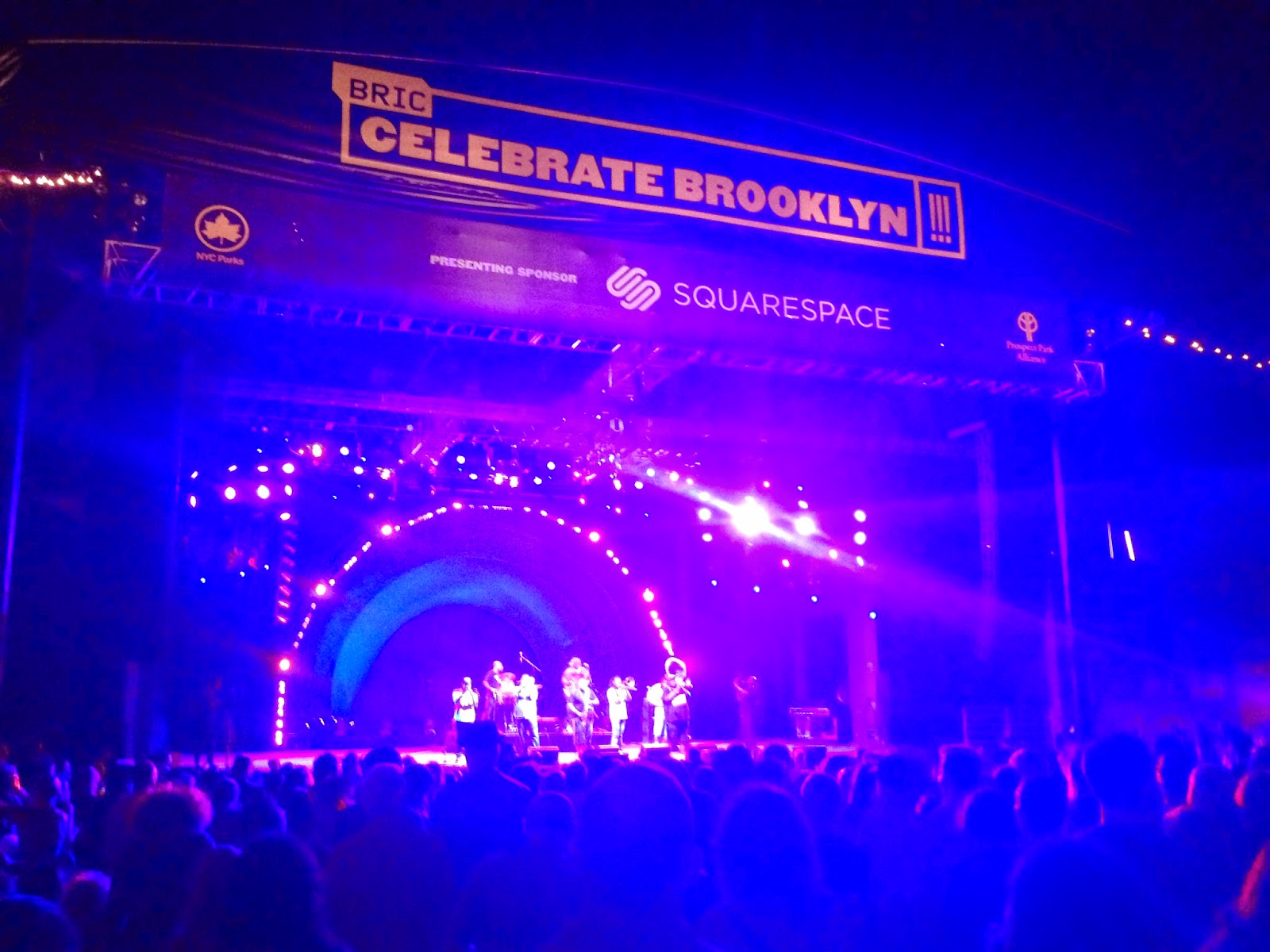 SET -
Fools Game > Just Kissed My Baby > Loose Booty* / So Damn Good / Unnecessarily Mercenary / Beg, Steal, or Borrow / Right Here in My Arms* / Sometimes I Wonder / When You Get Back / Pump It Up / Groove Me / Mo Hippa

*If anyone knows the titles of these songs, please let me know.
at 2:25 AM