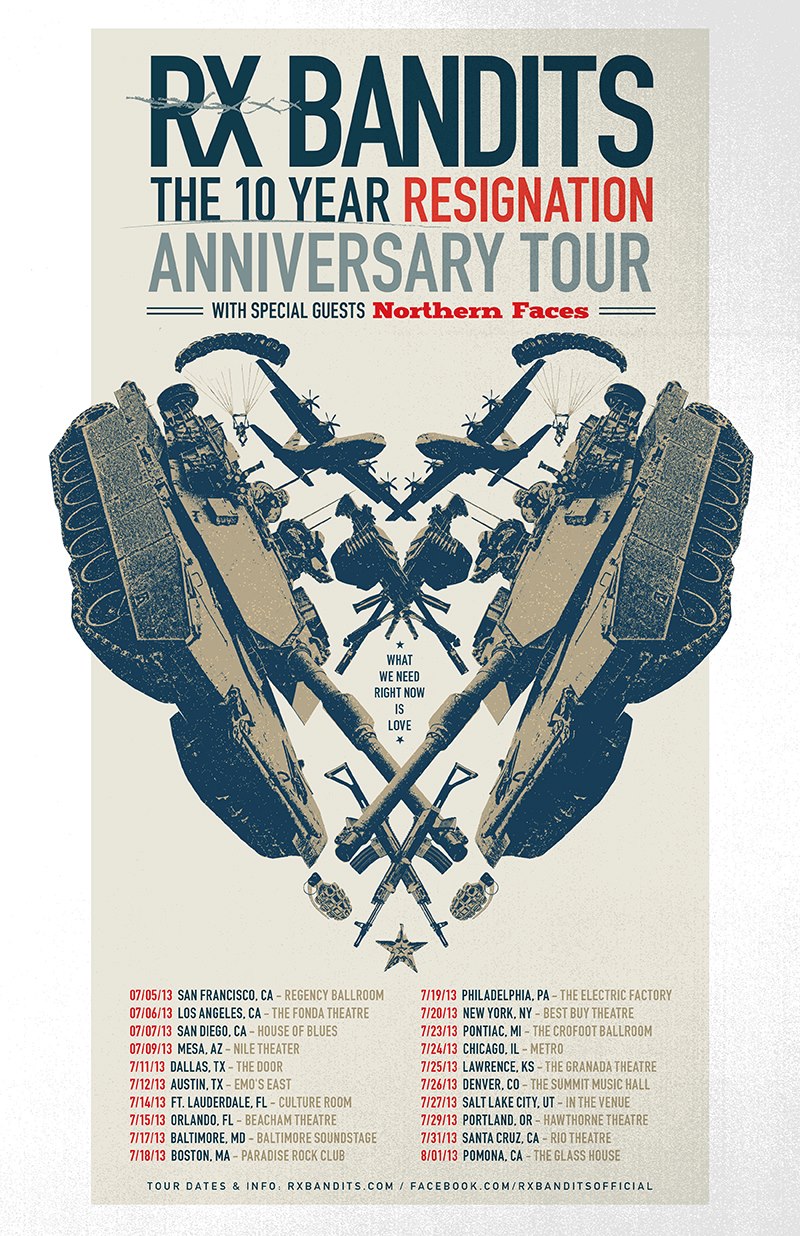 Two years ago, Rx Bandits went on an indefinite hiatus, and fans weren't sure when they would return, but we all had a sneaking suspicion they would.  The tenth anniversary of The Resignation, the album where they solidified their progressive sound, turned out to be enough of a catalyst to make them pack up the van and hit the road once more.  Last night, the tour stopped at New York's Best Buy Theater.

The opening act was Northern Faces, a band I wasn't expecting to enjoy based on the samples I'd heard of their debut EP, Southern Places.  However, in accordance with my maxim to see music performed live, I was pleasantly surprised by the quartet from Albany.  I still feel they have plenty of room to grow vocally, but their stage presence and musicianship were both beyond their years.  Bassist Matt Ippolito wiggled around the stage joyously as "Dark Days" packed its Crazy Horse punch.  Revving up new song "Strange Places," Marco Testa's guitar sounded like a helicopter taking off underwater.  Testa attempted to sing some lyrics off-mic, but the room not being as intimate as Mercury Lounge, or having the legendary acoustics of Carnegie Hall, his voice was completely swallowed up.  Before their final number, Bryan Shortell thanked the crowd, saying, "There's an energy in this city that just isn't anywhere else in the country."

Truer words were never spoken as the lights went down for Rx Bandits, the large screen behind the stage displaying The Resignation's cover art.  The boys dove right in with "Sell You Beautiful," generating a tsunami on the floor that was perpetuated by the spinning vortex of a moshpit on the left side of the room.  Not a casual fan in the crowd, everyone sang along at the top of their lungs, forging a blistering energy that only intensified with "Prophetic."  Chris Tsagakis rode the wave, accelerating the already-fast "Newsstand Rock" to a breakneck speed that actually got a little sloppy.  The opening chant of "Overcome (the Recapitulation)" gave everyone a chance to breathe (Well, maybe not the folks in the front, packed so tightly that security emptied water bottle after water bottle onto them in hopes of preventing any blackouts.) before it eventually found its way to its normal pace.  Slipping into the next tune, the horns caressed the groove of my favorite performance of the night, "Never Slept So Soundly," which reached its pinnacle as the crowd sang, "Together!"  After "Republic," Matt Embree took a moment to address the audience briefly: "We missed you guys. How ya doin'?"  He didn't wait for an answer though, as the band crunched into "Mastering the List."  There was a noticeable dip in the energy level around this point, a combination of both the predictability of the setlist and the fact that the songs on the album stretch out in this section.  "Mastering" wrapped up as it does on the record, with a spaced-out dub jam, this time visually accompanied by the opening dream sequence from 8½.  In a night that seemed slim on jamming, it was a welcome treat.  "Falling Down the Mountain" featured a Coltrane-esque sax solo that felt a little out of place thematically, but I appreciated the effort.  After "Dinna-Dawg," C-Gak played a drum solo that came to an abrupt end right before the stabbing beat of "Decrescendo" would've kicked in.  The audience had been waiting for it all night, and the delay made it that much sweeter.  The energy back on par with the set's beginning, the moshpit took over the entire center of the floor as Embree repeatedly sang, "Did you get what you wanted?"  I don't think there was a soul in the room who didn't.

As fans cheered for four minutes, a bizarre video was projected of man who had been shot in the stomach, crawling around and smearing his blood as he inched along a wall.  The images switched to the chest of a female exotic dancer, who removed her top, issuing an audible cheer of "Yeah!" from some in the encore-hungry audience.  So much for not objectifying women, Bandits.  The band returned, and Embree admitted, "It means so much to us that we were gone for so long, and you all came back."  The screen illuminated with the four-armed woman on the cover of ...And the Battle Begun as they eased into the title track.  Would they play all of that (superior) record too?  It actually seemed like they might when they transitioned into "In Her Drawer."  There were no complaints though, only a collective roar, when the Native American face from Progress appeared to ring in "Infection."  Midway through "Only for the Night" Embree stepped to the edge of the stage and said, "We could play all night for you.  We could play all night for you."  Though he didn't make good on that, he sang a few lines from "Bring It on Home to Me," which I'd seen him perform in full last year, before bringing "Only for the Night" on home to its rousing conclusion.  There isn't any word yet on if the Bandits are back for good, but I hope they don't make us wait three more years for the ...And the Battle Begun anniversary, even though that's a show I definitely wouldn't miss.