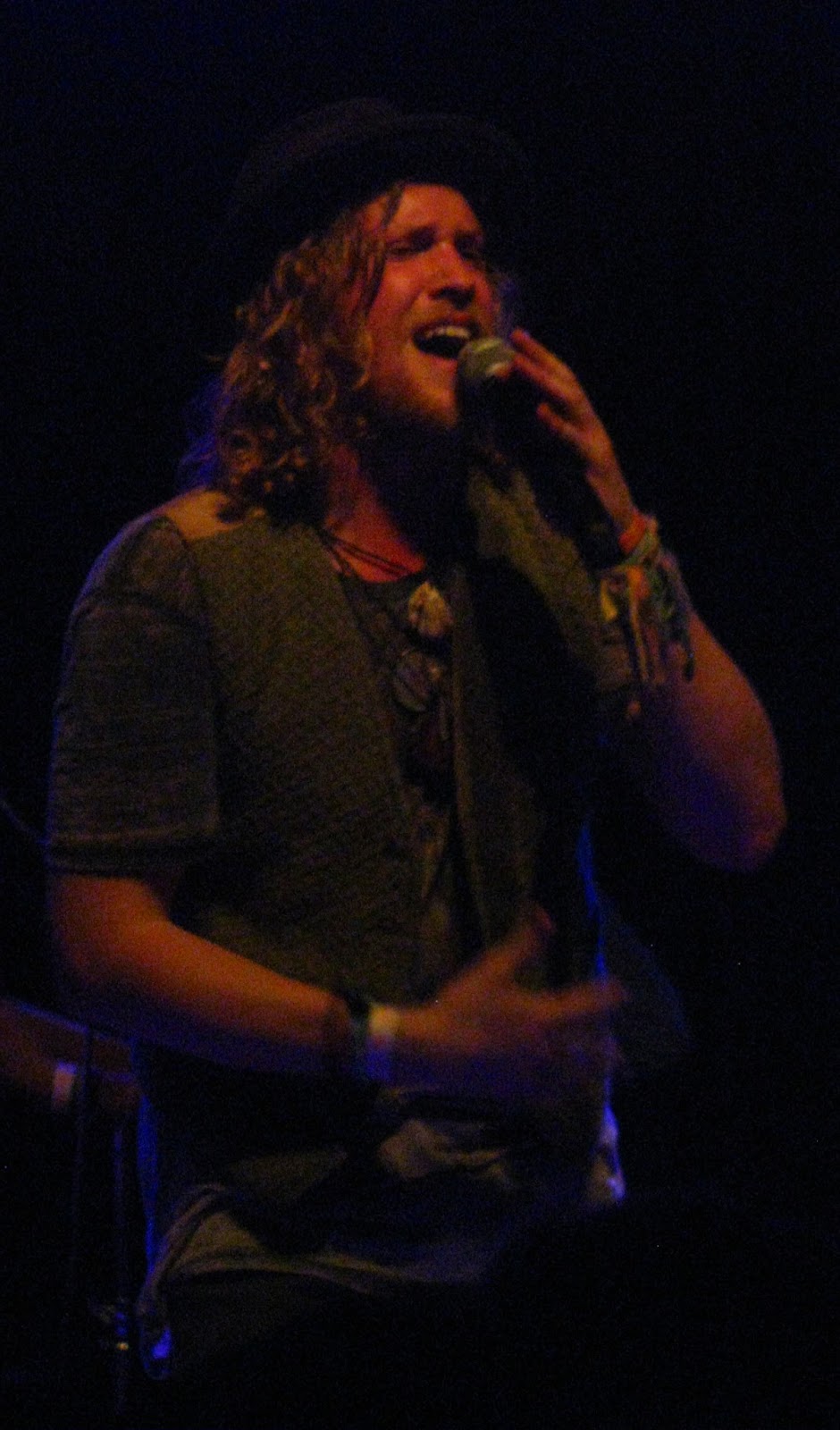 "He looks like Napoleon Dynamite, but he sounds like Stevie Wonder!"  That's how my brother described Allen Stone in an effort to get me to see him at last year's Virgin FreeFest.  Unfortunately, Stone's set time conflicted with Penguin Prison's, so my only glimpse of him came during Justin Jones' set, when I observed the bespectacled soul singer nodding his head along in a pavilion seat.  Stone left his eyeglasses on the tour bus for last night's sold-out Brooklyn Bowl gig, looking more hippie than hipster, adorned in an array of necklaces and bracelets.  With one soulful scream, he ripped open his set and demanded, "Brooklyn, New York, how the hell are you?!"  The son of a preacher man, Stone commanded the crowd with ease, loosening the audience up immediately by having them put their arms above their heads and clap them together.  Determined to give each audience member "the best fucking experience that they've ever had in their life," Allen had set himself a lofty goal, for sure.  But his willingness to take on all of our woes and worries to free us to dance and have fun definitely helped.  We chucked these burdens up at him as the band grooved into "Sleep."  The crowd was with him all the way, shouting advice to "Count sheep!" and "Drink whiskey!" in the correct spots without any prompting.  For "Celebrate Tonight," Stone introduced us to the "universal sway," a side-to-side full-floor dance move that lasted the song's entirety. 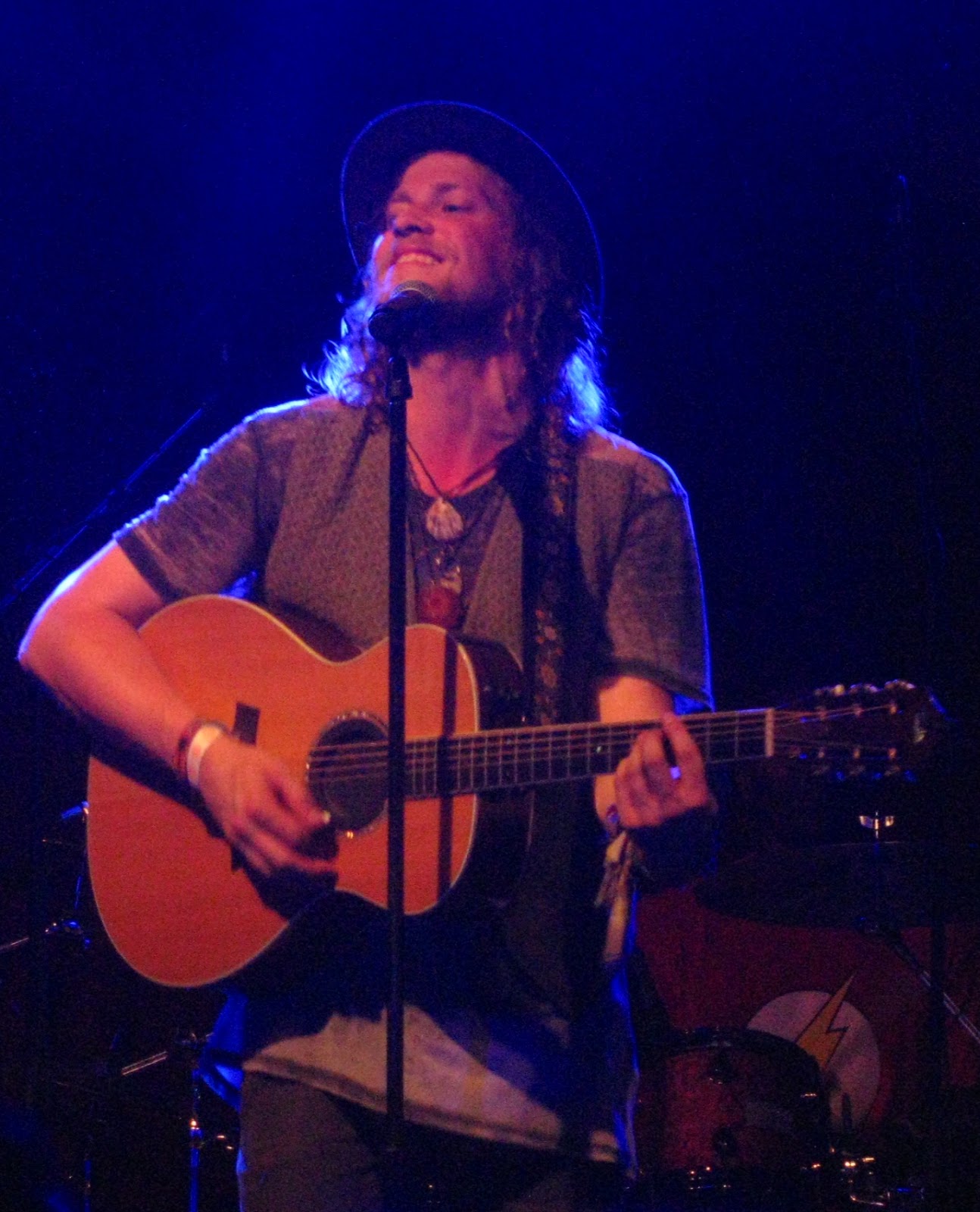 Allen plugged in an acoustic guitar for a cover of Tingsek's "Six Years," but connection problems marred the number with harsh clipping sounds.  The soundwoman provided him with a new cable for "Quit Callin Me," putting an end to the evening's technical problems.  "Quit Callin Me" provided a nice launchpad for a back-and-forth between organist Greg Ehrlich and keyboardist Josh Rawlings because honestly, what would be the point of having a Hammond organ and a Fender Rhodes onstage if they weren't going to duel?  After the funky workout, the band took a break, leaving Stone behind to perform Marcy Playground's "Sex & Candy."  I've never liked that song, but Allen made it the most tolerable it has ever been, subbing out John Wozniak's bored vocals with his impassioned voice, getting particularly melismatic on the "There she was" lines.  He followed with "The Bed I Made," a James Taylor-esque ditty, accompanied by Rawlings and bassist Brent Rusinow on harmonies, shaker, and snaps.  Allen sat his six-string down and the band returned for a joyous take on Bob Marley's "Is This Love," Stone lapping at the microphone as he stretched out the "I-I-I-I'm willing and able."  The energy continued through "Contact High" and "Figure It Out" before Stone embarked on his longest medley of the night.  Beginning with "Tell Me Something Good," Stone had the crowd sing back Chaka Khan's lyrics, and then turned things over to Jason Holt for a drum solo.  The drums led into the rocking "Nothing to Prove."  As the band played on, Allen jumped down to the floor to clear an aisle, effectively dividing the crowd in half for an "old-fashioned dance-off."  "If all you have in your dance repertoire is the two-step, you better two-step the shit out of this dance-off.  If all you have in your dance repertoire is the jump-up-and-down with the spirit fingers in the air like you just saw Dennis Rodman at Burger King, do that," he commanded.  On his count, the floor erupted into a land of 1000 dances, the musicians onstage firing off a greasy "Get Nasty."  At some point in all this, Jason Holt lost his shirt.  They transitioned into "Satisfaction," finishing with Allen performing necromancy on Greg Ehrlich as Josh Rawlings spun in circles at the Rhodes.  I'm not sure if Josh is now a permanent member of Stone's band, but he should be, judging from his tasty licks and stage acrobatics.  Stone and band left the stage to thunderous applause punctuated by lightning bolts of girls screeching.

They returned to the stage shortly thereafter, Allen thanking the crowd for supporting truly live music.  "There's no tracks; there's no laptops up here," he attested.  Closing with "Unaware," the satisfied crowd sang back to him, "Push, pull, tear."  While I may not have had the best fucking experience of my life, it was obvious that others in the crowd did.  I had a great time, and will definitely go to many more Allen Stone shows, but a dance-off is just never gonna trump sex.  I'm just not that good a dancer.