Ozomatli Play a Set for Each Generation at Lincoln Center 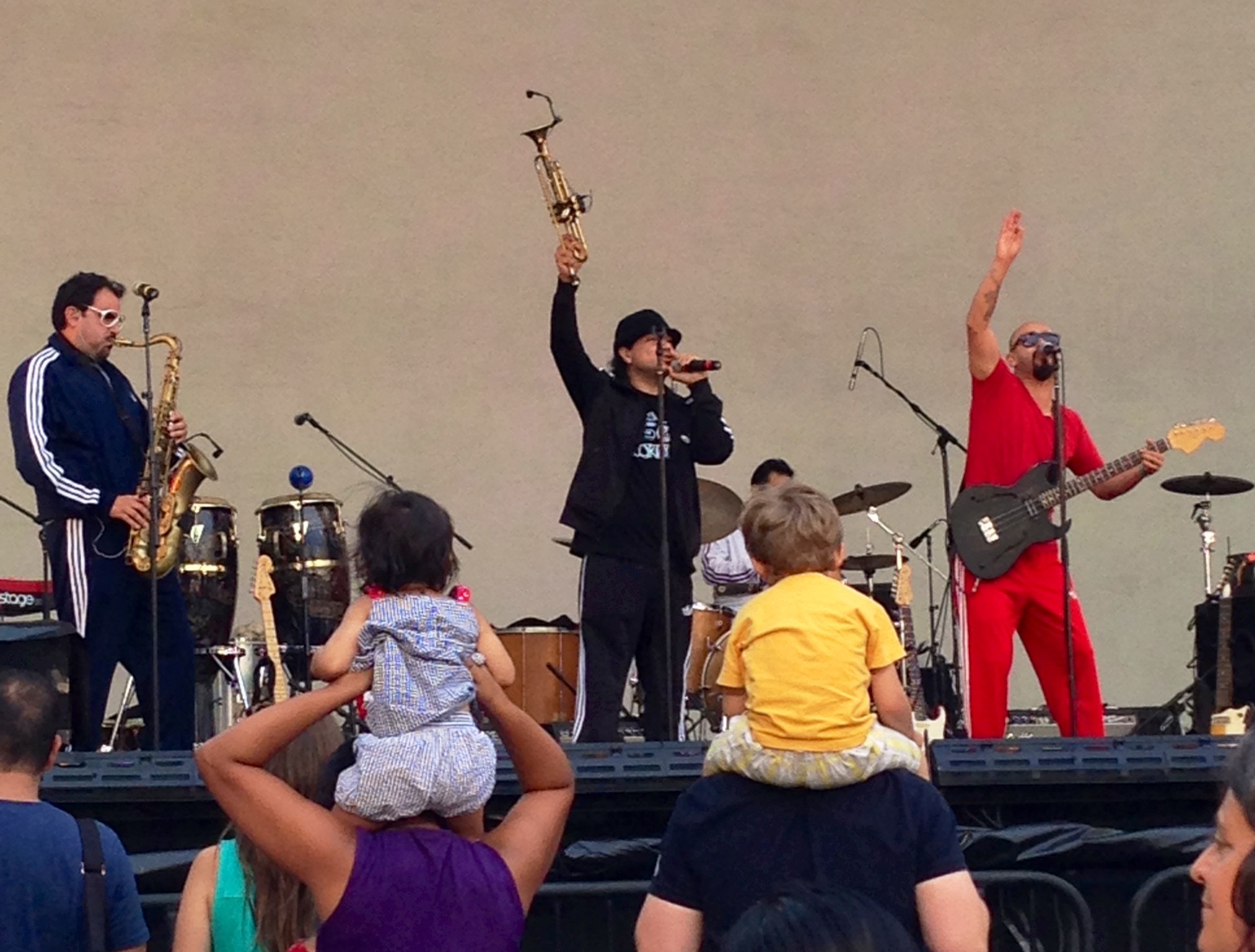 Ozomatli performed two shows—one for the kids and one for their parents—yesterday in Lincoln Center's Damrosch Park Bandshell.  Having already contributed songs to PBS Kids Rocks and the video game soundtrack to Happy Feet Two, it was only a matter of time before Ozomatli took the plunge into an entire album of children's music, 2012's Ozokidz.  While the record is clearly for its intended audience, I decided to show up early to see how an Ozo show would translate to the little ones.  Not surprisingly, very easily.  Running out on the stage in monochromatic Adidas tracksuits, each member in a different color, the band recalled a hip, urban version of the Wiggles.  They began with one of their "adult" numbers, "La Gallina," explaining it as sort of a chicken dance, throwing in extra squawks for good measure.  They interacted with the crowd like many children's TV hosts, by asking them questions like, "What's your favorite instrument?"  Incoherent shouting responded, but it was obvious the children were having fun, dancing wildly to songs about germs, exercise, and balloons.  Two more "adult" Ozo songs found their way into the set too, "Caballito" and "Como Ves," the latter on which they were joined by Dan Zanes on guitar.  As with most Ozo concerts, the band made their way off the stage and sambaed into the crowd, playing "The Hokey Pokey."  "Follow us, kids!" they yelled, as they proceeded onward.  Thankfully it wasn't an elaborate kidnapping attempt, but a chance to direct families to the merch table, where they bookended the set with the actual "Chicken Dance."  I must admit I was a tad surprised not to hear the theme to Sesame Street, which they've been known to play, but a lesson this big kid has learned is, "You can't always get what you want." 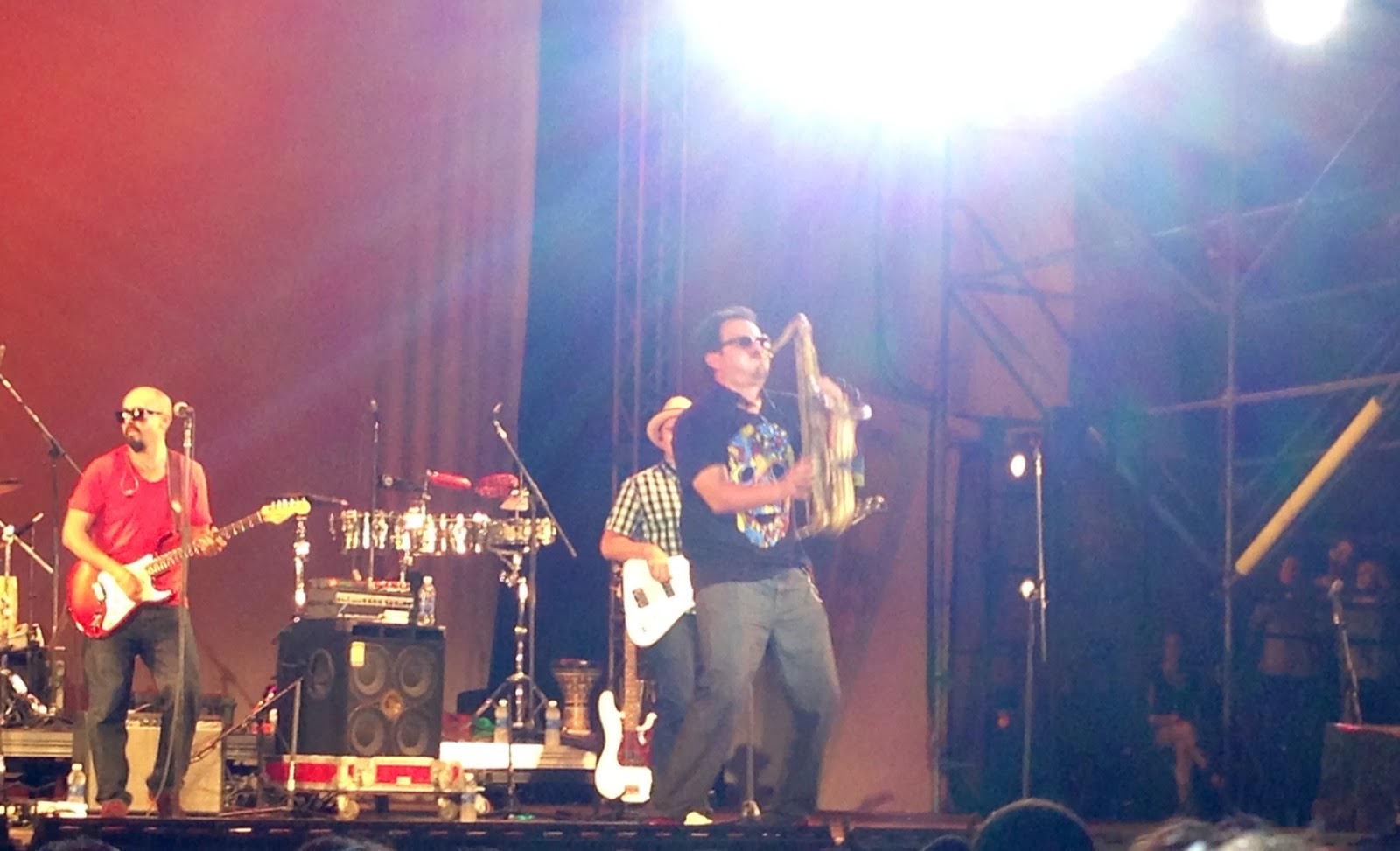 The band changed out of their matching outfits and emerged an hour or so later for the adult show, also beginning with "La Gallina."  "Come on, Lincoln Center, you don't sit down at an Ozomatli show," they urged, and everyone remained standing and cavorting for the rest.  It was apparent this show was for the adults when the band members came to the front in a choreographed thrust during "Chango."  If that didn't make it conclusive, Justin Porée turning around and shaking his ass at everyone during new song,"Paleta," did.  Along with "Paleta," the band served up a few cuts from the upcoming LP, including the reggae-infused "Brighter" and "Tus Ojos," which comes dangerously close to sounding like a Spanish version of "Crazy Train."  The show was a blast, as always, whether dip-diving-and-socializing on an actual "Saturday Night," scatting back Asdru's trumpet lines on "Elysian Persuasion," or jumping in the air during a high-energy "Nadas por Free," ironically at a free concert.  While all the members of Ozomatli were on point last night, Uli was absolutely killing it.  Any instrument he picked up, be it melodica, clarinet, or saxophone, he just lit on fire.  After supplying the melody to a surprise "Stir It Up" in "Cumbia" on his sax, he dropped another tasty solo in "After Party."  The song went its route in sampling from gems from the past like "Just My Imagination" and "Ooh Baby," and then Uli took center stage to dedicate one to the '80s kids.  "Those of you who grew up in the '90s, you're not gonna remember this shit at all," he said before ripping into a pitch-perfect "Careless Whisper."  The band invited some kids onstage to boogie down during "Como Ves" and "La Misma Canción."  One boy stole the show, looking like he was under the Cruciatus Curse as he flailed about crazily with an indifferent look on his face.  The band exited into the audience once more, teasing "Beethoven's Ninth," decidedly more adult than "The Hokey Pokey."  The band got all the way to merch table again, but this time they were completely encapsulated by fans.  When they attempted to stop playing, cheers forced them into doing one more song.  (If anyone knows what it was, let me know in the comments below.)  I guess adults can be more demanding than kids.