Jim James & the Roots Team Up at Prospect Park

Two of my favorite concerts this year have been the Roots and Jim James, so for me, it was a no-brainer to attend State of the Union in Prospect Park.  Billed as "an evening of collaborative performances," the show only featured four such collaborations, but solid sets from both acts satisfied the soggy spectators. 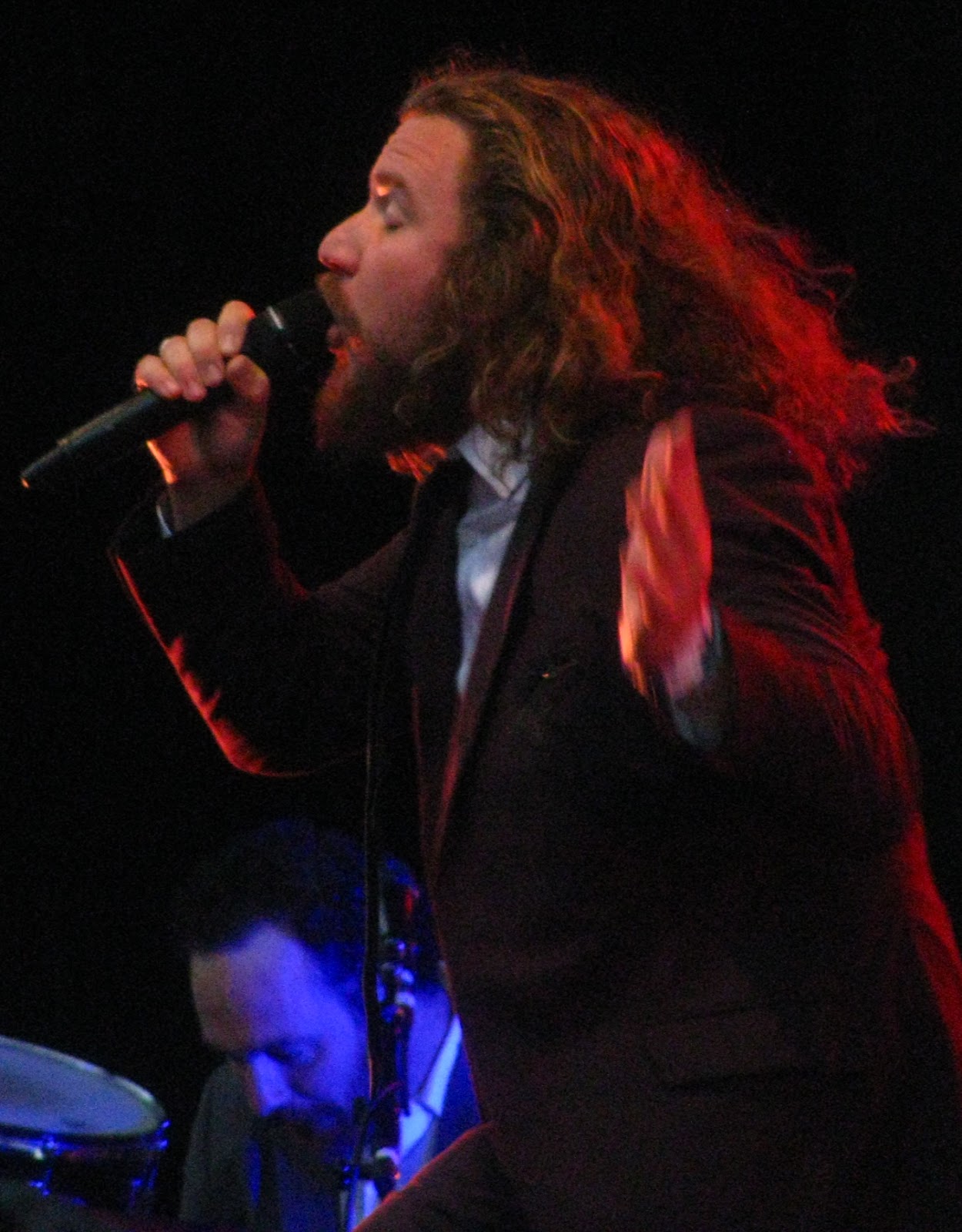 "A little rain's nothin' to be afraid of.  I think it makes it more fun," remarked Jim James as raindrops fell on the Brooklyn crowd.  "Every time we've played in the rain, we've been lucky enough to get a beautiful rainbow."  While we never got the rainbow, we did get to watch James have a blast.  On "Know Til Now" alone, he mimicked a sax solo on a real saxophone and danced around with a golden teddy bear statue held high above his head of wild hair.  If it was your first time seeing Jim James in concert, it would've been hard for you not to be completely hypnotized by the charismatic frontman.  However, I attended his fourth solo show ever, at the Music Hall of Williamsburg, so I was more interested in seeing how the band (guitarist/keyboardist Kevin Ratterman, keyboardist Dan Dorff, bassist Alana Rocklin, and drummer Dave Givan) would gel now that they'd had more gigs under their belt.  Although they didn't top the dark magic they conjured in "God's Love to Deliver" at MHOW, their time playing together resulted in a few new glorious jams by stretching out some of the other Regions of Light tracks.  After Jim James' solo on "Dear One," he left Dorff, Ratterman, and Givan onstage for a pounding three-member drum section that was then reduced to a Givan solo, packed tightly with propulsive fills.  James returned with a black towel on his head to slow things down with "A New Life," taking what seemed like a minute-long pause before delivering the final "Once more!" into the song's joyous ending.  "Of the Mother Again" benefited from some sweet vocal harmonies from Rocklin and Dorff, as well as a groovy closing trip. 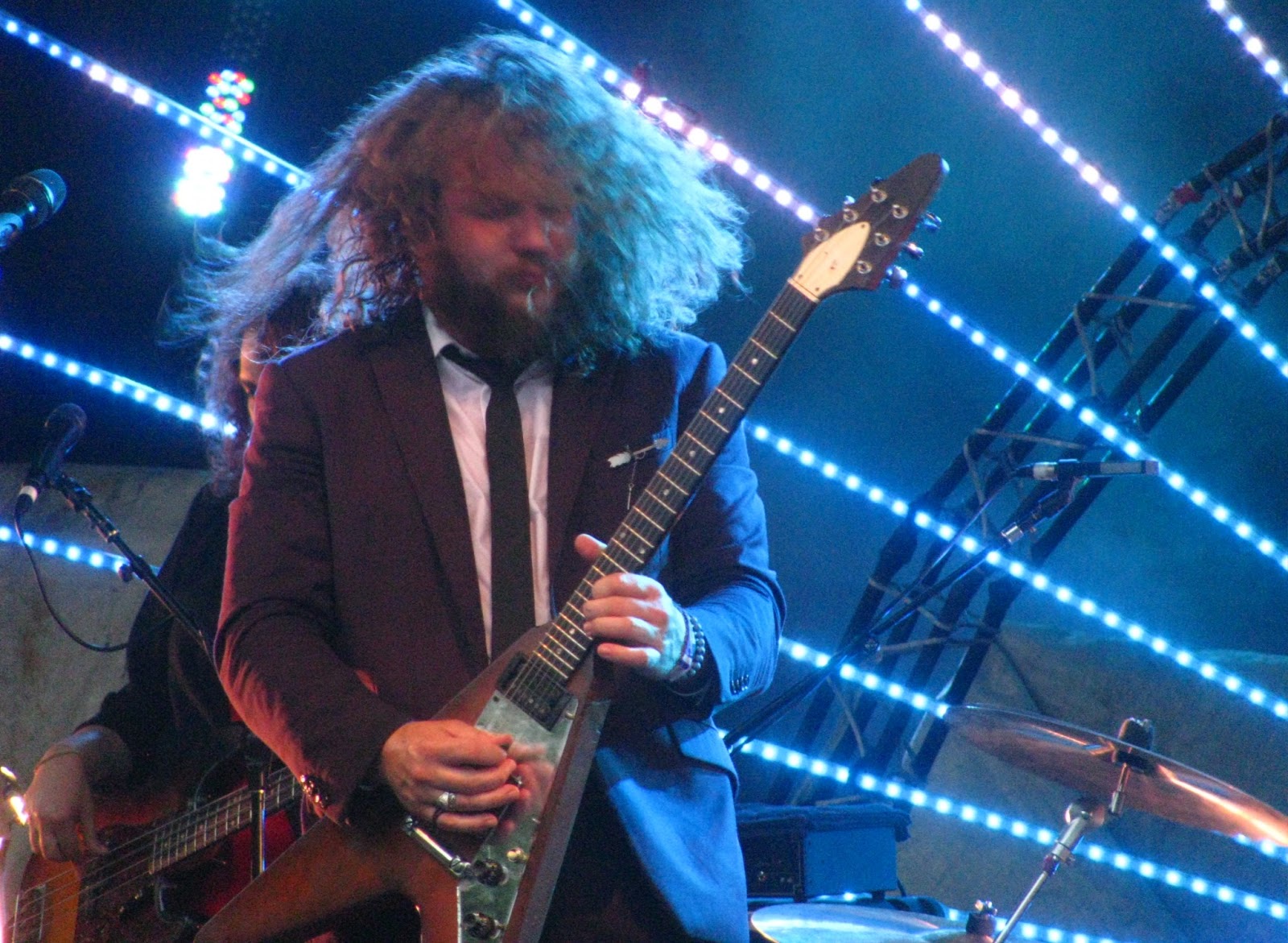 "All is Forgiven" was the standout. The band ripped open the dirge with sounds resembling the crackling electricity of the switch used to bring life to the Frankenstein monster. They continued down the macabre path with James adding some sax to the high-voltage mix before making his way into the wings.  As it turns out, Jim was the reanimated monster, creeping stiff-leggedly back onto the stage while singing the opening lines of "God's Love to Deliver." The 13-minute opus featured laser keys, a saxophone reprise, and a ferocious electric solo that had the roadie struggling to put the guitar's wireless transmitter back in JJ's suit pocket. "It's a real goddamn pleasure being out here," James said, having finished the Regions album, minus "Exploding."  He capped it off with Monsters of Folk's "The Right Place" and the Woody Guthrie-penned "Changing World" just as the rain stopped.

I was glad the storm ceased, though I knew the weather would have no effect on the legendary Roots crew. Their uninterrupted set in the rain at Beale St. Music Featival in May was the best of the fest. They took the same non-stop house party approach, albeit abridged. Pausing during "Mellow My Man," Black Thought polled the audience, "Brooklyn, y'all still with us or what?" It was a warranted question, as a snippet of "Jungle Boogie" was unfortunately the only tune that had succeeded in igniting the crowd. This made the heady keyboard jam following "Jusufckwithis" an even bolder decision, whereas in Memphis they went with a ?uestlove drum solo that whipped the crowd into a frenzy. If I had to pinpoint the moment things turned around, it was a little ways into the epic "You Got Me" sequence, the hallmark of any Roots show. Percussionist Frank Knuckles jumped from his riser and did a lap around the stage, raising his sticks in the air to elicit applause, and sprinted back to hit his cymbal perfectly in time. This lead into Kirk Douglas singing along with his guitar notes, climaxing into "Sweet Child o' Mine," where audience excitement hit an all-time high.  The Roots owned everyone from that juncture on.  The band fed off the energy of the fans, and vice-versa, creating that perfect concert symbiosis. 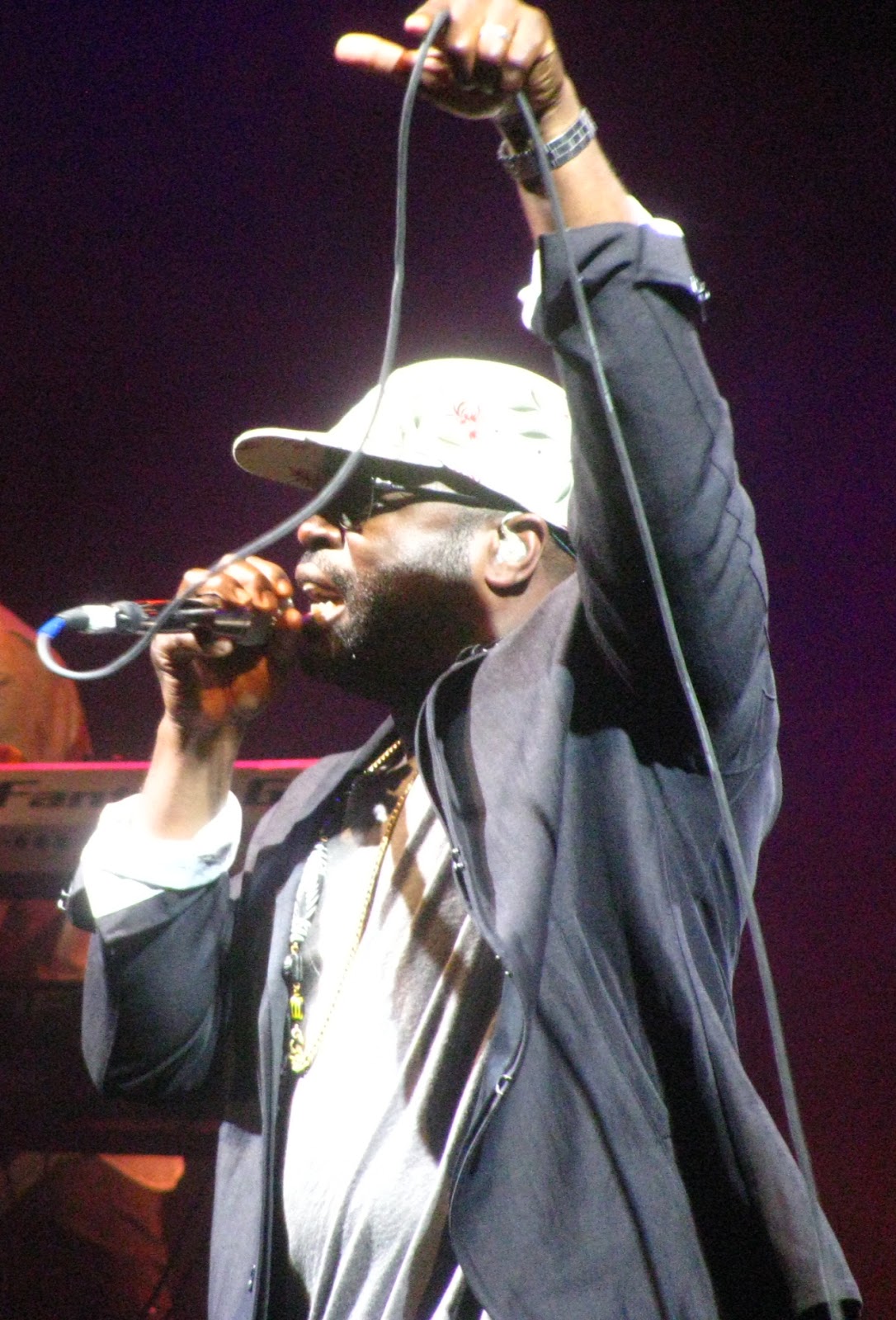 I found it a little disheartening that so much love was shown for the covers as opposed to the originals, but then again, several Roots' classics like "Proceed" and "Step Into the Realm" weren't on the setlist.  But now that we were eating out of their hands, they brought their own material back, and we lapped it up.  The crowd smiled at F. Knuckles' silent hypeman schtick on "Here I Come," but they absolutely lost their shit when the entire band broke into a choreographed dance.  Cody Chesnutt may not have performed "The Seed" at the Bandshell last week, but the Roots plunged into it with gusto, and the fans responded by singing along even louder.  Nobody cared that they were playing it safe by ending with two more covers, especially during "Move on Up" when Capt. Kirk and Tuba Gooding, Jr. leapt off of the stage and raced into the center lane that divided the venue.  "Celebrate Brooklyn! Celebrate life!" Black Thought yelled to the screaming masses.

The stage was dark, but camera flashes illuminated the lion-like Jim James smiling for photos with the band.  We kept cheering for the partnership we'd been promised, and two minutes later, the lights popped on, revealing Jim and the Roots.  They began with "Dear God," bringing to life the Roots' 2.0 version of the Monsters of Folk track. James sang the hook and even busted out some more saxophone. The Roots-James union reached its pinnacle with a reggaefied take on Prince's "I Could Never Take the Place of Your Man," so unique in sound that it wasn't immediately recognizable.  They followed with two songs James performed at last week's Bonnaroo Rock n' Soul Dance Party Superjam, Bill Withers' "Use Me" and John Lennon's "Instant Karma!" While typically a fail-safe cover, "Use Me" was a strange misstep, seemingly done in a different key.  "Instant Karma!" was good, but it was over too quickly, possibly because the encore itself was so brief.  Hell, it was only twice as long as "God's Love to Deliver."  And though I would've preferred more of the alliance, I walked home in a good mood, a Jim James' shirt in hand and a Roots' song in head. 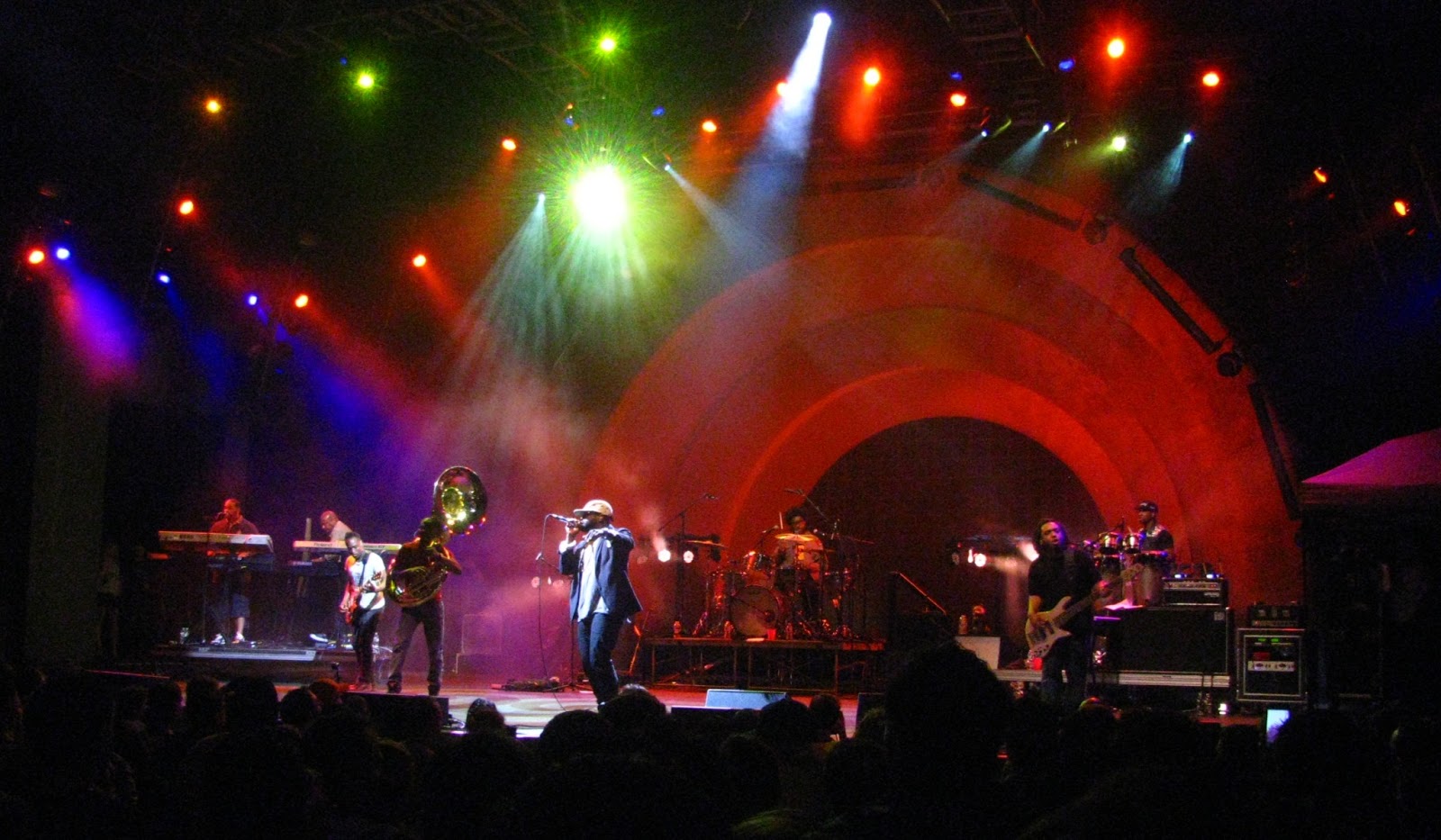