To celebrate the release of their compilation album, Set Up Shop Volume 1, Ghetto Youths International, which includes Bob Marley's sons, Stephen, Julian, and Damian, have embarked on a two-week tour.  I was lucky enough to catch them poolside at the Hard Rock Hotel in Las Vegas on Friday.

Before yesterday trumped it, it was the hottest day of the year in Vegas, with a high of 115.  By 9pm, time the show was scheduled to start, it had cooled down to 107.  But the performance didn't begin until after 10.  There's a fine line between exploiting people for money and being just plain sadistic, and Hard Rock crossed it.  Sure, you could take a dip in their cloudy pool, but if you wanted a drink, you'd have to spend $30 for a cocktail or $7 for Bud Light.  Water bottles could also be purchased for $7, but thankfully the security guard let me keep mine.  It was even hotter within the crowd, so while mist machines could've helped to cool things down, the only ones they had were in the cabanas surrounding the pool that you could rent for an exorbitant amount.


The backing band kicked things off with an instrumental "Concrete Jungle," both setting the mood and proving their capability.  A hypeman appeared and introduced the first act: dancehall MC, Black-Am-I.  He performed both of his tunes from the comp, "Samson Strength" and "Modern Day Freedom," the latter of which allowed him to show off his singing skills.  Jo Mersa was next, but he'll need a bit more time to live up to his musical lineage as Bob's grandson.  Although he rocketed out with "Bad So," aggressively spitting fire like Buju Banton, the momentum couldn't be sustained for "Comfortable," where his sup-par singing voice and unique pronunciations of words rendered the song incoherent.  Christopher Ellis proved a more fruitful branch on his family tree.  The youngest son of Alton "the Godfather of Rocksteady" Ellis, Chris emerged wearing an Elvis t-shirt, and eased into Gregory Isaacs' "Willow Tree."  The UK crooner kept the lovers rock going with his own "End of Time."  Though the lyrics were quite generic, his voice was so smooth that you forgave him, especially when he closed by singing "I really got to thank you" multiple times to the crowd.  Wayne Marshall, a Jamaican deejay who's been at it for over a decade, was also feeling the heat.  "Las Vegas is hotter than Jamaica," he said with a smile after performing "OK" and "I Know."  He segued from "Overcome" into "No Letting Go," a tune by another Wayne, Wayne Wonder.  It was nice to finally hear the crowd sing along.  He wrapped up the medley with "Sufferer," a track he'd done with Bounty Killer.  Julian Marley finished off the first set with four modern roots songs, dancing around joyously, the light catching his dreadlocks as he spun.  "One of my favorite colors is green," he said, cueing green lights to bathe the stage for the marijuana anthem "Boom Draw."   He closed with the powerful "Jah Works," singing, "None of the riches of the world can stop Jah works," almost in direct defiance of the ostentatious, hedonistic city. 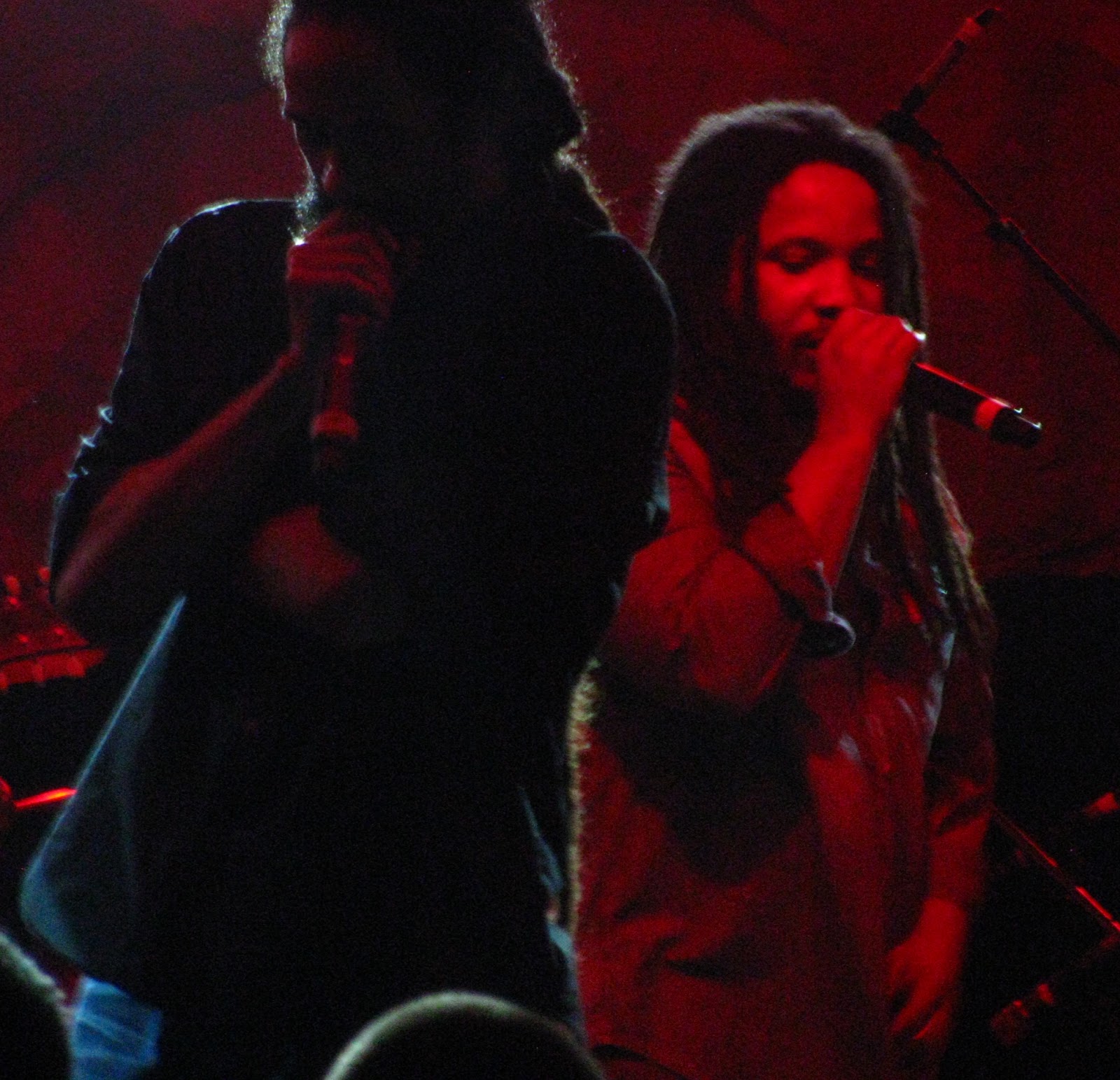 For set two, the band dusted off "Sun is Shining" before bringing out Damian "Jr. Gong" Marley for his opening salvo.  The four-song assault began with the incendiary "Confrontation" before transitioning into his Skrillex collab "Make It Bun Dem," which gave way to compilation-namesake "Set Up Shop," and completed with "More Justice," the crowd providing the "Read all about it!" to his "Extra! Extra!"  It was great to see an artist so genuinely enjoying the crowd participation, Damian politely asking, "Can I see the hands up one more time, please?"  Too many of the hands, however, were holding cellphones (and even iPads!) to record the performance, so many that it was like I was watching the show through a bunch of little TV screens.  It was just one facet of a shitty audience that included an obnoxious drunk wearing only briefs, who would periodically jump in the pool and then rub against you until he got back to his spot, as well as short girls who called me a motherfucker for blocking their view even though they were at the back of the crowd.  (I've said it before, and I'll say it again: If you want to be in front of me at a concert, let me know that you can't see because you're short; not because I'm tall.  I didn't get to choose my height.)  Jr. Gong was able to transcend the assholes and the heat with a trio of love songs, with Christopher Ellis playing the Bobby Brown role on "Beautiful."  To ensure us he wasn't going all soft, he commanded, "This one dedicated to warriors only," before launching into the fiery "Dispear."  After a trio of Bob songs, the band kicked in with the organ riff from "Exodus" that begins "Move!"  "Oh, yes," said Marley, nodding his head.  He didn't feel the crowd was getting into it enough, so he had the band unravel the song and restart it, which actually subdued things even more, the only misstep Gongzilla made all night.  But he followed it with his best performance of the evening, slowing his rapid-fire vocals down to criticize politicians, scientists, doctors, and the media with "Patience."  His flag-waver spun the pre-'74 Ethiopian flag behind him, creating interesting patterns as he obscured the light. 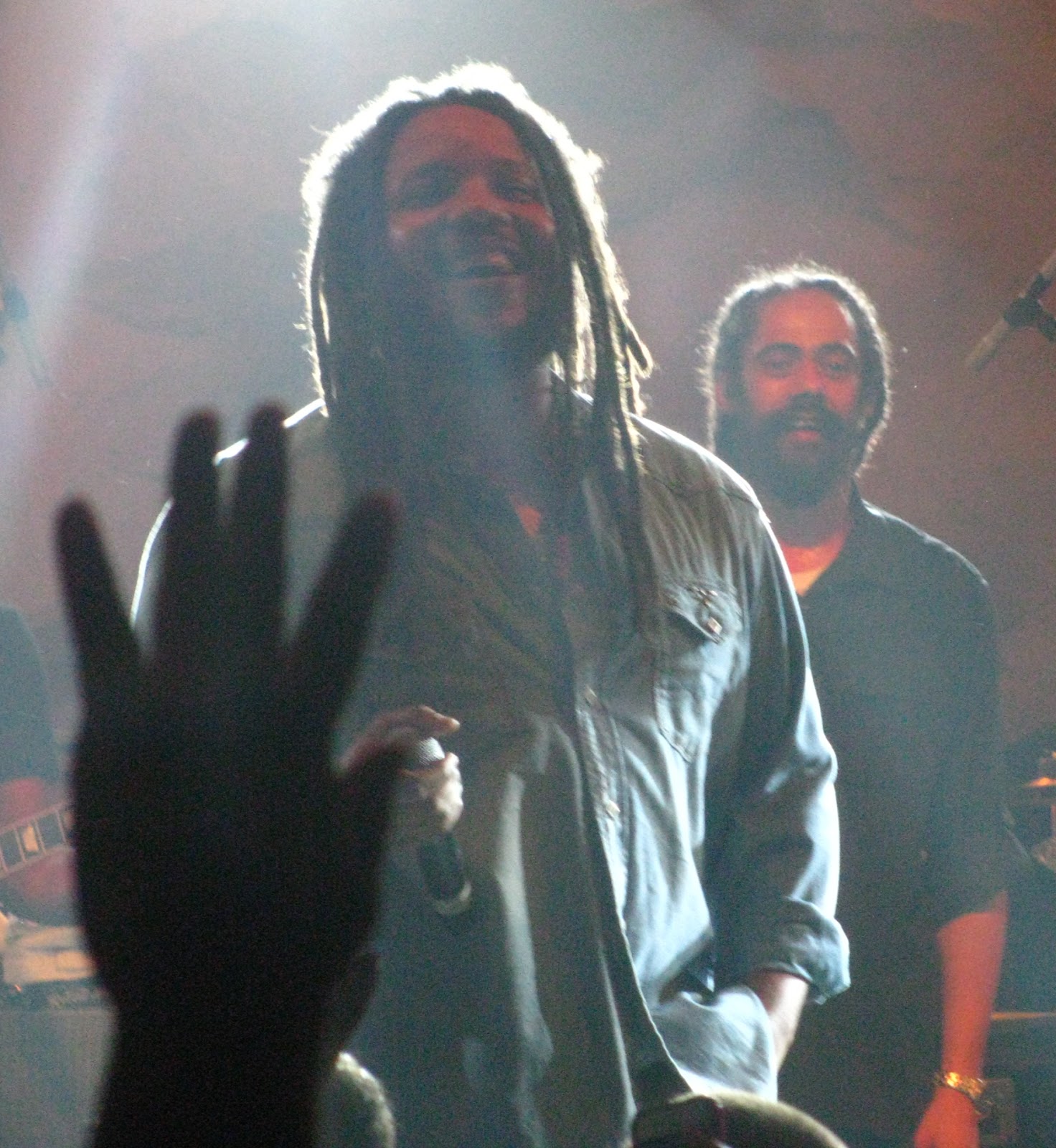 Forty-six minutes in, Jr. Gong announced, "Right about now, we're gonna take the show up another notch," inviting his older brother Stephen to the stage.  "From Las Vegas to Jamaica," sang a heavier Stephen, launching into "The Mission."  The brothers found their way into "The Traffic Jam," and were joined by surprise guest Spragga Benz to finish the song and preview the new "Bongo Nyah."  They finished off the four-song run with "Jah Army."  Sadly, the medley included the only songs played from Stephen's discography, which was strange considering his top-billing.  He did seem a little dazed though, occasionally dropping lyrics, so maybe the heat had gotten the best of him.  He stuck around to help Damian with the rest of the set, and the duo were joined by all the Ghetto Youths for "Could You Be Loved," each singer taking his turn to toast.  Despite everything going on around him onstage, Jr. Gong was still fascinated by the crowd, remarking "Sweet" each time the crowd sang back the hook.  It was, well, sweet.

Gratefully, they didn't make us wait too long for an encore, Jr. Gong returning to take us down the "Road to Zion."  At the end of the road, we were welcomed to Jamrock, which invigorated the crowd in the way Damian had been yearning for the entire evening.  Splashes from the pool behind me soaked my back as we all cheered "Murderrrrr" together.  I was finally unified with the crowd, the perfect send-off to my Vegas vacation.