While several music fans were saddened by the day's news of the closing of Maxwell's, the Bowery Ballroom joyously celebrated its 15th anniversary last night with a sold-out show by Lissie. I was initially surprised by the turnout because I didn't realize that so many New Yorkers were familiar with the Illinois songstress, but after the stellar performance, I totally understood why they spent their Monday evening with her. 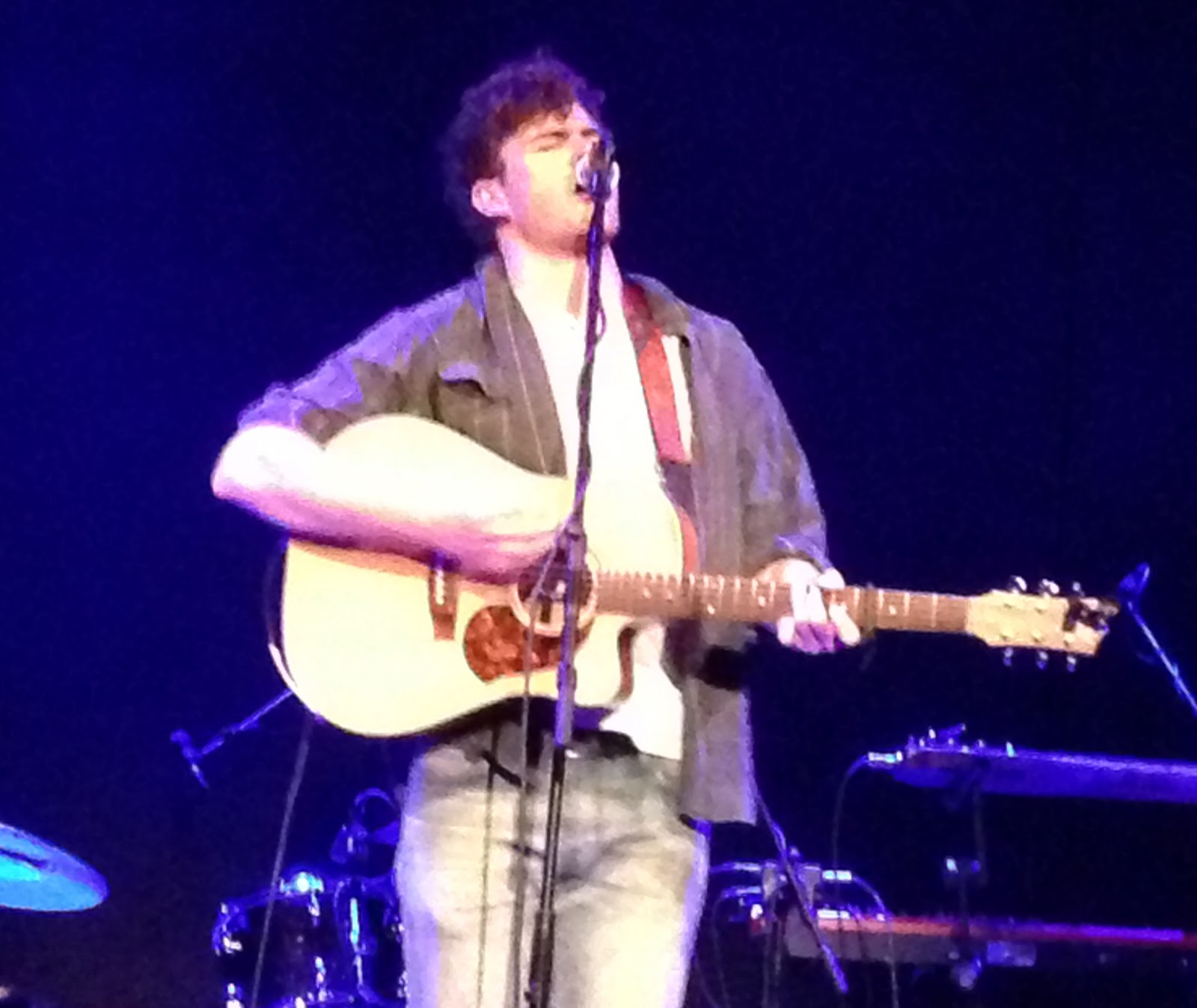 Australian singer/songwriter Vance Joy opened the show. (Please be advised that the Bowery's backstage clock has been running approximately ten minutes fast, so show up early to ensure you don't miss anything.) "This is my first song... obviously," said Joy, setting off a string of fingerpicked melodies starting with "Emmylou."  He debuted "We All Die Trying to Get It Right," a rumination on the Frank Sinatra quote about Judy Garland: "Every time she sings, she dies a little; that's how much she gives." Vance would do well to take some pointers from Miss Garland.  He was a fine singer and guitar player, but he couldn't seem to take it to that next level... without changing his instrument.  He switched to ukulele for the catchy "Riptide," which captured the noisy crowd's attention, but before you knew it, the song had ended and he was walking offstage.

At 9:46, the lights dimmed, and Angelo Badalamenti's theme to Twin Peaks sprouted from the speakers.  As the instrumental came to a close, the room darkened completely and the soundtrack shifted to "Teach Me How to Dougie."  Cute Lissie with her wavy golden hair, the epitome of the girl next door, ran onto the stage with her three-person band.  The jagged guitars of "The Habit" kicked off a set heavy on new material from an upcoming September release. "I wrote it last September. It's about darn time," Lissie revealed excitedly.  The new tunes were even better than her old ones, especially "Sleepwalking," which floated along on a '70s groove and perfectly showcased Lissie's tremendous voice.  Her vocals aren't subtle, but she belts so powerfully in pitch with just a hint of country twang, that you just stand there in awe (when you aren't dancing).  The older numbers were also perfectly on point.  "Little Lovin'" culminated in a foot-stomping, hand-clapping singalong that would've made Grace Potter stop and take notice.  New single "Shameless" was an ovaries-out rocker, which entrusted bassist Lewis Keller as a one-man rhythm section, furiously fingering the frets as he stomped at the kick drum and hi-hat pedals.  Lissie was clearly having a great time on "I Don't Want to Go to Work," kicking out in front of her and leading her fans on a chorus of "I don't want to go to work! You don't pay me what I'm worth!" as Eric Sullivan noodled along on guitar. 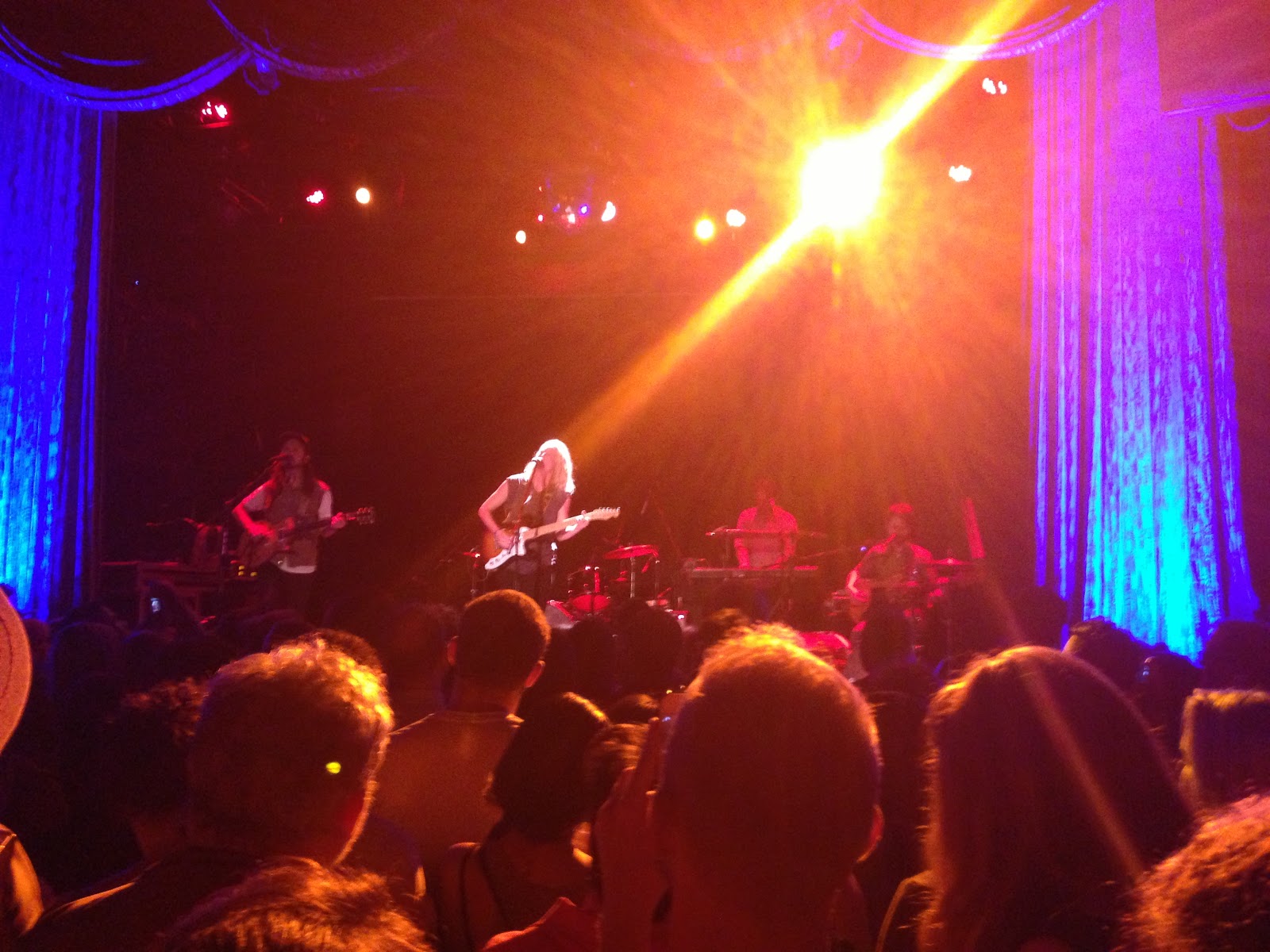 Despite how hard she rocked, she always seemed down to earth, vigorously rubbing the sweat off her face with a towel and taking swigs from a mug of cold tea.  "I'm so hot," she said, humbly adding, "Temperature, not sexiness. I just get grosser and grosser as the show goes on."  She slowed things down for "Everywhere I Go," the disco ball spinning fireflies around the room, creating a harmonious vibe that was only broken by some double-fisting asshole bumping into people as he squirmed through the audience.  Lissie finished the set with "In Sleep," which allowed Sullivan to shred the shit out of his solo.  "Thank you so so so much. Peace!" Lissie yelled, throwing up a deuce as she departed.

It didn't take long for the applause to morph into cheers of "Liss-ie! Liss-ie!"  She returned with her band a minute later.  "You guys went straight into the chanting my name. Thank you. I love that." A shout from the right side of the crowd. It turns out that the tall guy who had weasled his way to the front had gone to school with Lissie, she had liked him, and he blew her off. "Best kiss you've ever had? Let's not divulge all my secrets to the crowd," said Lissie with an embarrassed laugh.  He continued calling out to her, but now, after twelve years, Lissie was in control. "We'll talk about that later. I've gotta play this song," she said, beginning her ode to America's largest river, "Oh Mississippi."  I will admit that I've never listened to Kid Cudi's "Pursuit of Happiness" because his blasé stoner drawl doesn't appeal to me.  I've never been a fan of singers that sound bored singing their own songs (Here's lookin' at you, Lana Del Rey!), which is exactly what makes Lissie's version of "Pursuit" such a treat.  Shouting the lyrics through gritted teeth in her commanding voice, she literally gave me chills when combined with the parabolic guitar lines.  I had only been a casual fan at 9:46.  By 11:00, I was texting friends to let them know what an excellent show they had missed.

ENCORE -
Oh Mississippi / Pursuit of Happiness
at 1:31 AM