I'd seen Rogue Wave live before, but never headlining, so when they announced two NYC dates, one at Music Hall of Williamsburg and one at Bowery Ballroom, I chose the superior venue.


The opening band, Caveman, sounded like they were frozen in 1988 and recently thawed out. Fortunately for them, it wasn't as much of a culture shock as Brendan Fraser experienced in Encino Man... or Blast from the Past. Hipsters have embraced the music of the much-maligned '80s because it's ironic to do so.  And the Brooklyn dream pop band did an excellent job of recreating that 4AD sound, with Matthew Iwanusa jangling away while Jimmy "Cobra" Carbonetti made splashes in an ocean of reverb.  I found myself bored by them, though, because they were totally anachronistic, refraining from adding anything modern to their tunes.  I can understand using elements from the genre as a base from which to build, but music shouldn't be entirely nostalgia.  This argument is complicated by the fact that the musical landscape hasn't changed much stylistically in the past ten years.  I would argue that dubstep is the closest thing the 20-teens have to a decade-defining genre, but in spite of its recent mainstream success, it began in the late '90s.  (Not to mention, it sucks.)  So is there really a reason for revival acts like Caveman?  Only if you're looking to cast a fictitious band to play the prom in an '80s high school movie. 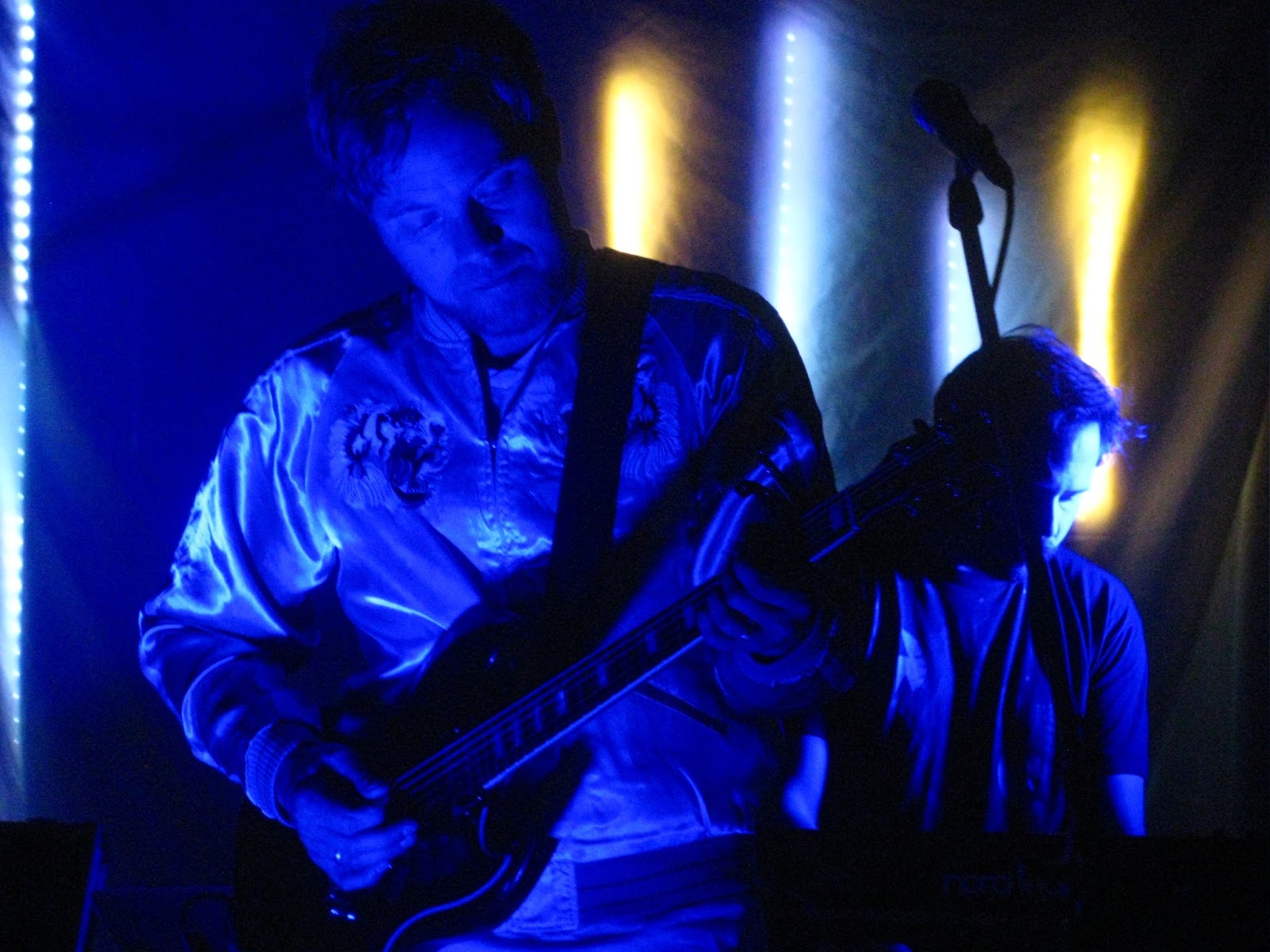 If Zach Rogue's satin jacket with embroidered tigers hadn't been somewhat of a giveaway, once Rogue Wave began playing, I immediately understood why they handpicked Caveman to open.  The swirling drone that ushered in "Siren's Song" marked a new direction for the Oakland band: shoegaze.  Unlike Caveman, however, they didn't directly copy the style, but folded it into their established sound.  The lighting design was strangely abrasive and alienating, with the band members cloaked in shadows until illuminated by sporadic blasts of color.  It would've worked better in a larger room.  The moments of brightness afforded glimpses of the afro-ed Pat Spurgeon, the man behind those big drums so characteristic of Rogue Wave.  They followed it with another Nightingale Floors track, the even-hazier "S(a)tan."

Rogue Wave are a talented group of musicians with the ability to modify their compositions to fit whatever style they're going for.  On their iTunes Exclusive EP, they "exhumed and groomed" several songs from their debut, adding full-band layers to what was essentially a Zach solo effort.  So when it came time to play one of their most beloved songs, "Eyes," they morphed it to fit the sound of the Nightingale tunes, adding in a heavy dose of reverb and some ethereal chords from the keyboard.  When you could see them through the darkness, they wore smiles on their faces, having fun sandwiching a tease of "Nobody Does It Better" in between "Nourishment Nation" and "Publish My Love." "We did that 'cause Pat's such a big Carly Simon fan," Zach revealed at the medley's end. "I love the album covers," Pat chimed in.

Unfortunately, it wasn't as fun for the crowd.  People on the floor repeatedly shouted out requests in between songs, but most went unacknowledged.  One persistent crowdmember got lucky, as Zach attempted to appease him by singing the first four lines of "California." "Keep going!" yelled the fan.  "If you had been here at soundcheck..." Zach trailed off, referring to a deal where if you purchased four tickets to the show, you'd gain exclusive access to the soundcheck. But in a venue as intimate as Bowery, which Zach admitted was one of the best in the country, you shouldn't have to come to soundcheck to connect with the band.  "What I should do is put a setlist out before we play, and you would write the songs down," Rogue suggested.  "We should do that," he mused, almost to himself, seriously contemplating the thought.  "Chicago x 12" kicked off a run of four Asleep at Heaven's Gate tracks to finish off the short set.  In the middle of the song, Rogue tossed a vaseful of flowers out into the crowd.  It was almost like Zach was a shamefaced husband, attempting to solve the problem by literally throwing flowers at it.  The Heaven's Gate numbers received the best response from the audience, but instead of catering to the cheers, the band returned for an encore of three more new ones.  "Everyone Wants to Be You" was the final tune, slowly building to its climax of crunchy distortion and Rogue's screams.  It wasn't a bad show, but it was underwhelming.  I hadn't heard the new record yet (The vinyl is still being pressed.), so maybe I just need to spend some more time with it?  Regardless, if they do end up playing an audience-setlist show, I'll be there in a heartbeat.  And I'm writing down "I Can Die."