I got to last night's sold-out Generationals show at Bowery Ballroom in time to see a few songs from Pepi Ginsberg's new band, Companion.  Their penultimate number, "Swimming/Wave," was my favorite, with the rhythm section hitting a danceable groove as effects-heavy guitars swirled around on the surface.  It was the shining moment in a set where Ginsberg's vocals often went over the top.

"This is our first time in America.  We're really fucking excited to be here," admitted Splashh's frontman Sasha Carlson, looking quite young with his Snoopy t-shirt and floppy haircut.  His bandmate, Toto Vivian, donned a Sonic Youth longsleeve, and as they embarked on their guitar-centric first tune, the London band displayed a strong Daydream Nation-era SY influence.  Over the course of forty minutes, Splashh tore through nine feedback-drenched songs that some critics have pegged as shoegaze, but it's shoegaze cranked up to 11.  And cutting through all the noise, a strong pop sensibility that at times recalled Oasis.  An incredibly solid debut performance on this side of the pond.

Arrested Development's "Mr. Wendal" ushered Generationals onto the Bowery stage.  Speech dropped out, and the band dropped into the jittery "Ten-Twenty-Ten."  Generationals play the kind of music that makes you just sort of give up on the genre field in iTunes and resort to typing "Indie."   Put Phoenix, the Cure, and New Order in a blender and set it to "pulse."  I preordered their latest album, Heza, and though I hadn't listened to it much before yesterday, it gets better on every repeat.  I can see it becoming one of my go-to's this summer if it ever gets fucking warm out. 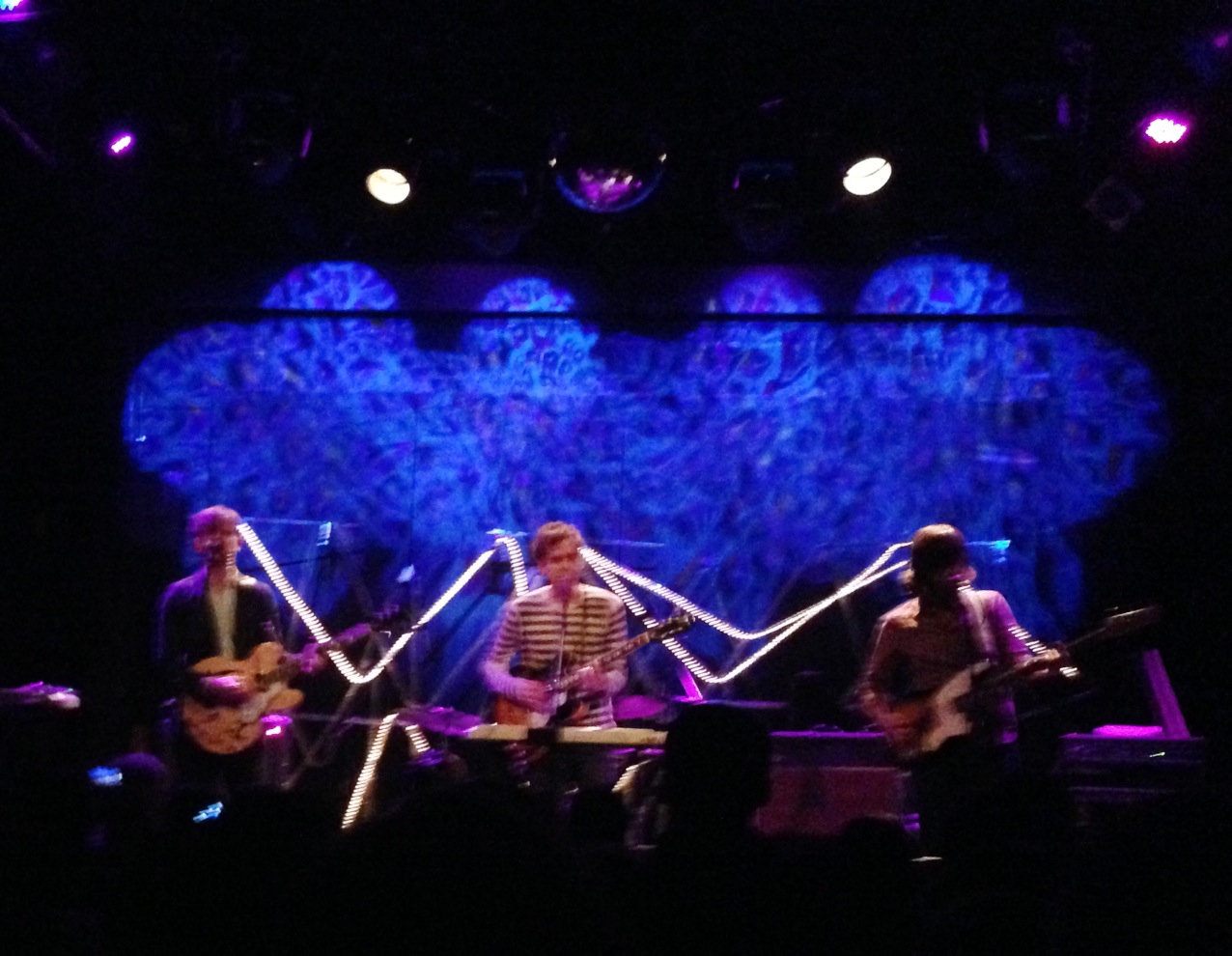 In front of an alternating web of Christmas lights, which gave the whole thing a slightly Winterfest of Lights vibe, they played several tracks from Heza.  Most got a good crowd response, especially harder rocking ones like "I Never Know."  It was a bit of a challenge to come down after the powerhouse of Splashh, but once Generationals settled into their back catalogue, the fans and the band fired up.  "Angry Charlie" and the crowd-pleasing "When They Fight, They Fight" were followed by a cover of Frank Black's "Headache," though that was lost on the mostly hipster audience.  They recovered with "Faces in the Dark" and "Trust."  "This is our first show at Bowery Ballroom.  We'll always remember this," said a gracious Ted Joyner before they left the stage.

Applause brought them back for an encore, Ted saying, "There are a couple more we could do, so thank you."  Then they played their best song of the night, "You Got Me" from the new album.  Synthesized claps blended with human ones from the crowd as Joyner sang, "Every single night, you got me aching all the time."  A nicely placed bit of maraca from their drummer gave it that little extra push into greatness.  Sometimes it's the little things.  Next came the juicy synth sound of "Yours Forever," which had fans singing and bopping along so much that it had to be the last song.  At its finish, I looked down to my phone to note the show's end time, and then peered up to see Joyner strapping on his guitar.  "We're gonna do one more for you guys.  This has been a very special night for us.  This is first song, first record," Ted announced, plunging into "Nobody Could Change Your Mind."  At the song's end, the band walked offstage.  Without skipping a beat, Biggie's "Hypnotize" came on over the PA, and the dancefloor erupted.  The effect was that someone had taped over your "best of hip-hop" mixtape, but instead of being pissed off, you had a new summer mix and a story to tell.

I went down to the merch table, where I found Toto from Splashh sitting on a chair.  "What time is your show at Pianos tomorrow?" I asked.  "It's early.  7:00.  But you should come," he said with a smile.  "I don't think I'll be off yet," I said, lamenting my new job.  "If not, we're playing Shea Stadium at 10:30 or 11.  Do you know that place?"  WHAT?!?  I'm a little ashamed to admit that I got all the way home before remembering that the Mets now play at Citi Field.  It turns out there's now a venue/recording studio in Bushwick called Shea Stadium.  Generationals will be at the Rock Shop in Park Slope tonight.  Go see either band.  I think you'll be pleasantly surprised.

SET -
Ten-Twenty-Ten / Put a Light On / Lucky Numbers / I Never Know / Awake / Spinoza / Angry Charlie / When They Fight, They Fight / Headache / Faces in the Dark / Trust

ENCORE -
You Got Me / Yours Forever / Nobody Could Change Your Mind
at 1:11 AM