They Might Be Giants Play "Puppet Head" at Rams Head Live

I've seen They Might Be Giants live more times than any other band.  So when my trip to Maryland coincided with their concert at Rams Head Live, I happily ordered a ticket. 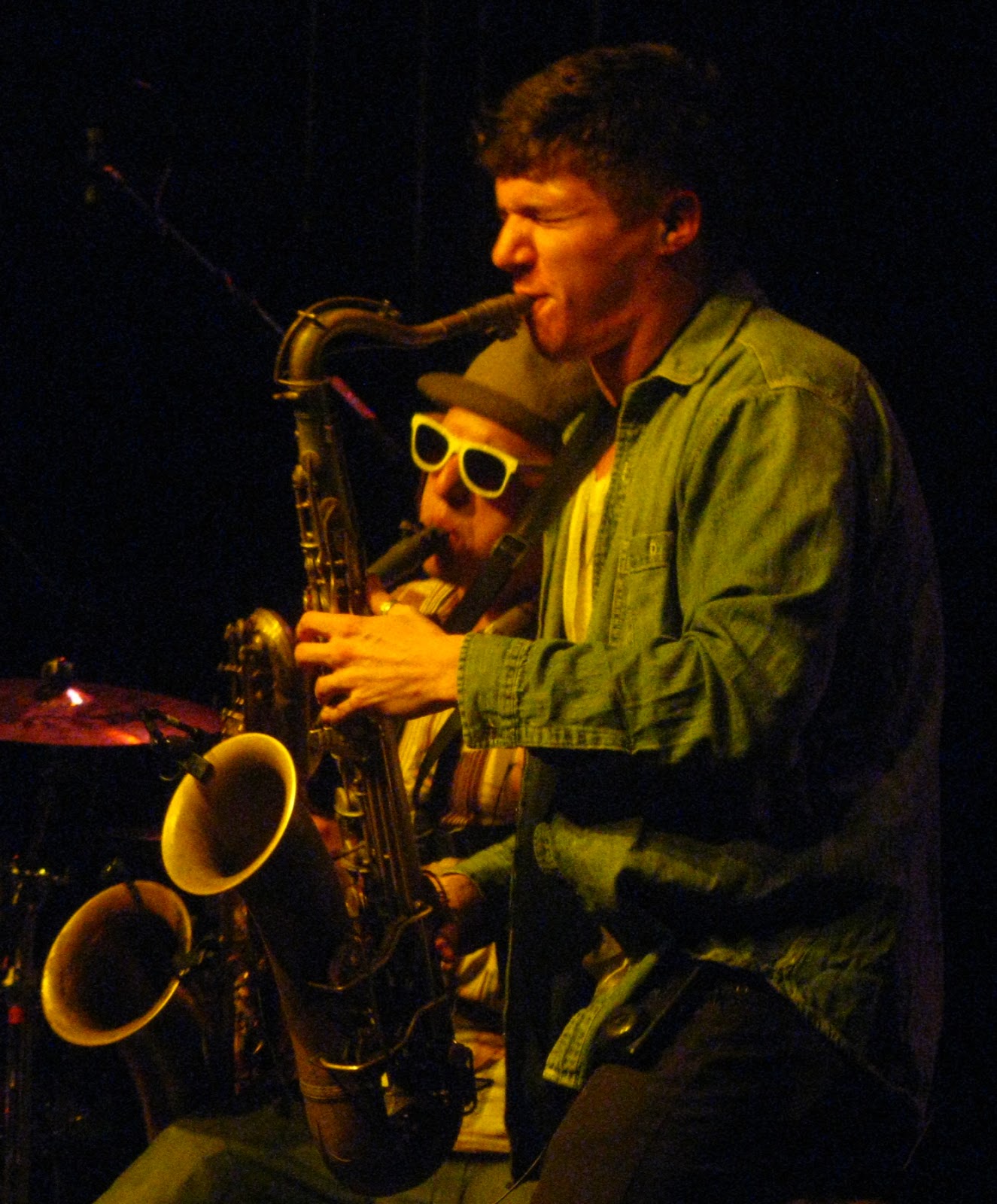 I picked up my ticket at will call, and grabbed a spot at the bar to watch opening act, Moon Hooch.  New York City subway performers until they were snatched up by Mike Doughty for his Yes & Also Yes tour (I actually saw them at Brooklyn Bowl.), Moon Hooch consists of two saxophonists and one drummer.  The saxophone has gained a false sense of nostalgia from hipsters not old enough to actually remember the '80s sax solo, but if you're grooving to Moon Hooch (and lots of people were), it has nothing to do with irony.  They're doing new things with the saxophone, taking it deep into house territory, and putting that electronic dubstep shit to shame.  They call their style "cave music" because it's "more wild, more jagged, more free, and more natural to live in" than a house.  If they're opening a show you're going to, make sure you get there early.

The current five-member incarnation (two Johns, two Dans, and a Marty) of They Might Be Giants kicked things off with the power pop sounds of "You're on Fire," the first track on their latest LP, Nanobots.  TMBG have been doing a lot of publicity for the album, so it was a fitting icebreaker.  Imagine my surprise when they followed it with Factory Showroom's "James K. Polk," with all members bowing in unison at its conclusion.  "You know, we don't know much about Baltimore," admitted Flansburgh.  "But in between here and the hotel, I walked through an intense pocket of adult entertainment."  Linnell likened it to something out of The Wire, while Flans was convinced he had taken a trip on a "scumbag time machine.  I'm from New York City, and I'm usually not scared someone's gonna take my phone."  They then turned the focus inward to the three-tiered layout of the venue: "I'm getting a future science fiction courtroom vibe.  Welcome to the Star Chamber," mocked Flans.

After "The Guitar," which went on a disco tangent, John F. introduced a high-wattage handheld spotlight as a "piece of South American medical equipment."  While Flansburgh divided the audience down the center with the beam of light, Linnell revealed, "A lot of bands are about bringing people together.  We're about pulling them apart."  The left side of the room was instructed to raise their fists and chant, "People! People!"  The right side played the role of the "Apes!"  I was in the center in front of the soundboard, so I was forced to make a decision.  I'm proud to say that in the "Battle for the Planet of the Apes," I moved right and took part in the unprecedented victory for the apes.  "Choke on that, people!" exclaimed ape-leader Flans.

In front of the video backdrop of an extreme close-up of a human eye, Linnell picked up his bass clarinet for "Cloisonné," with Danny Weinkauf taking his place on keys.  When the Dans traded spots and Linnell strapped on his accordion, I knew it was time for "Doctor Worm."  Segueing into "The Famous Polka" and then "Whistling in the Dark," it was one of the rare moments of the show that flowed well.  On paper, the setlist seems a good cross section of their career, but it wasn't conducive to building momentum.  It may have had something to do with the sound in the club.  The bass should've been much louder, at least as loud as it was for Moon Hooch.  In any case, the crowd just didn't seem that into it, and that was reflected in the performance of the band.  The moments of sheer joy on the faces of the Johns that I've so regularly witnessed were few and far between.  Also noticeable was the lack of f-bombs from Flans, but I've seen them do kids shows with more energy, so that may be irrelevant. 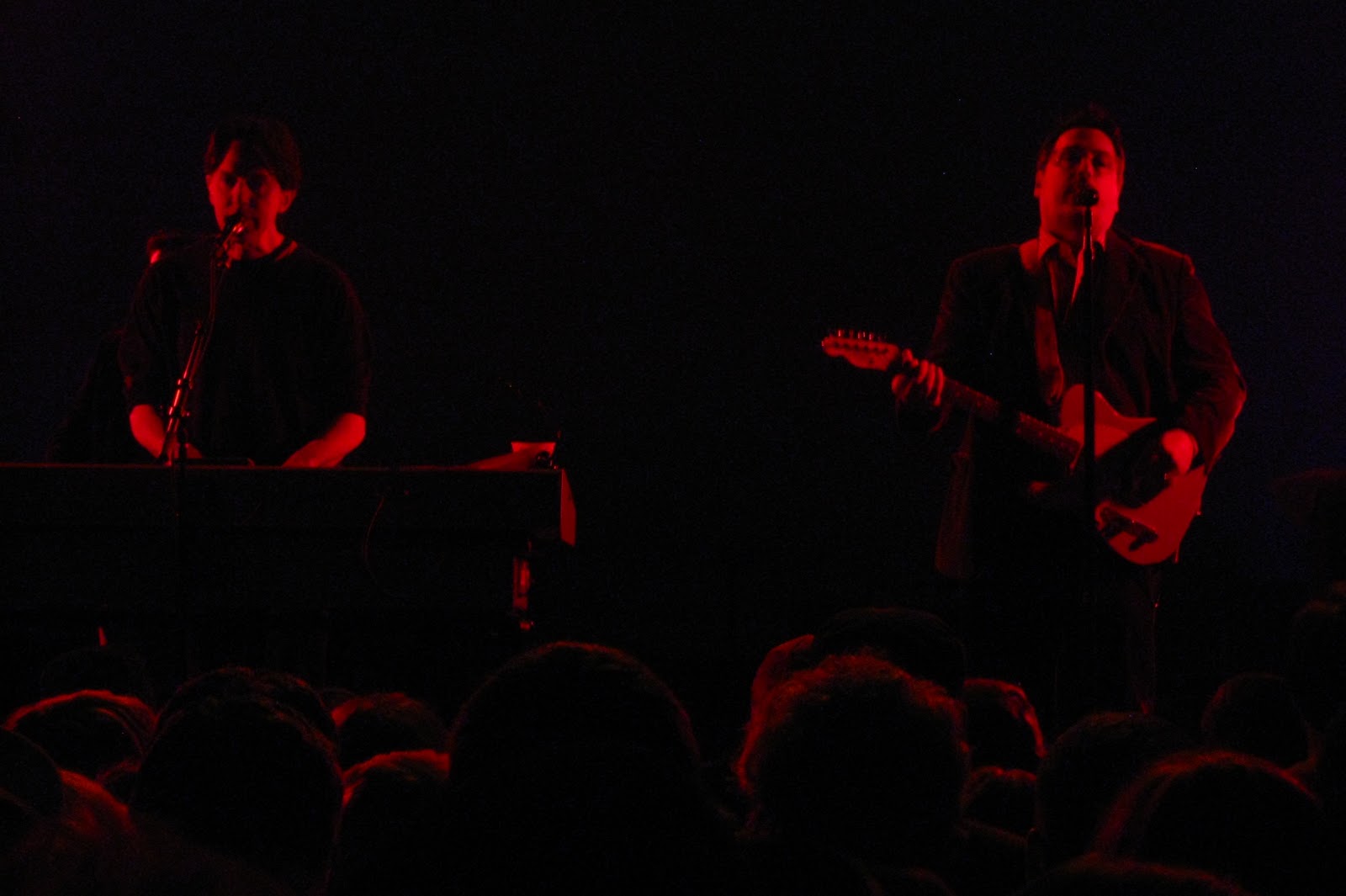 When Linnell pulled out the Kaoss Pad, I had hope for "Wicked Little Critta," but was let down to hear "Insect Hospital," the shortest song they chose to play from Nanobots.  But hey, at least they didn't do "Didn't Kill Me."  Then the Johns put down their instruments and picked up their sock puppets to perform as the Avatars of They.  After cracking jokes about the SCOTUS, they sang "He's Loco," which I'd never heard before, and actually enjoyed a lot.  "Nanobots" went directly into "Birdhouse," and the crowd lost it.  There was the energy they'd been searching for!  Yelling "Puppet Head!" at a TMBG concert has become the equivalent of yelling "Free Bird!"  So it was strange that the only time I haven't heard someone shout it, they actually played it!  Maybe we just need to not request it?  Regardless, I was stoked to finally hear it live for the first time.

The polyphonic lines of "Lost My Mind" were nice, but the band introductions that followed meant the show was nearing its end.  They took the opportunity to run it into the ground, announcing, "I feel like we should have some sort of music for this portion of the show, but we don't."  Having scoped out the crowd earlier for "Battle" ("How many people can have glasses and beards at the same time?  You NPR-loving hippies!"), they tried their hands at discovering the "true nick names" of select concertgoers.  Flans dubbed a fan on the floor "Dianasaurus Ross," and Linnell singled out a balcony member as "Nutella."  "That's funny 'cause I was gonna say Nutello," said John F.  "That's the masculine form," John L. countered.  It was funny, but it wasn't the right time for it.  Though announcing Tesla's name was met with cheers from the nerdy crowd, by the end of the song, the excitement had died.  When "Damn Good Times" is your savior, that's something to worry about.  They attempted to do do a vertical wave over the balconies, but it was done without the enthusiasm of the classic "Violin" waves.  Too little, too late.

I believe this was my 21st TMBG show, so I'm obviously going to be critical.  But something was off for this show.  I'm still pumped for the upcoming in-store in Brooklyn though.  I wouldn't see a band twenty times if they weren't good live.  It was just an off-night.