Before last night's show at the Bowery Ballroom, the last time I'd seen Matt Costa was at Music Hall of Williamsburg.  My brother and his wife came up from Baltimore, and we had to reserve a table because my sister-in-law was six months pregnant.  The baby kicked for the entirety of Matt's set.  She was born three months later, and she'll be 5 in June.

When you start listening to an artist from the time they come out, you develop a relationship with them similar to that of a parent with a child.  You're immensely proud of them and you want to share them with all your friends.  As the artist continues on their career, some of their decisions may make you miss the baby sometimes, but you realize it's not entirely up to you.  For in fact, both a child and a singer-songwriter have minds of their own, so you can either respect that, or put them up for adoption.  Over the years, Matt Costa has evolved, from the acoustic folk of his debut, to the piano tracks of Unfamiliar Faces, to the baroque pop of Mobile Chateau, to his latest eponymous record, which sounds like Belle & Sebastian teaming up with T. Rex to play sea shanties.  After last night's gig, I'm pleased to report that I'm still proud of my "son."

I didn't get to see much of the opening act, Vandaveer, but the D.C. duo played songs in the classic American folk style.  How classic?  Well, they're releasing an album of public domain murder ballads the end of the month.  You can check them out here.

I did, however, catch all of the Blank Tapes.  The brainchild of Matt Adams, the Blank Tapes make California pop full of jangly reverbed guitar, big drums, and vocal harmonies, but with a lo-fi twist.  Since the start, Adams has been very DIY, from recording on cassette tapes to drawing his own album art.  He even used to play all the instruments, but in the past year, he's added D.A. Humphrey on bass and the adorable Pearl Charles to keep time with a mallet in each hand on drums.  "We're from the West Coast, so we figured we'd bring the beach party.  We know you guys have a nice beach yourselves," said Pearl.  "No, we don't!" yelled a crowdmember.  Even if our beaches have been significantly washed away by Hurricane Sandy, the Blank Tapes would also make an excellent soundtrack to a Brooklyn rooftop BBQ.  The set consisted mainly of songs from their upcoming album Vacation, but also a few too new even for that, like the psychedelic "1000 Leather Tassels."  I bought a vinyl to listen to on days when I wish it were sunny.

Matt Costa took the stage ten minutes earlier than the announced 10:30 set time (It seems fashionable to start early now.), and sat down at the keyboard for "Mr. Pitiful."  One of my favorite MC songs, it was taken to a different place with the addition of some spooky pedal steel by Jay Kardong.  Kardong was the unsung hero of the night, never stealing the spotlight, but adding just the right touches to the tunes, like putting an orchestral feel on "Early November" or supplying a supernatural intro to "Behind the Moon."  The band made every song sound fuller, providing the perfect environment for Matt's lilting voice.  "Golden Cathedrals" was absolutely beautiful, with all its layers coming together to create the sonance of hope. 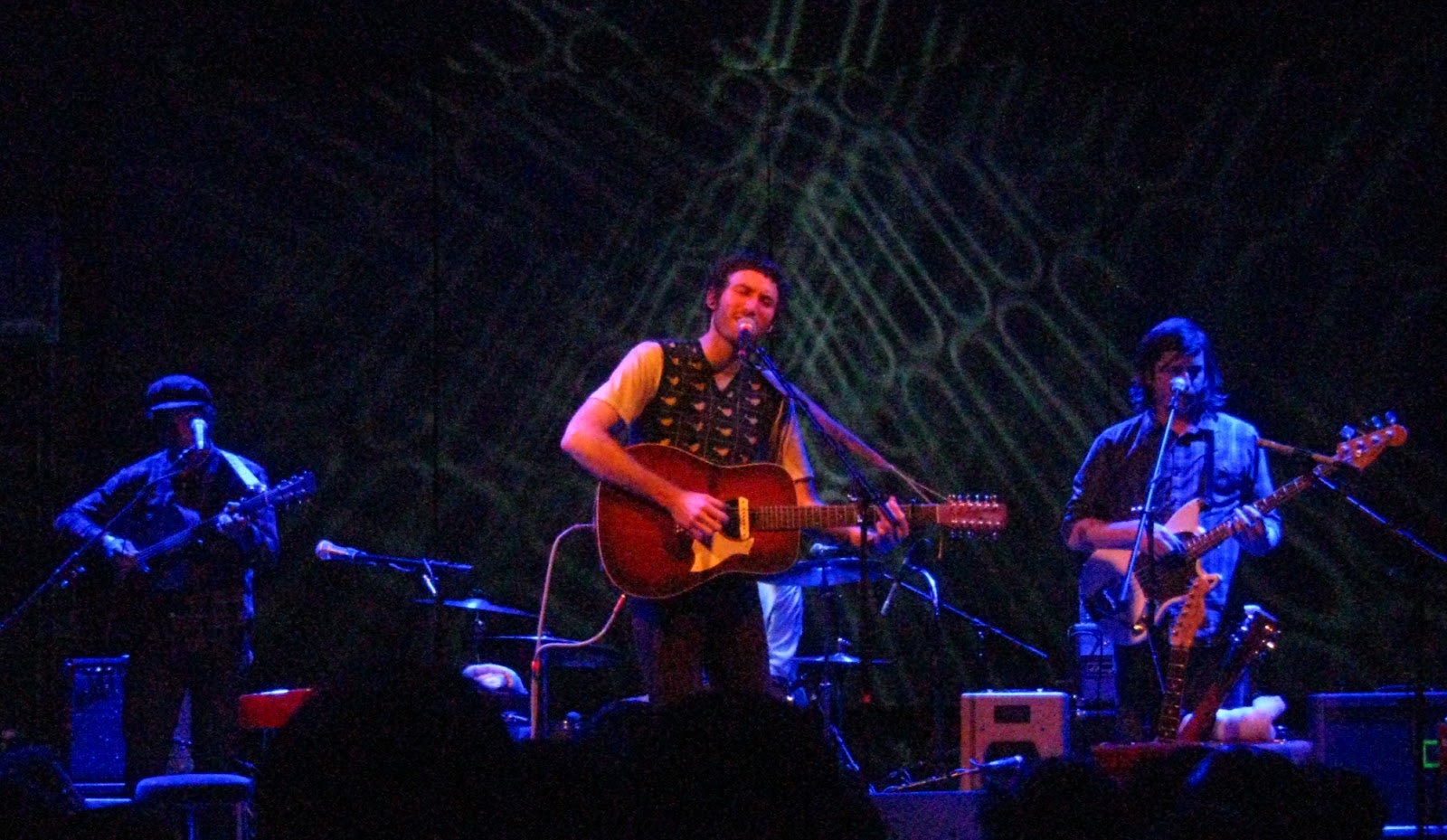 When attempting to start "Clipped Wings," Matt halted, announcing, "We have a cymbal problem."  "What kind of symbol?  Like an equals sign?" said some girl in the crowd.  "Phases of the moon and things," responded Matt.  "What's your sign?" shouted the girl.  "This is like a first date right now," laughed Matt.  "What's yours?" he questioned.  "Virgo!" she exclaimed.  "You're a virgin?  That has nothing to do with it."  Someone suggested he tell a story, but he didn't know where to begin: "That's why I write songs.  So I don't have to tell very many stories."  The cymbal issue was fixed, but Matt revealed, "I've got a story on the brain now."  Six years ago, an ex-girlfriend had buried his 4-track recorder in the backyard of the place they were living, and he'd like to find it, but "It was just a rental.  I can't dig up someone's backyard."

Kardong grabbed a banjo, and the whole band gathered around a microphone center stage.  After a little harmonica from Costa, they jauntily made their way into "Miss Magnolia."  Remember when I saw that amazing Ken Stringfellow show two months ago?  Well, I incredibly found myself in the front row again once Costa descended onto the floor to sing.  It's a singalong, but no one wanted to overpower the unplugged Matt... save for one drunk drunk girl who slurred out a "Miss Magnolia" at the completely wrong time.  Matt gave her a friendly smile, and finished the song.  He made his way back to the stage, offering "Well, now that we're more acquainted," before playing "Sunshine" to the delight of the audience.  After "Sweet Rose," some girls up front asked, "Can we just say something?"  "Like collectively?" questioned Matt.  "We just wanted to say that it's been a long time since we've heard music this good."  Oh, drunk girls.  Matt replied, "I'm going to answer collectively.  You guys are the nicest people I've ever played to in my whole life."

For the encore, Matt started with a story about stealing his father's bottle of Maker's Mark as a child.  Strumming an improvised tune, he told of how he took it to a nearby pier to drink with his friends.  As he cracked open the wax, his friends bragged, "'Oh, yeah, I've had that before.  I've gotten so drunk.'  But we were like 12 or 13."  After three shots, they stumbled off the pier, turning a 15-minute walk home into 5 hours.  It was a fun setup to "Whiskey & Wine," which he played solo.  He brought the band back for "Mobile Chateau," and said goodnight.  All in all, a great show that could've been a little longer, but hey, it was a school night.